Mary-Kate and Ashley Olsen have yet another new project: denim-based secondary collection under the Elizabeth and James contemporary label. 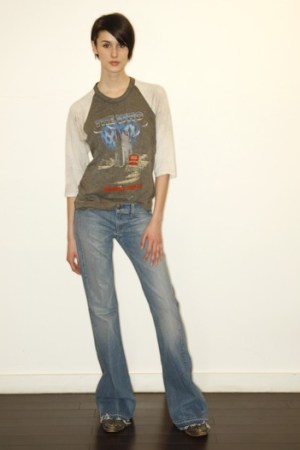 In two weeks, Mary-Kate and Ashley Olsen will stage their first fashion presentation for The Row, and today their junior brand, Olsenboye, finally launches at J.C. Penney. Yet there’s still one more project to announce: a denim-based secondary collection under the Elizabeth and James contemporary label.

Named Textile Elizabeth and James, the three-jean lineup, which launches in March, zeroes in on Seventies styles — the Hendrix, with a slight bell-bottom; the low-slung Stevie, and the cropped, high-waisted Joni. The amusing inspirational twist here: These designs stem from actual jeans in the Olsens’ own wardrobe, with one pair dating back to their high school years.

The Stevie, for instance, features dark pocket impressions, with the actual pockets missing from the front and slightly shifted in the back. “[The original] was reworked for them in high school,” said Jane Siskin, president and chief executive officer of L’Koral Industries, which produces Elizabeth and James as well as Olsenboye. “They didn’t like where the pockets were so they moved them.” The collection, which wholesales from $106 to $111, will be launched exclusively at Bergdorf Goodman, Neiman Marcus and Intermix.

In the fall, the Olsens plan to roll out a full lifestyle collection for Textile. “We’re talking about the favorite things you want to wear with your jeans, like the ultimate flannel shirt,” said Siskin. The recently launched Elizabeth and James men’s collection, meanwhile, will be repackaged under the Textile umbrella, with less suiting and more casual- and outerwear.

“Elizabeth and James is a name the customers really relate to,” said Siskin. “To give them this other piece of their wardrobe, with the same brand, is an easy connect.”