The new factory currently employs 60 people with the goal of hiring 1,000 people in five years. 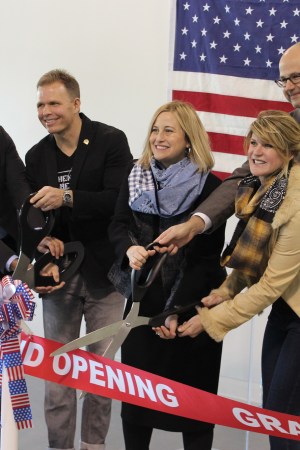 The closest the hipsters of  “It” city Nashville typically come to a “Made in America” apparel label is when they shop at vintage stores — here a 1960s Jantzen swimsuit, there a hat from some milliner of yesteryear. Fifty years ago, almost all of the clothes purchased in the U.S. were made domestically.

Now only 2.6 percent of clothing bought by Americans is made in the U.S., according to a recent American Apparel and Footwear Association report.

Wegner, the president and chief executive officer of 21-year-old clothing manufacturer Omega Apparel Inc., recently put his dreams of “Made in America” into a second physical space. The original facility is in Smithville, Tenn. Omega’s new factory, at 5225 Harding Place, is five minutes from the Nashville airport (to better serve out-of-town clients) and its floor-to-ceiling windows allow passersby to view employees operating sewing machines.

“When you come here, you can see what we’re all about,” Wegner said.

The location currently houses 60 employees. Wegner’s goal is to raise that number to 1,000 within five years.

Wegner purchased Omega Apparel in 2012 after an exhaustive search for a business that would keep him in Nashville. His prior corporate jobs with Mars Inc. and Procter & Gamble Co. had kept him, and his family, on the move.

A West Point graduate and retired Army Ranger, Wegner has no fashion experience. But he’s always been passionate about job creation.

“That gives us an opportunity to have a positive impact on people’s lives,” he said.

The Department of Defense has long been the largest client for Omega Apparel and the firm is the top producer of dress uniforms for the armed services. But Wegner’s vision is one of diversification. The four categories upon which he wants to focus are military, commercial, the Omega brand and private label.

In the commercial arena, his firm services large companies, such as VF Corp. and Alfred Dunner, as well as start-ups, including actress Reese Witherspoon’s new line, Draper James.

Wegner said, “A lot of the focus in the commercial area is on small-batch production catering to the Nashville design and entrepreneurial community.” Nashville is home to a burgeoning fashion industry. Stymying growth, however, is the lack of reliable production in the area.

A project Wegner sees as part of the solution is the Sewing Training Academy, a collaboration between the Catholic Charities of Tennessee, the Nashville Fashion Alliance and Omega Apparel. New sewing operators are trained through this public-private partnership, then hired by Wegner.

Wegner said, “Without the help of the Sewing Training Academy, and support and partnership in areas like that, I would never be as bold to say we’re planning on hiring 1,000 employees in the next five years. Because it’s too expensive to do it on our own.”

To help him move forward, Wegner hired Shelley Sarmiento as chief strategy officer four months ago. Sarmiento was among the founding members of the White House | Black Market retail purveyor of women’s clothing, shoes and accessories.

Sarmiento said, “We’re reinventing the ‘Made in America’ industry right now. It’s not that people aren’t doing it. We’re just doing it differently and on a large scale. I think we have a recipe for success.”

“We want to be a catalyst,” Wegner said. “We want to rebuild this industry.”