ENKNYC Preview: Ones to Watch

These eight brands are introducing new lines or innovative collections for spring 2012. 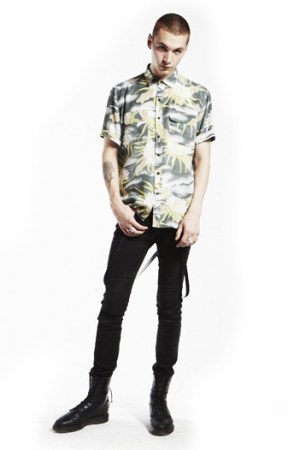 “The reaction to the women’s collection continues to be amazing, and, as a result, everyone started requesting men’s,” said Azria of the line, which aims to combine French sophistication with a breezy California vibe. “It turned out to be a natural progression — there was a void in the men’s market.”

The initial spring collection takes inspiration from Seventies and Eighties Pop Art with vivid prints, stripes and plaids. Other styles in solids have military details, such as flap-front chest pockets and sleeves that roll up and tack. Retail prices range from $168 to $268.

“Overdesigning has been kept to a minimum. More isn’t always better,” noted Azria.

Despite the mischievous, masculine name, the designer behind the new bag line Insubordinate Lads is actually a 29-year-old woman named Rissy Woods. She and her English-born husband, Matthew, 36, who runs his own hedge fund, started work on the company in November.

“I’m inspired by English dandies in their heyday — people like Oscar Wilde and Beau Brummel,” said Woods, who handles the creative end of the company while her husband oversees finances. “But I’m redefining the look in a more sophisticated and cheeky way, using color and textured leathers.”

There are 14 styles in the spring collection, with each design available in various leathers or colors. Bag shapes include briefcases, city totes and vintage doctor’s bags, as well as an iPad case and document portfolio.

Materials include calf hair, pebble leather and crackled leather with corners trimmed in contrast studded leather. Another group is fashioned in linen canvas and trimmed with shirting fabric. Some bags have contrast shirting fabric on the interior, while others incorporate details from English brogue shoes as design flourishes. Retail prices range from $225 to $750.

Woods studied accessories design at the Fashion Institute of Technology, which was followed by work stints at J. Crew, Hobo International and Isabella Fiore.

“Women’s is such an oversaturated accessories market, but we thought there was a real niche for a men’s brand that was dressy but hip,” said Woods.

Yves Chareton founded Paris-based Hartford in 1979 and built the casual, stylish brand with his fresh takes on men’s classics like military jackets, faded oxford stripe shirts and Fair Isle sweaters. “He looks to the past to reinvent something modern,” explained Randi Rubin, owner of ESP Showroom, which represents the line in the U.S.

For the first time, Hartford has taken a separate booth to showcase its swimwear, which is a growing part of the business. “The brand is very casual and relaxed. It’s known for its garment-dyed and washed cotton voile shirts and linens and polos — things you would wear on the beach,” said Rubin of Hartford’s resort vibe. “It’s very popular in St. Barth’s and Saint-Tropez, where we have stores.”

The swim collection incorporates Liberty prints and vintage motifs like surfboards and Volkswagen buses. Each men’s style is also available in a boys’ size for fathers and sons to pair together. Retail prices for men’s trunks range from $150 to $200.

Key retailers for Hartford in the U.S. include Barneys New York, Saks Fifth Avenue, Scoop, Fred Segal Trend and Douglas Fir. Batik-print scarves from Hartford have been selling out this summer on Mrporter.com, added Rubin, and accessories are a growing part of the men’s business.

“I remember we were very successful with knit ties, especially Rooster brand,” recalled Tesoro of the family retail store.

Tesoro launched Ivy Prepster this summer at a handful of specialty retailers, including The Brooklyn Circus, In God We Trust, Grady Ervin & Co. in Charleston, S.C., and, of course, Tesoro’s Apparel. The collection is also carried online at ivyprepster.com.

“Silk neckties are predominantly created to pair with tailored clothing, but our knit ties are really geared towards dressing up a pair of jeans or khakis,” pointed out Tesoro.

Ivy Prepster manufactures its ties in Shanghai from 100 percent cotton. “It took us a long time to find the right vendor. We wanted to do cotton because silk knit ties often look great when laid flat but tend to lose their shape and body when actually worn. That’s why we like cotton — but we still wanted luster and texture and a luxurious hand,” explained Tesoro.

For spring, Ivy Prepster will offer about 30 styles, with an emphasis on patterns such as argyles, stripes and dots. Each tie retails for about $70.

“Knit ties are iconic, preppie staples — every sports club at an Ivy League university has its own knit tie. It’s a truly defining article of your prephood,” said Tesoro.

Tesoro himself studied electrical engineering at Rensselaer Polytechnic Institute and then earned an M.B.A. from the University of Rochester. He went on to work at a Boston-area technology firm and then to three different boutique investment banking firms on Wall Street before starting Ivy Prepster. “Our ties are a truly differentiated product from traditional neckwear,” said Tesoro.

Greg Armas first made a name for himself in Los Angeles as the founder and owner of Scout, a much-buzzed-about boutique that brought obscure European designers and vintage finds together under one roof.

Three years ago, Armas relocated to New York where he opened Assembly New York on Ludlow Street on the Lower East Side. Calling it “the continuation of the concept” that had proven successful at Scout, the New York store offers “new independent designers and vintage collections in a time line context,” Armas said.

When the store opened, the thirtysomething Oregon native, who studied fine art and curatorial studies in Los Angeles, focused exclusively on men’s wear. But last fall, Assembly New York relocated into a larger space, more than quadrupling its square footage, and allowing Armas to add women’s wear back into the mix.

Since 2009, Assembly has also produced a private label collection of men’s wear designed by Armas and wholesaled to other specialty stores around the world including Opening Ceremony, Blackbird and Stand Up Comedy in the States, along with Isetan, Harvey Nichols and other international retailers.

The collection that will be shown at ENK will be “very textile-based,” Armas said, and will draw on the asethetics that he has absorbed working with vintage clothing for the past 15 years.

The line uses natural materials and draws on the heritage of men’s wear with gabardines, linen, rayon and the newly discovered Cupro fabric used in the slim-fitting tux pants, elastic-waist trousers, flowy shirts, tanks, blazers and convertible parkas, all offered in a soft palette.

Armas said the collection was “inspired by things I hate,” like baseball and pajamas, and includes “a lot of stripes” like those that would be found on a New York Mets baseball uniform. Suits have a Seventies sensibility and look like what a sportscaster at that time might have worn, he said, “but interpreted in a modern way.”

Armas said that for fall 2012, the Assembly collection will begin offering women’s wear as well.

Clothes don’t make the man, it’s the man who makes the clothes come alive by embracing his individuality.

That is one of the keys to the philosophy of Scott James, a line of men’s wear that encourages the unique choices of today’s modern man. According to the brand’s Web site: “What it means to us is having the personal touch, making the effort, paying attention to the details. It means cultivating connoisseurship, with intelligence and creativity.”

Scott James, which was purchased last year by Hampshire Group, continues to be designed by founder Scott James Kuhlman and offers classic items rooted in Anglo-Italian tradition but at a lower price than designer labels. “We see value in offering a cool European asethestic at a more-attainable price point,” Kuhlman said.

For spring, the company is adding to its strength in tops by enhancing its offerings with softly constructed blazers that incorporate shirting fabrics, and five-pocket trousers in lightweight poplins, Kuhlman said, noting that the “pops of color” in the trousers will be a “magnet” on the selling floor. “It’s something fresh and new,” he added.

Overall, the colors of the season have been “softened” and now have a Mediterranean feel in contrast to the saturated hues of the past.

In tops, which still remain the backbone of the collection, Kulhman has designed neo-classic prints, and sweaters, which he acknowledged is “an oxymoron for spring,” are garment-dyed and printed for a vintage yet dressy feel.

Kulhman, who said the line is thriving under the auspices of Hampshire, is still focused on specialty stores but would like to sign on better department stores as well this coming season.

For 10 years, Splendid has been on a tireless search for the ultimate T-shirt. Founded by Moise Emquies in 2002, the company has searched far and wide to find the softest fabric and most color-absorbing yarns in the world to produce that T-shirt. Its formula is a blend of 50 percent Supima cotton and 50 percent micro Modal, a form of rayon that is soft and readily absorbs dyes. The shirts are available in nine basic bodies.

The success of the initial T-shirt led the company, now owned by VF Corp., to branch out into a full men’s sportswear collection, according to Jonathan Saven, president. The line of core basics, novelties and hoodies is primarily knit-focused and heavily tops-oriented, but also includes wovens, pants and jackets. “We take the classics and make them our own,” he said. “We start with novelty washes and then add finishing details — stretch is very important.”

The spring collection is inspired by a trip to Baja and features a sandy, earthy color palette with “pops of color,” Saven said.

Its tag line — “easy, classic, everyday (and a little rough around the edges)” — becomes evident in the hoodies, which use sweater bodies but in fleece fabrics and woven button-down shirts lined with jersey fabrics. “They have a familiar hand but mixing the fabrics creates a healthy tension,” he said.

Austin Sherbanenko is a lone wolf.

The 24-year-old designer and owner of Odyn Vovk, which translates into “one wolf” in Ukranian, works in a Skid Row warehouse in Los Angeles, toiling away in a small upstairs office studio. The showroom is downstairs, where he displays the collection on hand-made racks in a space filled with collectibles from his youth.

Sherbanenko’s interest in fashion dates to high school when he screen-printed his own T-shirts. That was followed by an internship in New York, where he designed his first collection. That initial collection was picked up by Barneys New York in Tokyo, H. Lorenzo and Blackbird, and is now carried in stores in the U.S., Canada, western Asia, Europe, Australia, Hong Kong and Japan.

Sherbanenko prides himself on producing pieces that are “inspired by anything that sparks my curiosity. The collection is designed without the structured direction that a hard-lined story would offer. I have a much more spontaneous approach. Ideas pop into my head and I follow the ones worth following.”

The brand was founded in 2007 and launched its first collection for spring 2009. For spring-summer, the line’s seventh collection, Sherbanenko offers up the Joker. The offerings, which have a raw edge and unconventional details, are focused around the theme of a uniform.

In battle, he said, “Each soldier is given a uniform in [which] he must learn to live, fight and die.” Although most men are not in the service, Sherbanenko said each “tends to have our own version of a uniform in some way or another, so what better pieces to outfit ourselves with than Odyn Vovk’s wearable and highly practical garments.”