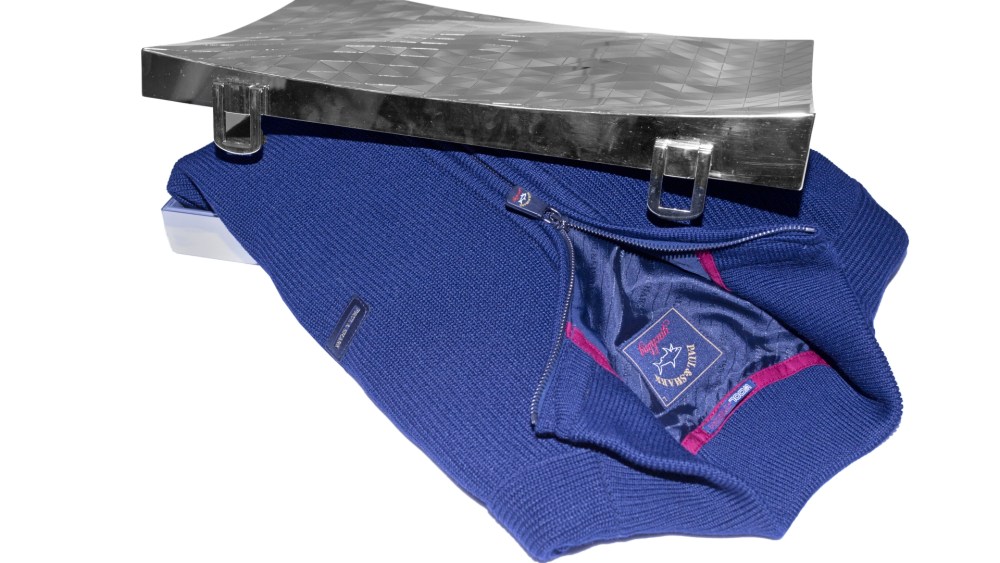 MILAN — While the name Paul & Shark might suggest otherwise, the brand is as Italian as it gets — and proudly made locally.

“My father had a genius intuition — a special packaging to bring added value to the product, which could also be seen as a gift — and was a pioneer in conceiving a lifestyle concept to support the brand,” said Andrea Dini, president and chief executive officer of Dama SpA, the Varese, Italy firm that owns the label and a member of the third generation of the family owned company.

Speaking at the brand’s tony showroom in the arty Brera district here, Dini recalled how his father, Paolo, launched the sportswear label inspired by a sailboat in Maine and christened it with his name in English and the symbol of a shark. The marine theme continues to influence the brand, from its blue water-repellent wool knits to peacoats inspired by the English Navy, but the company has evolved the collections to comprise total looks and accessories, exporting to 70 countries around the world.

Paul & Shark is marking its 40th anniversary this year. To help observe the milestone, it has collaborated with Wallpaper magazine and asked three designers to reinterpret the brand’s original packaging — a blue tin and a blue metal briefcase. In a nod to three of the company’s most relevant market areas, “Project 40” includes Zhang Zhoujie from China; studio Ladies & Gentlemen from the U.S., and Tomás Alonso from Spain, for the European region. The three items — a silver metal case with a graphic digital mesh reminiscent of the sea by Zhoujie; a tin that turns into a lamp from Ladies & Gentlemen, and a colorful triangular container made with recycled plastic recovered from the ocean from Alonso — will be produced in a limited edition of 100 pieces and sold at Paul & Shark banners worldwide and out of the brand’s New York and Milan showrooms only during 2016.

Dini said the experience working with designers from outside the fashion world, with “different design parameters and materials,” triggered a desire to further collaborate in the future with outside creative minds on collections with “a simple and understandable message.” Paul & Shark is designed by a team, and Dini said outside partnerships could be an additional “stimulus.”

Sales in 2015 were down 4 to 5 percent to between 160 and 162 million euros, or $177.6 million and $179.8 million at average exchange rates, dented by the performance of the Russian market. “We’ve never had a decrease in revenues for 27 years,” Dini said, but stressed that he did not want to go the easy route to pump up sales. “For example, we’ve never been in outlets, and I don’t intend to change this. We could have easily beefed up sales this way, but I’d rather weather this out but not change our strategy,” he said.

The executive said two “question marks” hang over China and Russia, where the company has 60 and 30 stores, respectively, but he is more optimistic about a quick recovery in China. “On Russia, I am quite negative,” he said. Exports represent 80 percent of the firm’s revenues.

The company is also expanding in countries such as Indonesia and Mozambique, as well as developing travel retail. “Airports, cruise ships, duty-free in Asia, these are all areas of growth,” said Dini. This channel accounts for 7 percent of sales, and Dini did not “see problems to its expansion.”

A boutique is expected to open in Houston in 2017, following a relocation in Florida and the opening of a store in Las Vegas last year. Citing existing units in the U.S. in locations such as Beverly Hills and Madison Avenue, Dini highlighted the “superb locations” the company has secured over the years. Similarly, he trumpeted the group’s vertically integrated production and a state-of-the-art plant with solar panels.

Asked about the challenges of manufacturing in Italy, given the high cost of labor, Dini waved the concerns away. “We’ve been producers for so long. If you are well-organized and have qualified personnel, there is no issue.”

The executive’s grandfather, Gian Ludovico Dini, in 1921 acquired a knitwear maker in Varese, which in 1957 was named Maglificio Dacò, and then Dama. Dini said that, until the launch of Paul & Shark, the plant used to produce for the likes of Balenciaga, Dior and Giorgio Armani. The company now produces 1 million outfits a year and men’s wear accounts for 80 percent of sales.

Dini cited the U.K., Spain and Germany as significant markets. “There are prospects in the U.S., Canada and Mexico, China and the Middle East,” he said.

Rachelle Giroux, president of Paul & Shark USA Inc., said the U.S. and Canada account for 15 percent of sales. “There are encouraging signs” in the region, she said, where the company is “engaging the customer to tell its story,” to convey the “value of the brand and its lifestyle.”

There are a total of 250 stores worldwide, with 20 of these directly operated. The collections are available at between 1,000 and 1,500 points of sales.

Paul & Shark is gearing up to launch its own e-store this year, while the designs are already sold online by such stores as Nordstrom, Harrods and Lane Crawford.

While a number of family owned companies have been partnering with financial partners, from Buccellati and Versace to Harmont & Blaine, Dini firmly dismissed the possibility of a public listing or admitting an investment fund into the firm. “The advantage of the family is that you can decide quickly,” he said.