The company maintains an active role with the current arts and philanthropy scene.

By Subrina Hudson on May 1, 2012
View Slideshow 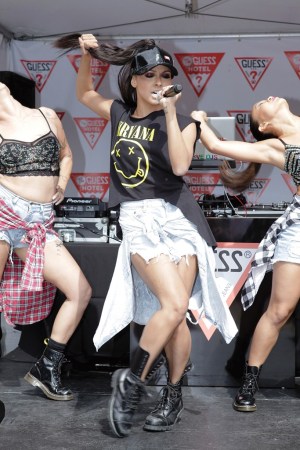 Guess’ brand-defining ads evoke a mood of vintage Hollywood glamour, but the company also maintains an active role with the current arts scene, including partnerships with ­— and an increasing presence at — events like the Toronto International Film Festival and the Coachella Valley Music and Arts Festival.

In fact, Guess’ multitasking mind-set has also gone to philanthropy. Recently, the company donated $2.5 million to the Gallatin School of Individualized Study at New York University to establish a visiting professorship for the study of fashion and fashion business.

RELATED STORY: American Dreamers: Paul and Maurice Marciano on the Strategy Ahead >>

Guess also collaborated with the Fashion Institute of Design and Merchandising in L.A. in March 2010 to launch a Guess Design Challenge at the school’s annual graduation gala. The winning student was offered a design assistant position at Guess.

Emerging young talent has been found in Ella Marciano, daughter of chief executive officer and vice chairman Paul Marciano. The 18-year-old has helped design T-shirts and bracelets for charity since she was 7. Last November, she designed a bracelet for Save The Children to aid those affected by the East African droughts.

Guess continues to look to the future even as it marks its 30th anniversary. As Paul Marciano concluded, “At the end of the day, you have to stay true to your heritage, to your roots and bring it to the digital world.”