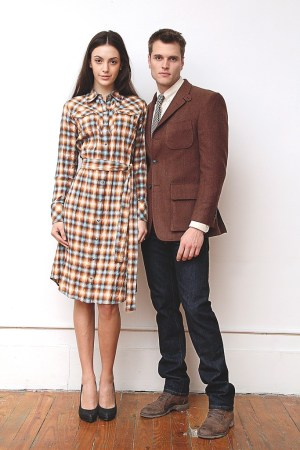 NEW YORK — In 1863, Yorkshire, England, native Thomas Kay arrived in Oregon, bringing his weaving expertise to the new state in the Northwest and ultimately laying the foundation for the company that today is Pendleton Woolen Mills.

With the 150th anniversary of that special moment in Pendleton’s history looming, the company is launching an apparel line called The Thomas Kay Collection. The men’s and women’s apparel, accessories and home collection honors the founder’s vision and craftsmanship. It also targets a new customer, one who loves classic pieces but is looking for a modern fit and more timely fabrics and details.

“We really focused on what we would consider iconic Pendleton, and that would be starting out with our mill fabric,” noted Elliot Hoshor, who serves as Pendleton’s senior men’s wear designer and is in charge of designing the Thomas Kay collection. “All of the inspiration is based around the history of the company.”

During research for the line, Hoshor turned to Pendleton’s archives, reaching everything from its fabrics to old marketing materials and catalogues.

“All of the details are either taken from an original garment that we made or something that is so original and classic that it’s a staple, like traditional notch-lapel blazers in tweed fabrics with suede elbow patches,” he noted. “There is an English story because Thomas Kay was English, and then there is the Pacific Northwest style, which Pendleton can really take ownership of. We have been selling shirts to cowboys and cowgirls for a long time.”

The new collection is full of such updated classics as blazers inspired by traditional hunting styles, wool flannel plaid shirts, alpaca cardigans and jacquard coats with Navajo touches. The women’s pieces mirror that sensibility, though slightly softened via Henley tops with jabot details, a plaid Western shirtdress, lace cardigans and a wool jacquard coat with a Northwestern Americana motif. All fabrics — including a new lightweight brown, blue and green Oregon Tweed just for Thomas Kay — are made in Pendleton’s U.S. mills.

E.K. MacColl, Pendleton’s men’s national sales manager and a member of the sixth generation founding family, noted there was more to the timing of the launch than just the milestone. Over the past few years, Pendleton also started to attract a new, younger clientele through the contemporary line called Pendleton, The Portland Collection, as well as collaborations with Opening Ceremony and Junya Watanabe/Comme des Garçons. These have prompted the company to actively develop strategies to cultivate new consumers.

“One reason was to celebrate 150 years of weaving fabric in America, and the way to do it is to honor Thomas Kay,” MacColl said. “Over the last few years, Pendleton, specifically in men’s wear, has also really seen growth from a younger male consumer who is really taking heart in something that is American heritage.

“We came up with a more fitted, tapered silhouette, and that has allowed us to get into some great young boutiques,” he added.

The Thomas Kay Collection, which is slated for a fall launch at retail, is set to participate at the Capsule trade show in New York, Project in Las Vegas and Bread & Butter in Berlin.

MacColl said the distribution strategy will mostly home in on small independent stores, as well as Pendleton stores and catalogues. For the men’s wear, wholesale prices range from $40 for a cotton oxford shirt to $146 for jackets; in women’s, prices are from about $71 for a shirtdress to $214 wholesale for a coat.

First-year wholesale sales projections are at about $2 million.

Going forward, the sense of heritage will be a key ingredient for the brand. “There are a lot of brands that claim that they’re a heritage brand, but this is the real-deal heritage brand,” Hoshor said. “It’s also a discovery brand that hasn’t really been in the mind of customers. The goal is to get every guy and girl to be familiar with it.”