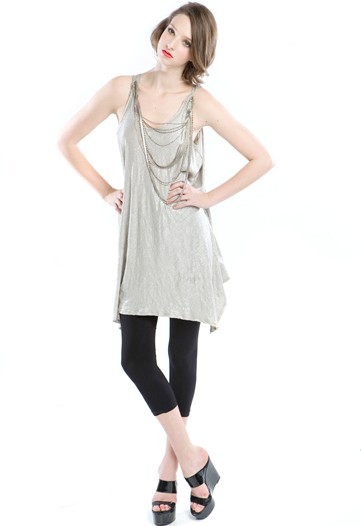 Under pressure from retailers, designers in the contemporary arena are more price-focused than ever in an effort to entice customers back into stores.

The sector was created as an alternative to high-priced designer clothing, offering product with a designer aesthetic at a lower price point. With deep reductions in consumer spending during the recession, contemporary designers are trying to offer even lower-priced product without sacrificing quality — a difficult challenge as manufacturing costs keep rising.

But these designers have found alternatives. Some have launched lower-priced capsules and others have decided to reduce their own margins in order to lower prices.

Some executives at contemporary firms, including Andrew Rosen, president and chief executive officer of Link Theory Holdings U.S., have chosen not to lower prices, but to focus on offering an even better product.

“In the cases where I feel that I need it, I’m working on closer margins,” Rosen said. “But I will never compromise the integrity of the clothes and the quality of the fabric for price. Ultimately, what I feel is the most important thing to do is to create clothes with a sense of urgency, and we achieve that by delivering clothes with integrity in design and quality, while offering value.”

Beth Bugdaycay, ceo of Rebecca Taylor, agreed. She has increased the number of items available at the opening price point, but it’s not always as simple as lowering the overall price range.

“It’s about offering designer product at a value,” she said. “Even at a lower price, the item needs to be something special. If a top is priced at $150, that doesn’t mean the customer is going to buy it only because the price is lower, it still has to make her want to separate from her money.”

Although Bugdaycay said stores are asking for more items at lower prices, the spring best-seller at the company has been one of the most expensive pieces in the collection. The top, which retails at $350, was created using about seven fabrics, including a swiss dot and crocheted lace.

“There is a lot of design in that top,” she said. “We were originally scared to offer it in the line because of the high price, but because we loved it, we took the chance and absolutely refused to find ways to make it less expensive. Obviously, we couldn’t be happier with the result.”

Stacey Bendet, designer and owner of Alice + Olivia, said she has been pushing her fabric suppliers and factories to offer better deals. She said she has had to take lower margins to stay competitive and well-priced.

“I’ve sort of looked at it as a design challenge,” she said. “I won’t make anything that I feel looks cheaper just to make their price requests, so my goal as a designer and owner is to get better fabric and material costs without sacrificing quality and the aesthetic of the line.”

For spring, Bendet launched an assortment of T-shirts and tanks she calls the 9T for Alice + Olivia collection. These embellished Ts are “the answer to stores wanting items at lower price points,” she said. Each top is made to retail for less than $200. Bendet said she plans to continue to expand the line by offering cashmere and wool styles for fall.

At Milly, where sophisticated prints and intricate embellishments have become part of the company’s signature, Andrew Oshrin, president and ceo, said it has been difficult to lower prices. He said the overall price range for fall has come down about 15 percent by layering on more pieces at lower prices.

“It is a difficult problem as a U.S. manufacturer because we feel that we already pay our factories a fair price and that negotiating with them further could be counterproductive,” Oshrin said. “We have benefited from a stronger dollar compared to last year, as most of our materials come from Europe, but greater price sensitivity has fostered the need to look at other sources of fabrics and prints.”

Like his competitors, Oshrin said quality would not be sacrificed.

“We are offering more price diversity within each collection and hope to continually improve upon that as the need for lower prices may remain with us for a while,” he said. “We have offered entry-level price tops for fall and Michelle [Smith, Milly’s designer] presented fewer embellished items, which tend to be more expensive. In the short run, we may have to work on lower margins of profitability, but also try to work to develop key items where we can drive selling and margin.”

Bensoni owners and designers Sonia Voon and Benjamin Channing Clyburn said they always have been price-conscious with their line, which wholesales between $100 and $600.

“The economy has made us better designers,” Voon said. “We are more focused now on how to make an even better collection at an even better price point.”

To keep overhead costs down, the brand has moved sales in-house and consolidated all production into one facility in China. Voon said they have begun to experiment with new fabrics — looking at lower-priced silks and new textile firms to negotiate with. So far, the plan has worked. Barneys New York picked up Bensoni’s fall collection for the first time, and Nordstrom bought heavily into the line.

“Retailers are struggling and we have seen it become harder for customers to purchase those more expensive items,” Clyburn said. “We are working to make sure we price aggressively while keeping healthy margins. It’s certainly been a challenge.”

Shadi Askari, co-owner and co-designer of the Los Angeles-based T-bags, is trying not to lower her prices overall, but rather offer her best stores discounts.

“We are already priced pretty low, $70 to $120 at wholesale, so I won’t go cheaper because for us, that will mean sacrificing the quality,” she said. “What we have done is offer more embellishments on some of our items but we have not changed the prices so we are giving them more for their money.”

Los Angeles-based contemporary designer Trina Turk said designers should stick to their guns and remind retailers about what makes their collections special.

“It’s dangerous for us to cut for price reasons,” she said. “We don’t want to change our place in the market by changing the way we make our clothes. While it is tough out there right now, we have to keep reminding ourselves that this, too, shall pass.”