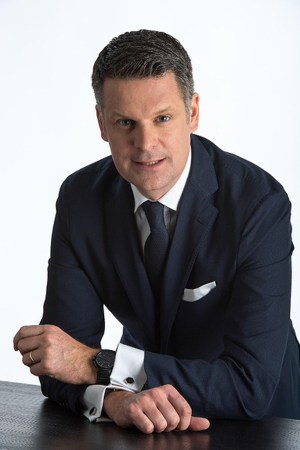 NEW YORK — On the march to try to double its $221.5 million business over the next five years, international bridal retailer and wholesaler Pronovias plans to double the number of stores it has from 163 over that time period.

During an interview Tuesday at the company’s seven-story East 52nd Street store, Pronovias chief executive officer Manuel Ehrensperger, who joined the company in July, discussed the brand’s strategy. Founded in Barcelona as a family business, the Pronovias Fashion Group now includes four retail labels and five wholesale ones. Brand ambassador Petra Nemcova was due to host a runway show for the Atelier Pronovias line at St. James Church here on Tuesday night, followed by an after party at the store.

With distribution in more than 90 countries, Ehrensperger said Asia has great potential for Pronovias due largely to the fact that more women are choosing to buy wedding gowns instead of renting them, as has been the norm. India, where weddings can be weeklong celebrations requiring multiple gowns for a bride, is another underserved region, he said. The U.S. market is another area where Pronovias aims to have greater traction, and Ehrensperger said Spain, which accounts for 24 percent of the total volume, is seeing stronger sales now that the economy is showing signs of improvement.

Airy and light with more slim-fitting silhouettes, the collection, which arrived in stores last month, retails from $3,000 to $8,000, which is considerably less than Pronovias’ Elie by Elie Saab collection, which is in the $4,000 to $15,000 range. Throughout the world, the Pronovias label is a top performer, with retail prices in the $1,000 to $2,500 range.

The company’s newest store openings are in Santo Domingo, Dominican Republic, and Isla Margarita, Venezuela, with a third location set to bow in Jeddah’s Red Sea Mall in Saudi Arabia this month. Having joined Pronovias from Swarovski, the Swiss-born Ehrensperger said Pronovias customers want quality and service from any luxury product they buy. Noting that nearly all Pronovias shoppers first visit the company’s Web site before making an appointment at a store, he said the company has a sense for what that shopper is after before she tried on any dresses. The average visitor spends 20 minutes on the site and 1.2 million visitors use the site on average each month.

With 800 employees worldwide, Pronovias plans to celebrate its 50th anniversary next year with a fashion show for 2,000 at a yet-to-be-disclosed location in Barcelona. “A wedding is the most important moment of a couple’s life. Our dresses should really fulfill a bride’s expectations. It should be like a dream,” he said.