The company invited 1,800 specialty retailers to its hometown last week for a preview of its 2012 bridal collections. 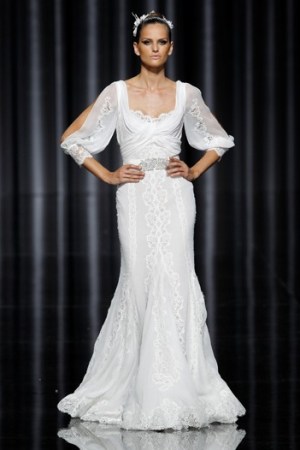 BARCELONA — Pronovias invited 1,800 specialty retailers, mainly established customers from the multinational’s vast global network and 100 more than in 2010, to its hometown last week for a preview of its 2012 bridal collections. Buyers came from 80 countries, including the U.S. (about 50) and Canada (10).

The company’s annual presentation kicked off with a nighttime runway show in the Catalan National Art Museum’s Oval Room. Featuring 82 styles by creative director Manuel Mota, dresses ranged from body-conscious and fit-and-flare silhouettes to bling-trimmed Empire styles and full-skirted gowns in fine lace treatments and embroidered tulle with lots of sparkle, jeweled belts and trims, feathers, shorter waltz-length veils, the suggestion of a cover-up and, in a nod to the British royal wedding, sleeves.

Worldwide turnover for the bridal group inched up 5 to 6 percent last year, said president Alberto Palatchi, who added, “The last few years have not been phenomenal for bridal.”

But that is about to change, he said, with accelerated retail growth that could increase the customer base by 50 percent and more than double sales by 2014.

“We’re planning to open 80 shops per year for a total of 240 in countries where we have no prior retail presence, and they are huge markets,” said Palatchi.

He ticked off the geographical lineup that includes Brazil and Mexico (three stores each), Chile and Venezuela (one each), South Africa (two), Jordan, Lebanon (10), Korea, Russia and Romania (two each) and Poland. “We’re ready for take-off,” Palatchi exclaimed.

As for Pronovias’ wholesale operation, “it’s growing as we speak,” according to manager Juan Brendle, who said Pronovias sells to roughly 4,500 independents. “We’re growing all emerging markets,” with Brazil, Russia, China and the U.S. key targets. “We see and feel the economic recovery; it’s not 100 percent yet, but consumers are less uncertain,” he said.

The following day, buyers placed orders at Barcelona’s Palau de Congressos, where 216 bridal gowns, including 15 styles by Elie Saab, the only outsider line in Pronovias’ stable, and Mota’s Fiesta line of cocktail and mother-of-the-bride styles were on display. Retailers reported buying across the board and in similar quantities to last year.

“We do very well with Pronovias; every year they manage to surprise me and their prices are accessible,” explained Kathy Medak, owner of A Princess Bride couture bridal salon in Bothell’s Country Village, outside Seattle. “I’m buying a little bit of everything, including strapless and sweetheart necklines, lace, tulle, long-waisted styles and feathers.  Sleeves are definitely important with a flattering neckline and Kate’s [Middleton’s] dress will bring back ballgowns,” she predicted.

On the other hand, the charmeuses and shapely silhouettes are more for destination weddings and “not for our girls,” she concluded.

“You always leave here totally satisfied,” said Lynn Harlow, owner of Promises and Lace, in Burlington, Ontario. “Manuel Mota has covered the market.  The lines are clean, classic and you get what you pay for. The price range reflects the quality and workmanship. I’ll be picking up a sampling of everything including lace dresses, which are very important — and I think customers will go for a lace sleeve or detachable jacket — and the Fiesta line. Every year we end up buying a little bit more,” she conceded.

“Our girls want puffy skirts, fit-and-flare, trumpets, open backs and bling is very popular,” said Marsha French, owner of Stardust, a three-door bridal operation headquartered in Plano, Tex. In general, brides are shopping for less expensive gowns. “Four- to five-thousand-dollar dresses are normally an easy sell, but currently girls are asking for $2,000 gowns, so I’m picking up similar units but at cheaper price points,” she added.

“Our U.S. business is holding up nicely. We’re very optimistic about the market; we expect to remain a leader there,” commented Keith Lurie, Pronovias national sales manager for the U.S. and Canada. In addition, the U.S. is Pronovias’ number-one target for a digital campaign due to launch in September.  “We expect substantial impact — emphasize substantial — on consumer brand demand and dealer reorder and sell-through performance,” he said.

Pronovias closed Barcelona Bridal Week, a four-day event that ran May 10 to 13, featuring 22 runway shows with Catalan designer Rosa Clará. Her brand rolled out its first U.S. location, on Miami’s Miracle Mile, earlier this year and a Dallas unit will open in September, a spokesman confirmed.