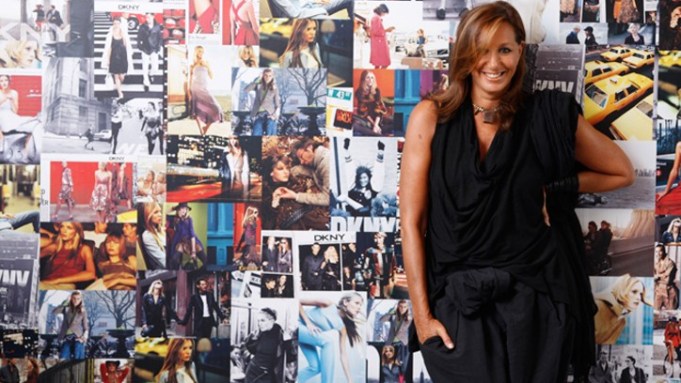 DKNY is feting its 20th anniversary at the Bryant Park tents on Sunday, but Donna Karan has little time to get lost in nostalgia.

The brand has been going through a growth spurt, adding doors and pushing into such markets as Asia, the Middle East and Europe. In addition, DKNY just unveiled its newest venture — DKNYC, a better-priced line of cool urban looks.

With Mark Weber, chief executive officer of LVMH Inc., U.S., and chairman and ceo of Donna Karan International, and DKNY president Mary Wang in charge, DKNY has also recently been updating some existing licenses and adding several new ones.

All of this isn’t to say Karan has lost sight of DKNY’s core inspiration — the streets of New York City. These days, the designer admits she finds her inspirations at such haunts as The Box. “That’s where I get my rocks off on,” she said.

In advance of the anniversary show, WWD caught up with Karan and Jane Chung, executive vice president of design at DKNY, to talk about the brand’s past, present and future.

WWD: How do you feel about the 20th anniversary?
Donna Karan [laughs]: Next to Calvin, which is 40, I feel like a child. To me, DKNY is a baby to the size of New York City. It’s all relative. When I think of DKNY and of New York, if we made any contribution, it’s celebrating New York City, which, I think, celebrates the world. The name itself carries the energy.

WWD: How did you come up with the name?
D.K.: It goes back to Donna Karan. I didn’t feel confident that I wanted my name to be a brand. But I had a shoe box that said “Maud Frizon Paris and London.” I thought, “Oh, what about Donna Karan New York.” I called Peter Arnell, and said, “What do you think about Donna Karan New York, as opposed to just Donna Karan?” He said, “Well, nobody will buy it in L.A.” I said, “No, Peter, don’t you understand? New York is the world, the bridge between the U.S. and Europe.”

WWD: Let’s go back to 1988. What inspired you to launch DKNY?
D.K.: Donna Karan was developed as a company for me and my friends only. I had done Anne Klein, I did Anne Klein II. With Donna Karan, I wanted to address a few simple black easy pieces for me and my friends. Then, my daughter [Gabby] got into my closet and she and her friends started to wear it. It would go from the runway to school, and I thought, “There is something wrong with that picture.” DKNY truly was started as a jeans concept, but we didn’t want to do just women’s. The whole point was that it was about the family. It was about men’s as much it was about women’s.

WWD: Were you at all scared that DKNY would have an impact on Collection?
D.K.: Never.
Jane Chung: It was the other personality.
D.K.: Jane wanted to do this.
J.C. [laughing]: I didn’t want to do this, that’s not true.
D.K.: Jane had this idea and she went off and pulled it all together, and then I was finished and DKNY was born. The beauty was that we were such a close family. Jane was an extension of my family.
J.C.: I worked with Donna on Collection and had great fun, but at the same time I thought Collection was very pulled together. And I am a jeans girl, and I like the mix of the two and that part was missing in Collection — the T-shirts, the jeans. That’s probably why I don’t think it ever was a concern that it would [take] from the Collection business. It was more of an enhancement, completing the Collection rather than a secondary collection.

WWD: What was DKNY about?
D.K.: The first looks had a navy blue blazer, the white shirt, the jeans, the trenchcoat, the utility suit — the seven easy pieces of DKNY. It was all those basic, core elements we wanted to have in the lifestyle outside of the working woman of Donna Karan. Where was her other life? That was DKNY. It was the boyfriend jacket to wear with the jeans. It wasn’t her working woman’s wardrobe. In the first show, we had kids, we had guys, it was life.

WWD: Since then, how has the line evolved?
D.K.: Like everything, the seed is planted and then it grows. You can’t control the growth. We experienced all parts of the city. How does a woman dress on Wall Street? How does she dress downtown? How does she dress uptown? Collection was the limousine, DKNY was the subway.
J.C.: Now she has moved up to a taxi and maybe a car service. [DKNY] Jeans is definitely more subway now.

WWD: What is the most iconic DKNY visual?
J.C.: I think [model] Beri Smithers in the rain is the most iconic. She has the slipdress that’s sexy and the men’s coat. It’s that feminine-masculine thing we always talk about. I think it’s a little twist on classic, denim and suits. Also color.
D.K.: The unexpected. We always say the taxicab yellow, the neon lights of the city. It’s always inspired by the city in some way, shape or form.

WWD: What is your favorite part of designing DKNY?
D.K.: From my point of view, it’s like being the mother. It’s like watching your children. I always get inspired here. I see the family, the whole essence of fashion.
J.C.: I think she has fun here. We don’t take ourselves too seriously.

WWD: Looking back, what were some of the highlights?
D.K.: There are so many — my grandchild and my husband, Stephan, on the runway. I love dogs, and I loved when I had dogs come down the runway. I said, “I want to make sure the family is involved.” It’s time to have fun. I loved the paper dresses, the neoprene dresses.
J.C.: I like to see everyday things in a different light, like neoprene or jersey.
D.K.: And I think the opening of the DKNY store was definitely one. Bond Street was a hoot. DKNY hit London before it hit New York. Ralph [Lauren] was telling me the other day that he gets his lunch at DKNY [on Madison Avenue] because he is right across the street. He said, “You’ve really got good food there.” It was such a compliment. I always wanted DKNY the cafe to be on the street, like a Bar Pitti or a Pastis.
WWD: What is the potential?
D.K.: I still think DKNY is about color and in the beauty division it doesn’t have the lipstick and the nail polishes. I still want to address all members of the family and really do home. I see DKNY as a place where people gather, and making a difference with New York City — to get behind the educational system in New York, the talent of New York. There is so much that New York reflects. It’s a constant opportunity for growth.
J.C.: It’s really beyond clothes. It’s so much more global now. You can take the whole concept everywhere.

WWD: Describe your first encounter with Jane.
D.K.: I was Jane’s critic at Parsons School of Design. She worked for me at Anne Klein, and then, brilliantly, left, and went to Europe. I lost a brilliant designer at Anne Klein, but I was able to get one at Donna Karan [since the noncompete clause didn’t apply to Chung].
J.C.: She called me after I was in Italy and asked, “Do you miss home?” And I said, “No.” But it was a once-in-a-lifetime opportunity. I think I have made the right choice.

WWD: What makes this collaboration so unique?
D.K.: If you ask the same question and we are in two different parts of the world, you get the exact same answer. Jane knows exactly what I will say.
J.C.: But then some things are completely the opposite, which makes it interesting.
D.K.: It’s the East, it’s the West.
J.C.: You’re the more East, I’m the more West.
D.K.: She always inspires me. I am constantly overwhelmed by her vision. She is shoe- and bag-obsessed. To this day, I say, “Why don’t you come to the mothership again.”

WWD: Jane, do you have any anecdotes about Donna?
J.C.: She is predictably unpredictably predictable. She never says “Pull back.” She says, “Go for it.”

WWD: Do you have any surprises planned for the show? Do you plan to reprise some of the classic DKNY moments?
D.K.: We will be looking at the next 20.
J.C.: Hopefully it’s a bit of both. Hopefully it’s about the New York street.

WWD: What would you still like to do with DKNY?
D.K.: The store concept isn’t quite there yet. It was when we opened, but I think the cookie-cutter approach doesn’t work anymore. There should be no differentiation between you and the street. When I was very young, it was the feeling I got at Bloomingdale’s. I used to go to Bloomingdale’s not just to shop but for the experience. It was a place to be, and, oh, there were also clothes. It’s so much about energy. I see DKNY like Freemans [the restaurant on Freemans Alley]. It’s historical New York. You go off the beaten path. You have the alley, so you have both indoor and outdoor. It feels like the streets of New York.