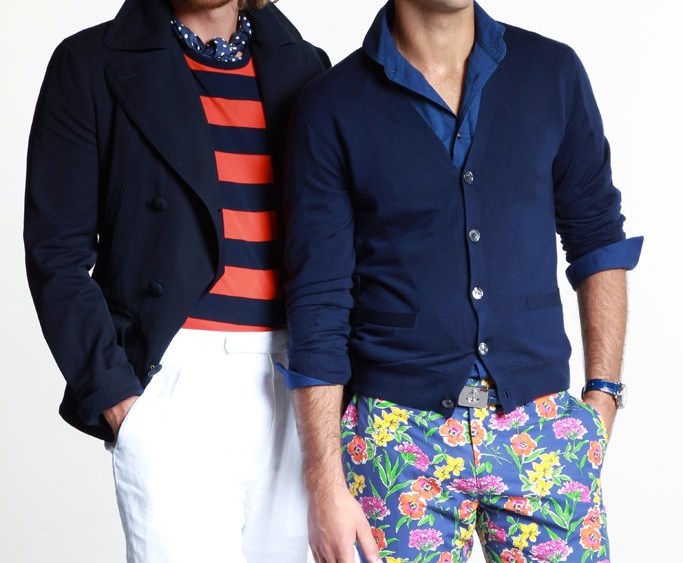 During a presentation of his spring men’s collection Tuesday, the designer revealed that he is considering opening freestanding Ralph Lauren Purple Label, Black Label, Polo and even accessories stores.

“Absolutely,” Lauren responded when asked if he would open a separate Purple Label store. “All of our brands are really strong and there’s a chance for exclusivity.”

The presentation in the company’s Madison Avenue offices underscored that point by showcasing a clear delineation between each of the company’s labels.

Saying that each brand represents its own “world,” Lauren said, “We design them as if they were each a different company. Other brands have one statement and one world and, yes, that’s simpler, but one voice doesn’t work. There’s a slimness and a sleekness that works throughout [all our brands], but we keep each label clear.”

In the world of Purple Label, Lauren this season expanded the assortment of sportswear. “We’re building on our Purple Label brand,” he said. “So we have a lot more very high quality, very sophisticated sportswear.” He characterized the offering as “very classical” with a “timeless elegance.”

Luxe fabrics in sweaters and pants — from thick cashmere to fine wools — and a explosion of color were evident throughout the offering. One example was an eye-catching bright orange bonded cotton coat with a patterned silk lining.

“As we move around the world and build more of an international luxury business, people are asking for more sportswear,” he continued, citing Hong Kong, China and Europe as spots that “really appreciate Purple Label” and its distinctive look. “It’s superluxurious and elegant,” he said.

The Purple Label clothing has become more fashionable, Lauren said, with a slimmer silhouette and shorter jackets. “The young guy is asking for Purple Label,” he said. Models include single- and double-breasted jackets, as well as a bevy of vests. Furnishings are simple and understated and designed to complement the suits, with injections of two-tone shoes to add a fun element.

In Black Label, Lauren introduced a new suit model, which is “superslim and slightly shorter.” He also offered vests here for the first time. “We’ve always loved waistcoats,” he said, adding with a laugh: “We can’t put slim skirts on guys, so we do vests.”

The Black Label furnishings were also slim and sophisticated with a variety of colorful options that added pop but were “not flamboyant.”

The sportswear for this label used brown as the color statement of the season. “Black has always been a big statement in Black Label,” he said, “but we asked, ‘Where do we go next?’ Brown works if you do it right. It doesn’t look dull or wintry. It can still be hip and sexy.”

In the designer’s flagship Polo brand, Lauren said the spring offering represented the “new and larger voice of Polo.” The suits sported natural shoulders, slim lapels and complementary furnishings and accessories such as shirts with pin or round collars. “It’s the most classical but young at the same time,” he said, noting that the company has “nurtured” the brand for over 40 years. Fabric options included seersucker, linen, madras and silk and wool blends. “There’s a lot of heritage here, but it’s new, too,” he said.

For the first time, the company is blending its performance-based RLX offering into the Polo offering. “This is a new mix and how our stores are going to look,” Lauren said, noting that the Polo customer, who tends to be inclined toward “rustic, rugged stuff,” incorporates pieces from RLX to complete his wardrobe.

“This is the way we’re going to build our stores,” Lauren said. “If we were to open a freestanding Polo store on Fifth Avenue or in Paris, we would like it to look like this.”

The Double RL offering continued to focus on the customer seeking “vintage, antique” looks, with suits with wide lapels and sportswear that was vintage-inspired. Black Label Denim was beaten up this season with washed jeans, sweaters and jackets dominating the assortment, although here, too, there were injections of color. “This is the roughwear part of Black Label,” he said. “It’s been very successful for us. It’s sexy and cool and very international. What we have is not an American thing. We’re all over the world now.”

The company’s accessories offering also stepped out of the box this season, offering an array of colorful bags and small leather goods ranging from orange and red to green and blue. “Men’s accessories is a tremendously growing business for us,” he said.

Each label had a comprehensive collection and there was even a new range of carbon fiber accessories for spring in products ranging from briefcases to wallets. “Everything we do is inspired by cars and automotive,” he said, pointing to a bag with quilting that resembled the quilting seen on a car seat.

Lauren said the vast assortment offered under the company’s umbrella is designed to address the totality of a customer’s needs. “The whole idea is that after someone shops in our stores, they have no money left and they’re too tired to go anywhere else,” he said with a chuckle.