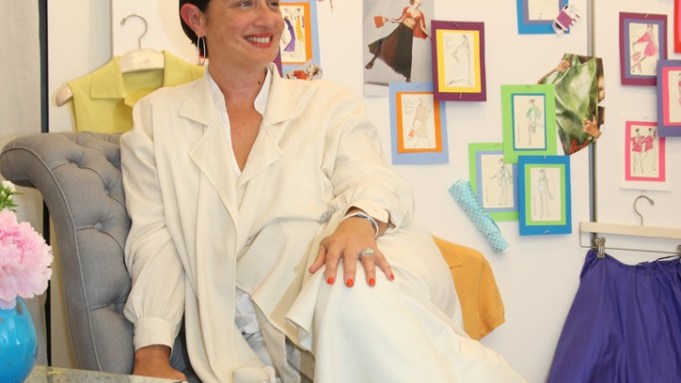 NEW YORK — Rebecca Moses is returning to fashion under her own name with a new partner and a new retail tier. Moses, known as a queen of cashmere and other luxurious fabrics, and LF USA, a subsidiary of Hong Kong-based Li & Fung Ltd., have entered a licensing agreement to create and distribute an apparel collection under the Rebecca Moses Heart Soul Style brand.

The clothing line, slated to launch at retail next February, will be positioned at a better price point, and housed under LF USA’s Oxford Collections division.

This is the second agreement between Moses and Li & Fung. Last January, she inked a license with Li & Fung’s Homestead division for the home category, and the Rebecca Moses Heart Soul Style home line, featuring such classifications as stemware and dishes, launched at Macy’s in April.

Moses was keen to reenter fashion under her own name at a more accessible price point, sensing a growing gap between designer luxury and fast fashion in the market.

“There is a whole new customer landscape,” the designer said, sitting in the Li & Fung offices on Broadway. “It’s a big step for me to put my name on a brand and bring it back to the consumer in a new way. Fashion is a reflection of the times, and our times have changed.”

Moses, based outside of Milan in Italy’s Piedmont region, recalled recently thumbing through a stack of magazines, and being completely taken aback by astronomic designer price points and how immune people seem to have become to them.

“We have totally lost our minds,” Moses said with a sigh. “I have always designed an exclusive product, but the customer I left in 2004 is a very different woman now, at least in financial standing. I thought, ‘How can I deliver fashion in a significant way?’ I like to be stylishly correct.

“I don’t want to do cheap clothes; I want to design smart clothes,” she added. “The consumer is up for grabs. There is no brand loyalty. She shops the high end and the low end.”

Moses is a familiar face in New York and European fashion circles. A native of North Bergen, N.J., she launched her namesake line fresh out of the Fashion Institute of Technology in 1981, then shuttered it in 1991, and moved to Italy to replace Gianni Versace as the designer of Genny. She relaunched her line in Italy in 1996, but closed it in 2004. Since then, Moses has worked with a slew of brands, including a stint as the creative director of Saks Fifth Avenue’s “Wild About Cashmere” promotion in 2005, and most recently, as design consultant at the Italian label Bilancioni. Moses decided to end her role at Bilancioni to focus on this new venture.

“Rebecca first began working with our company with the [home] launch at Macy’s,” said Mark Wolk, president of Oxford Collections. “Since then, she and I had a chance to talk about the next step for [Rebecca Moses Heart Soul Style].”

Wolk noted that in the past few years, the industry has paid a lot of attention to emerging designers, and while he lauded the move, which largely benefitted the contemporary arena, he found there was a space for a more mature customer looking for elegant separates.

Moses, both as a designer and a customer, fit the bill.

“We see this as a brand new opportunity for women who want clothes that are glamorous,” Wolk noted, adding the affordable and accessible aspect to the collection is key to the partnership.

Moses and LF USA are developing and launching the brand, which Moses will oversee from her Italian home base outside of Milan. Fittings and other technical support will take place in New York. Li & Fung’s extensive sourcing and distribution resources, including a network of 70 offices in 40 countries, is expected to ensure competitive pricing.

The line, which will feature primarily natural fabrics such as cotton and silks, will wholesale from about $22 to $60.

“There is a consumer out there who is thinking hard about her purchases,” Wolk noted. “This collection will feature items that are versatile and democratic.”

The new line is slated to launch to the trade in August, with distribution to major U.S. department stores next February. Moses described the new collection, which is launching with 50 styles, as “casual glamour.”

LF USA intends to add handbags and other accessories under the Heart Soul Style brand. Moses is also developing a multidimensional fragrance project with International Flavors & Fragrances Inc., which will encompass both the personal and home areas under the new brand, and is working on a book on her style philosophy.

Wolk said the company projects $100 million in retail volume for the first year. As for the name, Moses believes it says much about the stamina and conviction one needs to meet the challenges of surviving in the fashion business. “You need the heart, soul and style to meet the challenges,” she said.