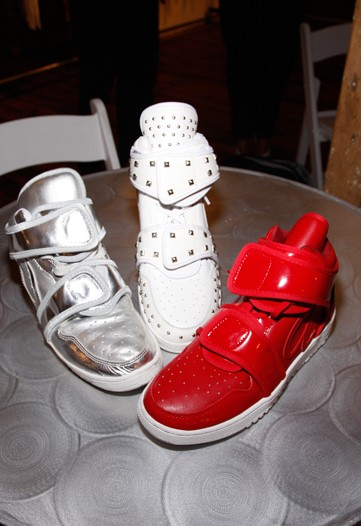 A little more than 60 emerging designer and contemporary brands showed at the second New York edition of the Rendez-Vous trade show, staged at La Venue from Sept. 18 to 21.

“We try to straddle the end of New York Fashion Week and the beginning of trade show week in order to get buyers and press from both,” explained Joshua Safalow, a partner in Rendez-Vous who oversees the U.S. edition of the Paris-based trade show.

Women’s brands represented the bulk of vendors, as the show is at the tail end of the men’s buying calendar for spring — which started all the way back in June — but there were still a fair number of men’s companies represented, looking to win last-minute spring orders or fill-in orders for fall and holiday.

“A lot of independent stores have been very careful and conservative with their orders, and now they are trying to get more merchandise for this fall,” said Eunice Lee, owner and designer of the Unis men’s label, which was showcasing slim-fit khakis, unstructured twill blazers and seersucker shorts.

Because she operates her own retail store and e-commerce site, which launched earlier this month, Lee benefits from a cushion of inventory that she also can wholesale to retail clients late in the season. “They’re trying to steal from my store stock, but there’s only so much we can do for them,” she noted. “We didn’t want to be stuck with inventory ourselves, so we don’t have a lot of extra product.”

Canadian label Obakki, whose aesthetic ethos is “rustic luxury,” was still taking spring orders for pieces such as a raw-edge cardigan, quilted motorcycle jacket and military-inspired parka with a button-out, waffle-knit cardigan liner. The company benefits from owning and operating its own manufacturing facility in Vancouver, which gives it more leeway in its production schedule.

Obakki was showcasing a capsule collection that will benefit the new Obakki Foundation, which was conceived by company founder Treana Peake and which will initially benefit three orphanages in Cameroon. Unlike many other charitable tie-ins involving the sale of merchandise, 100 percent of the sales of the T-shirts, scarves and a tote bag go toward the intended recipients. Peake and her husband, Ryan Peake, lead guitarist of the rock band Nickelback, personally fund all the administrative expenses of the foundation.

Another men’s label at the show with a bent toward social justice was Apolis Activism. Founded in Santa Barbara, Calif., by three brothers — Raan, Shea and Stenn Parton — the company works with small suppliers in underdeveloped nations to create fashion items that appeal to style-conscious consumers, thus bringing jobs, rather than just charity, to those areas. For holiday and spring, Apolis Activism featured a handsome zippered tote bag that uses fabrics from Uganda, and a cashmere sweater produced by a women’s cooperative in Nepal, designed in collaboration with British cycling brand Rapha.

On the denim front, skinny jeans continued to sell well at April 77, including selvage styles with stretch. “That’s an innovation,” noted Audrey Gingras, owner of New York’s Archetype Showroom, which sells the line in the U.S. “They haven’t been able to make selvage with stretch before, and girls always want stretch.”

Gingras was one vendor who noted her men’s selling season closed in mid-September, so she was more focused on her women’s business at Rendez-Vous, which included pretty dresses, vests and jackets covered in silk florets from Quail.

While all the brands at Rendez-Vous tended to be directional, there were particularly eye-catching sneakers from Japanese designer Ato Matsumoto that popped amidst the racks of nearby clothes. The chunky designs in high-gloss leather featured oversize Velcro straps and rows of studs. The $500 sneakers have been worn by the likes of Kanye West and are sold in luxury retailers such as H Lorenzo, Selfridges and Joyce in Hong Kong.

The Rendez-Vous show is owned and operated by Paris-based Surface to Air, a creative cooperative that sells its own fashion line, among other endeavors. For spring, a highlight of the label was its dress shirts with creative flourishes such as chest pockets with selvage trim, contrasting seersucker plackets on Oxford shirts and slender, double collars.