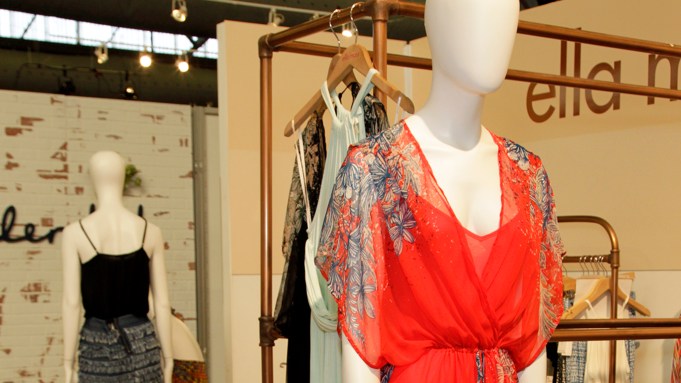 Retailers were shopping for merchandise for immediate delivery at Intermezzo, the three-day show, which ends Tuesday at Pier 94 in Manhattan.

Grace Guido, owner of Ambience, a women’s specialty store in Edgewater, N.J., as well as shopambience.com, said she was shopping the show looking for summer merchandise. “I’m all bought up for spring. I’m eyeballing things,” said Guido. “If I can pick up something that’s necessary, I’m not just picking up things to pick up. Those days are over. Retail is not what it used to be,” she said. For Christmas, she said, when it was slow at the store, the Internet business was good, and vice versa.

Emily Helfrich, owner of Cinnamon Boutique, a 1,300-square-foot women’s store in Chicago, said she was looking for spring and summer merchandise, and some pre-fall. She was seeing a lot of rompers, fringe and bohemian looks at the show.

“I think it’s a lot more relaxed and smaller than Coterie [which occurs next month],” said Helfrich, who was shopping with her friend, Jodi Hughes, owner of Crush Boutique, a 2,000-square foot store that features women’s, men’s, boys and girls apparel, also in Chicago. She liked the timing of Intermezzo because it coincided with the Children’s Club kids’ show at Pier 92.

Vendors said they were pleased with the pace of business. Nanette Lepore Play was being introduced for Feb. 15 delivery. The line, licensed to Rousso Apparel, included leggings, active dresses, cropped tanks, printed capris, skorts, hoodies and packaged Windbreakers. The collection wholesales from $28 to $44. “The reaction has been very good,” said Sana Bokhari, account executive.

John Eshaya, owner of Jet by John Eshaya said Intermezzo was “super busy” for his line, and he was doing well with printed pants and striped T-shirts for March and April deliveries. The company opened a new store in September at The Village at Westfield Topanga Plaza in Woodland Hills, Calif. and now they have two stores in Los Angeles and three in Tokyo.

Daniele Chemla, owner of Avenue Montaigne, also said that “business has been going pretty well,” at the show. She said the wide-leg pant was selling well, in addition to her linen washed styles. She was doing a lot of business for immediate delivery. Another strong seller was double crepe pants, both in long and cropped styles.

Bailey44 was also having a very busy show. The company launched collections for June and July deliveries “which are being very well received,” said Melissa Dench, senior vice president of sales. “It’s really retailing at the specialty store level and the department store business has been very good,” said Dench. She said Sunday, they were “consistently busy,” and a lot of customers came in. “The occasion dress line continues to grow and we’ve adopted new types of stores, such as Bhldn [Urban Outfitters’ retail concept].”

Jaime Norton, partner in Peace of Cloth, said she had a great day on Sunday. “We booked a lot of immediates for January and February,” she said. She said a plaid houndstooth group was also doing well for May 30th and June 30th delivery, as well as a “no-pattern pattern” updated track pant and cropped cuff pant that women can wear in the spring with a sandal. “We’ve seen new accounts and opportunities for private label,” she said. She noted that most of the retailers she saw came from the Northeast, since next week is the L.A. market. She plans to open her fall collection at Coterie next month. Since they have an in-stock position, she said they booked lots of January business at the show and “can ship by tomorrow.”