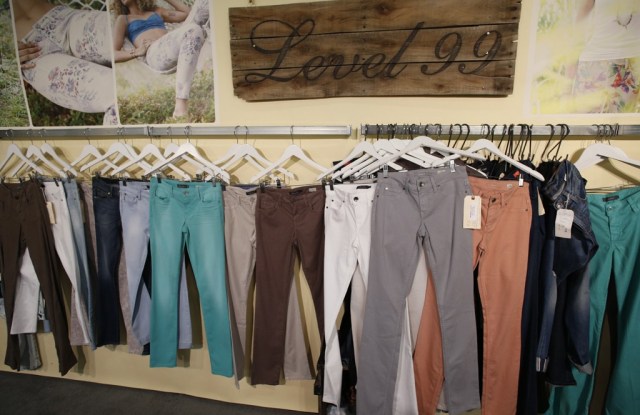 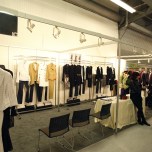 After a challenging Christmas, stores were seeking fill-ins and spring merchandise at Intermezzo, which ran Sunday through Tuesday at Piers 92 and 94 in Manhattan.

While traffic wasn’t robust, stores were busy writing orders for immediate deliveries. Among some of the key trends on display:

• Mixed media in tops, such as color splicing; mixtures of fabrics; cottons with leather trims, and lots of lace.

“People are spending money but they’re cautious and very price-conscious,” said Susan Greenstadt, who runs Susan Greenstadt & Associates, a multiline showroom. She said  consumers’ buying habits have changed so drastically, you never know what will hit it. “It’s become more of a necessity [for stores] to fill in,” she said. She was doing well with a line called Three Olives, which wholesales from $24 to $36. The tops, made in China and Vietnam, have lots of detail and can be dressed up. Another line she represents, Crème Fraîche, which is made in India, opened several accounts at the show for spring and summer merchandise. Among the accounts that purchased the line were Obligato in East Hampton and Urban Grace in Princeton, N.J., said Akshaya Parker, owner of Crème Fraîche.

Lori Friedman, owner of Great Stuff, a five-unit women’s contemporary boutique throughout Westchester and Connecticut, found some things for summer. Among the lines she purchased were CP Shades shirts, tunics and dresses to wear over swimwear, in neutral tones, and Issa dresses. “The dresses were beautiful. It was the nicest thing I saw there,” said Friedman. She said the dresses were sexy and fitted, “but at the same time, they’re modest.” One of them was a silk piece that tied in the front, which is perfect for August selling, she said. Other lines she bought were Vince, Jet by John Eshaya’s graphic T-shirts and Bobi T-shirts. “The prices are so good. I bought a little tank [from Bobi] that retails for $24 in cotton,” she added.

Gary Goldstein, owner of Lonnys, which has five stores on Long Island, said: “I love Minnie Rose. It’s so consistent. There are great colors and bodies and it’s salable.” He was also buying Bailey 44. “They have great going-out tops to wear with jeans or leggings, and great dresses. The leather trim items are sexy,” he added.

Jocelyne Kauff, owner of Adele Kauff, a boutique in Great Neck, N.Y., said she was shopping Intermezzo to add to what they already have purchased for spring, and to look at some fall. She said her customer is a very independent, professional woman. “We like to carry exclusives,” she said. Among the lines she was looking at were Zelda and Christopher Fischer, and she also purchased washable sportswear pieces from Planet.

Peace of Cloth was selling immediates at the show. “We can ship within 24 hours. People are looking for color and are feeling positive about 2013,” said Jaime Nortman, managing partner. “We’re in stock and proudly made in New York City,” she said. Pants wholesale from $72 to $88, and jackets are $136 to $160. The line is geared to the better-bridge departments. She said she was also seeing a lot of action in pure white in suiting. “Women want to get dressed again. They’re tired of cardigans. It’s a more polished look,” she said.

David Kahn, a Los Angeles denim resource, was showing lots of jeans at the show, particularly prints and bright floral patterns. The line, which wholesales from $74 to $98, was also doing well with pastel colors for spring, said Jessica Bortko, sales manager.

Level 99, a contemporary sportswear and denim firm, makes all its apparel in Los Angeles. Its jeans wholesale from $50 to $68. Blake Rayon, Southeastern representative, said the company was doing well with their relaxed jeans, selling in stores such as Nordstrom and Anthropologie.

Avenue Montaigne was doing well with new pants that hold in the stomach. It’s a four-way cotton stretch, cropped pant that wholesales for $65. It was also selling its stretch poly-viscose pants with ultrasuede side inserts that wholesale for $90.

Zelda was selling immediates and spring merchandise at the show and introducing fall. “People collect Zelda. It’s a modern vintage collection,” said Lisa Attea, director of sales. For spring, she was selling peplums, eyelets and prints. It also offers an in-stock program which consists of proven jackets, pants and skirts.

Minnie Rose introduced a new swimwear line, “The Slim Suit,” at Intermezzo, which is a collaboration with Kandice Pelletier Swimwear. In addition, Minnie Rose showed knitted dresses, sweaters, pants and shorts. “We’re getting amazing reaction to all the crochets,” said Lisa Shaller-Goldberg, founder of Minnie Rose. “For us, it’s been nonstop. We’ve opened so many new accounts today.”