Retailers Shop for Immediates and Fall-Holiday at Intermezzo and FWD

Ruffles, flounces and off the shoulder tops were key looks throughout the show. 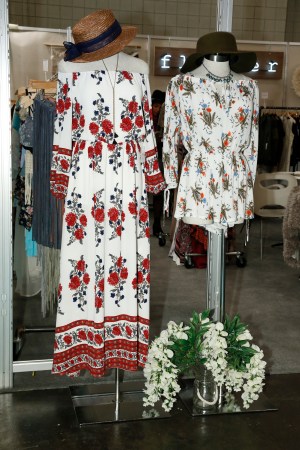 On a drizzly Tuesday morning, retailers had sunnier days in mind. They were shopping Intermezzo and FWD for immediates for summer and fall/holiday merchandise. The exhibition, which opened Monday, runs through Wednesday at the Jacob K. Javits Center in New York.

Ruffles, flounces and off-the-shoulder tops were key styles throughout the show. Vendors appeared to be doing brisk business with bohemian looks, fur vests, dresses and denim. The Flex area, a dedicated area for contemporary activewear, was attracting retailers purchasing leggings and gym accessories. The show also featured a young contemporary area called FWD that spotlighted 28 vendors in the apparel, denim, accessories and footwear categories. With piped-in music and a photo booth, this was FWD’s largest showing, almost triple the number of vendors as the previous February show. Two complementary seminars were offered on site for retailers.

While Intermezzo’s hallways weren’t overflowing with retailers, vendors said they were pleased with the pace of business.

“This is my favorite show,” said John Eshaya, owner of Jet by John Eshaya. “People have time to sit and look and they’re not rushing to finish a huge show that has 75 percent of what they don’t want.” He said his customers were buying immediates and a little fall. He was selling a lot of specialty jerseys with mixes that are “classic and cool.” He was also doing well with his cigarette-skinny 50s sexy denim pants. Some were ripped with a seam up the back. “They [stores] want simple, sexy and familiar, but new. They don’t want to go too much out of the box, but still want fresh for their stores,” he said, calling business “pretty good.”

Bailey 44 had an active booth. “Business is great,” said Melissa Dench, senior vice president of sales at Bailey 44. She said the brand was doing well with their pants, in ponte, as well as a silk pajama fabric. “We went after the pants category last season and we’re continuing with them. They’re gaining momentum and the pull-on pant is really comfortable,” said Dench. She said Bailey 44 was selling twofers and bodysuits in four bodies.

Parker was also experiencing a good show with its eveningwear and dresses for holiday, said Heather Pachota, account executive for Parker Black. The brand was showing sexy gowns and dresses for November and December delivery with “lots of sparkle.” Some of the beaded dresses had Art Deco styling, and other hand-beaded dresses were very sleek. The dresses wholesale from $181 to $452.

Kerri Kovler, owner of Teen Angel, a two-unit retailer with stores in Delray Beach, Fla. and Parkland, Fla., said she was shopping Intermezzo and FWD for apparel for girls, tweens, contemporary and moms. “We’re looking for more immediates, and transition into fall,” said Kovler, who has been in business for 20 years. She said she was seeking summer dresses, travel dresses and clothes for girls who go on vacation, teen tours and sleepaway camp. She said she was buying denim from Blank. The store also does well with jeans from Paige and Level 99. Another resource she liked was Veronica M, noting that she buys the rompers and dresses that are on the retro side. “She’ll make exclusive things for our store,” said Kovler. One look she was excited about at the show was criss-cross tie-front tops. She also noted that in her store, she likes to mix price points. “Not everyone wants to spend $150 per item. This way you don’t alienate people in your store,” she said. “It also makes inexpensive things look more expensive.”

Kovler noted that she uses Instagram frequently to promote her business. For example, her daughter Brittany, who’s in charge of social media, will post great outfit ideas on the platform. “It’s a great way to draw new business and to advertise. You can put out a great outfit in the morning and drive business your whole day,” said Kovler.

Holly Green, owner of Infinity, which has four stores in the New York area, said John Eshaya’s line looks great, as well as Lauren Moshi and Bella Dahl. She liked the plaid shirts at Bella Dahl. She also liked Acrobat sweaters, especially a camouflage sweater. She, too, mentioned the off-the shoulder looks and bomber and varsity jackets as key looks.

Stacy Levinson, an owner of Brittons, in Columbia, S.C., was shopping Avenue Montaigne for their boot-cut pants, as well as their wide-leg pants. “We’ve been in business 66 years and my father taught me nice fabrics are important and nice construction. She said she liked the straight-leg pant for all the long chunky sweaters, but was excited about the boot and wide-leg. “We’re looking for novelty legs,” she said.

Nancy Lerner, owner of Nancy’s2, a home-based business in Mt. Pleasant, S.C., was shopping Terez for leggings. The former brick-and-mortar retailer, called Nancy’s, now does all her business at her home-based company. She visits people’s homes and they come to her home. She said she’s been buying Terez’s line since 2012, and was purchasing leggings with skulls, as well as black leggings and see-through tops.

Meanwhile at FWD, Bernard Chung, sales manager of Flutter, a Los Angeles brand, said business has been very good. He was doing a brisk business in dresses, rompers and basic T-shirts for fall-holiday. “The focus has been casualwear,” said Chung, noting the brand offers a lot of bohemian and feminine looks. He said FWD is better than it was last time. He noted the show was more spacious and there’s been more marketing.

Madison Slate, a sales associate at Mittoshop, said FWD was going well. She’s been selling a lot of merchandise for immediate delivery for spring. “Everyone’s loving the prints and the flowered dresses,” she said. “And soft tie-dyed tunics have been very trendy this season.” She said she was pleased with the FWD show. “It’s working out. It’s very diverse and we’re getting clients from all over the country.”