In two short years, MRket has cemented its position as the leading trade show for dressy and classic men’s wear brands. 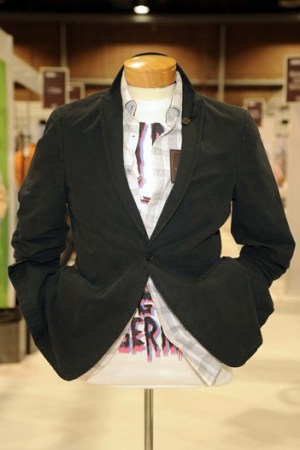 In two short years, MRket has cemented its position as the leading trade show for dressy and classic men’s wear brands, and the summer session was no different as the event’s net square footage jumped 30.9 percent from last August’s show, with 260 brands exhibiting.

“Especially during these still-difficult times…it is particularly heartening to have played such a large role in pulling the high-end men’s wear industry together,” said Britton Jones, president and chief executive of Business Journals Inc., producer of MRket.

That sense of cautious optimism radiated throughout the show as exhibitors and retailers alike noted a jump in business. “Business is different,” said David Levy of Levy’s in Nashville. “When there’s traffic in the store, sales follow, but it takes more these days to draw shoppers in the door.

“Our clients have not lost their personal paychecks,” Levy added. “But they lost assets and stopped shopping because they felt guilty about it. But now they’re more energetic and they’re tired of not shopping.”

He, and other retailers, articulated the need for “fun, sophisticated” merchandise as well as apparel with equal parts style and value.

S. Kuhlman, in its first season of wholesaling, appeared to meet all those criteria with sportswear inspired by contemporary Italian style. “It’s an easy, understandable look that is perfect for the U.S. market,” said proprietor Scott Kuhlman of the spring collection’s washed cotton suits, microstripe polos, and trim-fit cotton slacks. The line included 18-gauge cashmere sweaters with sweatshirt details, which retail for $195. The brand’s large woven range, which included ginghams, double-face checks, garment-dyed solids and whimsical space prints, starts at $95.

However, exhibitors at the luxe end of the spectrum said business had been tough. Bird Dog Group, which represents niche European accessories such as Breur neckwear and Codis Maya cufflinks, reported challenged sales but said interest for its high-priced accessories — like Corgi hand-loomed socks that start at $35 retail — had begun to pick up. “Items and novelty-driven pieces, like colorful rugby socks, are selling,” said Bird Dog agent Jim McKenry.

Ike Behar, the opening price dress shirt for Neiman Marcus, has had to adjust its pricing strategy to better meet consumer demand. Steven Behar, vice president of marketing and design, said in addition to lowering prices 10 to 15 percent, the company has instituted a pricing structure that offers retailers better prices for larger orders. For spring, the brand beefed up its selection of weekend-friendly sport shirts — a big call out at the show.

Skip Gambert, a custom dress shirt manufacturer, said he had a good show due to his niche. “Inventory is devil to the retailer,” he said. He added he did well with printed shirts in either all-over patterns or trim.

But some retailers felt the statement sport shirt was nearing the saturation point. Murry Penner of M. Penner in Houston said his goal at MRket was to find “items — unique things.” He shopped primarily sportswear and was seeking knitwear. “We’ve ‘shirted’ our customers to death,” he said. “How many preppy shirts do you need?”

But the demand for woven shirts hadn’t appeared to slacken at Robert Graham, a leader of the embroidered sport shirt category. Brand president Neal Kusnetz said its continued success in the shirt market has supported sales in ancillary categories, like hosiery, hats and cufflinks. “Retailers are buying us as a brand,” Kuzentz said. “They are stepping up with larger commitments and seeing the lifestyle component of Robert Graham. Stores are rating their merchandise. They know what’s working and what is not.”

Nat Nast also reported a strong show. Barbara Nast Saletan, executive vice president of sales and marketing, said the company was doing well with a lightweight jean as well as colorful solid shorts and novelty polos. Washed linen with embroidery, performance cotton golf shirts and cotton stretch shorts were also popular. The company also offered a summer collection for the first time and was highlighting its swimwear, designed to go “from sidewalk to sea,” he said. “They look like fashion shorts but have a mesh liner,” Saletan said. The swim trunks, in various lengths, are priced to sell at $75 retail.

On all products, she said, the company managed to lower prices to offer higher initial markups for retailers — 60 to 65 percent — as well as value to the consumer. “It’s all about knowing the sweet spot at retail,” she said.

Southern Tide, which launched in 2007 in Greenville, S.C., found retailers drawn to its colorful collection of Skipjack Polo shirts, which are now available in short- and long-sleeve versions as well as solids and stripes. Flat-front Channel-Marker Khakis, pinpoint oxfords with stretch, bathing suits, boxers and T-shirts were also offered.

While oriented to classic styles, MRket also housed exhibitors with trendier product, including Kroon, which reported brisk sales of its trim, one-button, peak-lapel sport coat. “I’m actually a little surprised,” said co-owner Brent Kestin. “A year ago I couldn’t give this away and now it’s on many order [sheets].” The brand also showed military-inspired cotton coats.