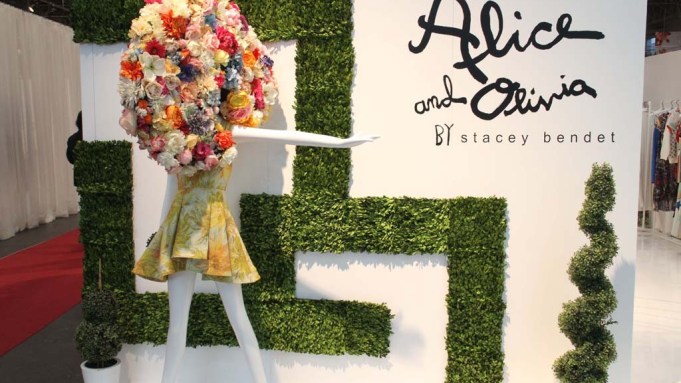 NEW YORK — Spring was in full bloom at Coterie.

Lots of color, bolder patterns and conversational prints took center stage, as well as fuller skirts, culottes, maxidresses, collegiate preppy and bohemian looks. Traffic appeared steady at the three-day show at the Javits Center. The show featured 1,488 exhibitors, versus 1,428 a year ago, and of them, about 240 international brands, a 13 percent increase from a year ago.

Among some of the vendors showing at Coterie for the first time were Zadig & Voltaire, The Kooples, Sam Edelman Apparel, Solid & Striped, Three Pamella Pamella Roland and All Things Fabulous. The show also featured special areas called TMRW, featuring up-and-coming lines such as Rodebjer,  The Perfext and Whit, and French Rebellion highlighting Paris brands that haven’t entered the U.S. market yet, such as Athé Vanessa Bruno, Do Paris, Espartine, Inoui Toosh, Le Facette, Margaux Lonnberg, Nicolas Messina, Paradis Perdus and Rad Hourani. In addition, firms such as Theory +, Splits 59 and Under Armour introduced their activewear brands at the show.

“I think there’s a retro thing going on with lots of Sixties and Seventies looks, with kitschy conversational prints,” said Courtney Quinn, contemporary fashion analyst at Doneger Group. For example, Nicole Miller was showing orange (the fruit) prints and Rebecca Taylor had cat prints. The fuller midiskirts, which were offered by many vendors, gave the show a retro feel, she said. Firms were also showing culottes. She called the cropped tops and fuller skirts “the new suit,” or “matched set.”

Other important trends at the show were collegiate preppy looks — with lots of navy-and-white stripes and a country-club element — and bohemian looks — “the whole festival bohemian trend still lives on,” said Quinn. Vendors were showing a lot of riffs on men’s wear shirtings; destruction and boyfriend denim; denim skirts; track pants styles in denim, and white denim (including destruction in the boyfriend jean), she said. She also saw an interest in straighter legs (those with 12-inch openings), opposed to skinny. She added that wide-leg denim is becoming more prevalent.

Retailers appeared pleased with the offerings.

Lynn Puro, owner of March Boutique in Briarcliff Manor, N.Y., said, “It’s been great. There are more florals for spring, brighter colors and bolder patterns.” She was also seeing a lot of cropped tops and fuller skirts, as well as maxidresses. “Cutout in tops is a strong trend,” she said. Among the lines she would be buying were Bailey 44, Trina Turk and Tracy Reese.

Randi Siegel, owner of Rapunzel’s Closet, a women’s specialty store, and Lil Rapunzel’s children’s store in Palm Beach, said she bought some “great new destroyed jeans” from J Brand with an unfinished hem in a skinny body in white and black. “We are loving the unfinished hem looks on jeans,” she said. In addition, she bought Equipment’s printed shorts. “We do very well with Equipment blouses and short patterned shorts, so this will be a great addition to our store. It’s perfect for Palm Beach,” she added. She also picked up a new line, Pipen, designed by Lauren Moshi, which had lots of embroidery, beading and tie-dye.

Siegel also purchased Sundry, which she called “fun and comfy,” with cropped sweatpants in red and navy, as well as Aztec prints in tops and pants. She noted that Joie had lots of rompers and dresses and some new prints. “I think Joie stepped it up for spring. The deliveries were enormous and there was a lot to choose from,” said Siegel. In addition, she said Splendid had a great zebra print in pants and tops. She said they weren’t actually zebra stripes, but a print made up of tiny zebras.

Allyson Bass, owner and buyer for Frances Heffernan, a women’s specialty store in Winnetka, Ill., added she was finding “wonderful knits” at the show, and was also seeing newness in activewear. She liked the activewear she saw at Koral, especially some of the heathered pieces. She was also excited about the slouchy pants and printed tops and dresses.  “We like the new tea length,” said Bass, admiring a Cynthia Rowley subtle printed dress that was being modeled at the show. “We like more muted prints, they almost look like paintings,” said Bass.

Annette Duclos, owner of Looks, a contemporary retailer in Harvard Square in Cambridge, Mass., pointed to the tissue-weight knits she saw for spring, from vendors such as Margaret O’Leary. She also liked the modified harem pants she saw from Hoss-Intropia; Elm by Matthildur, which showed “good, dressy and funky” looks, and some of the prints, which were smaller and more subtle.

Elaine Andriotis, owner of Beginnings, which has two contemporary stores in Armonk, N.Y., and Scarsdale, N.Y., was happy with the offerings in the denim area, such as distressed denim, patched denim and athletic-inspired looks. She noted that many of the denim companies she buys, such as Seven, Genetic and AG, were adding knit lines. She said she also bought a lot of “great cardigans, colors and textures” at Margaret O’Leary.

Sharon Weissman, buyer for Fame, a women’s specialty store in Cedarhurst, N.Y., was shopping for spring looks for the holidays and Passover, which is a big season for the store, which caters to the Orthodox community. Some of the lines she was buying were Diane von Furstenberg, Clover Canyon, Pink Tartan and Ted Baker. She said her goal is to show the customers that “you can look dressed and stylish in a modest outfit.”

Tita Longoria, who was shopping for Schor’s in Brownsville, Tex., said she was buying a lot of leathers and fringe at the show. She liked The Perfext, designed by Elyse Walker. “They had beautiful sueded jackets with fringe and boots with fringe,” she said. She also liked the laser-cut leather jackets at Lamarque, which is based in Montreal. Also on their buying list were sheer trenchcoats from Marienbad and linen tops and blouses from C.P. Shades.