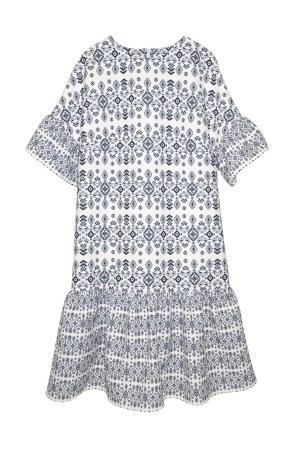 PARIS — With no time for nostalgia, organizers at Paris fashion trade show Who’s Next looked to the future for the event’s 20th anniversary edition at the Porte de Versailles.

A campaign shot on site, featuring the original car from the movie “Back to the Future,” had as its tag line “2035 for the Next 20 Years” with among the celebrations a glow-in-the-dark-themed exhibition of products by a selection of participating brands.

The sprawling four-day event, which wrapped on Jan. 26, was arranged into four new areas — Private, Trendy, Urban and Studio — with Fame, home to more fashion-forward brands, in a separate hall. Avoc, a Paris company that does set and interior design and art direction as well as produces a clothing line, was the creative force behind the modern scenography of the fair.

“We’re definitely going away from the sporty look and stepping into boho Seventies,” said Paula Adamova, wholesale assistant at Somewhere London, who cited My Sunday Morning among the best collections. The fledgling label’s exclusive prints are produced at a factory in Como, Italy.

“It just caught our eye. The designs are really tasteful — they’ve done a tiger print but in a very good, light way,” she said.

“We need a bit of whimsy, something to brighten the day,” said Erica Saylor, associate buyer for sweaters and fine gauge at Anthropologie, who mentioned Beetlebeetle and Kelly Love among her favorite collections, each for their “beautiful prints and optimistic and fun shapes and silhouettes.”

Key pieces for fall include sweatshirt bodies, chinos and “the coatigan,” she added.

Considering the show’s key timing, at the beginning of the season, several retailers bemoaned a lack of novelty. “It was more about continuity and carryover than real newness. Brands focused on their DNA with no risk and new creative collections were lacking,” said Jennifer Cuvillier, head of style at Le Bon Marché. “Soft accessories were quite strong, with new material treatments, fresh winter prints, beautiful knits and fur. It was the strongest category in terms of novelties.”

Valérie Gerbi, head women’s buyer at Merci, who was on the hunt for mix-and-match pieces, concurred. “I’m disappointed that there were so few new brands at the show. I would have loved to have been more surprised. A new dynamic has to be found for next season,” she said. Gerbi singled out Soeur as a label to watch, saying, “The concept and collection is interesting.”

Some felt disoriented by the show’s new organization, though several vendors gave it a thumbs-up. Among them was Daphnea, a French women’s fashion label that presented in the new Trendy hall. Jeremy Chen, director of sales, said the brand had more traffic than in previous seasons and good feedback. “We had lots more clients, mainly from Europe, with a few Canadians.”

Morgan Chauvin, designer at Edween Pearson, said the brand’s new position in the Urban section worked to their advantage. Down jackets were among the bestsellers. “Customers were in a good mood,” he said. “They seemed more confident.”

regions Who's Next
load comments
blog comments powered by Disqus