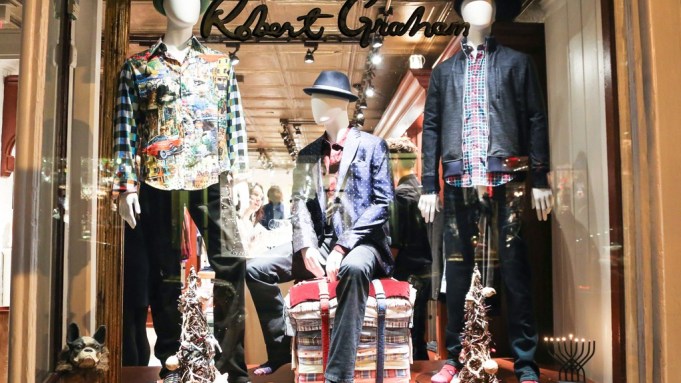 NEW YORK — Robert Graham has jumped into the fray in the West Village, opening a 1,260-square-foot flagship at 380 Bleecker Street. The boutique, which carries the complete Robert Graham assortment of men’s sportswear, outerwear, denim, furnishings, accessories and women’s sportswear, is the fifth unit to open this year and brings the company’s store count in the U.S. to 11.

“This is such an important branding event for us,” said Michael Buckley, chief executive officer, noting that the store is expected to attract locals as well as tourists. It will also serve as a showcase for the company’s wholesale partners who can visit the location to see the entire range of product and the company’s most innovative merchandising ideas.

Although the brand is known for its woven shirts, Buckley said that category only represents 40 percent of the mix in the store. The rest includes sport coats, pants, knitwear, accessories and footwear. Several items, including shirts and some accessories, have been created especially for this store.

The boutique was designed by the brand’s founder and chief creative officer Robert Stock and features a vintage look and feel, including custom faux-tin ceilings, hand-picked carpets, a patchwork couch made from the company’s silk fabrics, a chair made from roughly 300 shirts from past collections and hand-sewn velvet and silk curtains for the dressing rooms. One of the display tables was constructed from vintage car hoods and another features a rudder from a D79 airplane.

“This is a 150-year-old building, so we wanted it to be homey, cool and fun,” Stock said, adding that he worked on the design of the store for three months.

Since getting a cash infusion from Tengram Capital Partners LLC in June 2011, Robert Graham has doubled its volume, Buckley said, and expanded its reach by licensing a number of different categories including tailored clothing, denim and eyewear. Earlier this week, the company signed a license for men’s footwear with Edison, N.J.-based LJP International. A fragrance is in the cards for 2015.

Bill Sweedler, cofounder of Tengram, said: “They always had the raw DNA. What Etro is to Italy and Paul Smith is to the U.K., Robert Graham is to America.”

Sweedler said the brand has “evolved dramatically” since Tengram got involved, and the brand has been successful in executing its game plan. “We look at it as a playbook with five chapters,” he said, noting that the plan includes building the wholesale business, expanding the assortment, adding licensed categories, opening in-store shops and adding company-owned retail stores.