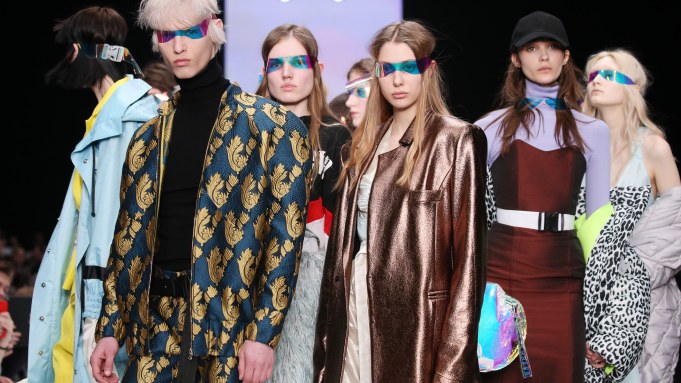 MOSCOW — Just as Russia prepared to vote in its most recent presidential election, its capital city hosted Mercedes-Benz Fashion Week Russia, during which more than 50 local and international brands presented their collections in the Manege exhibition hall, just steps from the Kremlin and Red Square.

While the quality of the collections overall was mixed, audiences were enthusiastic, and buyers and designers alike say that, despite challenges, it’s a great time for Russian fashion.

“Something happened with Russia over the last 20 years. In a good way, people have become very, very, very patriotic. They are not afraid to say that they love their country, that they support each other,” said Aizel Trudel, founder of Aizel, a concept store in Moscow, and Aizel.ru, an e-commerce site selling both Russian and international brands. “They are proud to say they’re Russians, even with all these fake attacks in the news worldwide, we still don’t care about that because we believe that we’re living in a great country. We love our president, we like what he does. Because we don’t believe in all the fake news; we see the reality here and we work here every day. And I think that overall in the country, people are supporting each other more and more every day.”

Artem Shumov, a men’s wear designer whose collection was one of the most buzzed-about during the week, says there has also been a shift in how Russians dress in recent years.

“It was a surprise for me, because for the last few seasons the people, maybe they trust us more, but they are very open to buy more styles, and they are open to more things. That’s what I like about Russia, the people are really open, especially for the last one or two years in Moscow,” he said.

But while Russians may be happy to support one another on a personal level, Russia Fashion Week is not getting support from the government.

“We are not financed by the government, because we used to have some projects with the government, but the problem with the government is when you get money from them, they start telling you what you have to do. Whom you have to choose and so on,” said Alexander Shumsky, president of the Russian Fashion Council and founder of Russia Fashion Week. “But if you choose to support the import factories instead of talent, real talent, it becomes not fashion week.”

Shumsky said that while he used to bring international designers such as Vivienne Westwood to present guest shows during fashion week in order to inspire local creatives, 80 percent of the designers who show have always been Russian.

“The main idea is to help Russian designers to emerge, to evolve and to help them do business and so on,” he said.

Stores such as Aizel, as well as Gum and Tsum — both large department stores in central Moscow — are helping Russian designers to do business by carrying their collections and promoting their designs with editorial and marketing campaigns. Last summer, Gum’s main shareholder, Bosco di Ciliegi, decided to open a pop-up store focusing only on Russian designers. After a few moves within the sprawling Gum complex, the store, called Section, is now preparing to move into its permanent home, which will be a two-level space including a coffee shop and ping-pong tables.

Maria Kovylova, a Bosco buyer in charge of Section, said she knew nothing about Russian fashion before she took on the project, but she has enjoyed learning about many young, emerging designers. The idea behind the store, she said, is to help improve the quality of Russian fashion through educational programs and competitions that will support local designers to study internationally.

“In Russia, there’s no good education for our designers,” she said. “I can see there’s lots of people who have a very good vision or they have style, but they don’t know how to make it in real life. One of the most important things is fashion marketing. They know that they can do something good — their design is something good, but they have no idea how to sell it or they don’t think they need a p.r. specialist or to make a strategy around their brand or improve their DNA of the brand. This is very important.”

Another major challenge facing the Russian fashion industry is the quality and cost of production. There aren’t many factories in Russia that do high-quality textiles and sewing, so much of the production tends to be done elsewhere, and import tariffs to get the products back into the country are very high.

Aside from Gosha Rubchinskiy, many Russian designers have already gained commercial success, either in their home country, internationally, or both. Trudel mentioned Alexander Terekhov, Vilshenko and Alena Akhmadullina as some of the strongest local brands working today. She said younger ones with potential include I Am Studio, T-Skirt, Laroom and Katya Dobryakova.

As for brands that show during Russia Fashion Week, Aizel has inked an agreement with the event’s organizers starting from this fall season. Moving forward, any brand that participates in the week will have the opportunity to use Aizel’s online platform to reach customers and sell their designs.

Kovylova said one of her favorite Russia Fashion Week brands is Shumov’s line, which is carried at Section.

“He is amazing,” the buyer said of Shumov. “I was at his show and I was, like, thank god there is someone like Artem who is doing that kind of design in Russia. After those kinds of shows I feel like there is hope there.”

Other brands she said give her hope are Outlaw, Fusion and Ruban.

While most of these didn’t show during the most recent season of Russia Fashion Week, that doesn’t mean the event was without promise. The biggest piece of advice overall that most of the designers who showed need to heed is to edit their collections down to only the strongest looks, as far too often the shows went on too long, losing the audience in the middle.

Highlights of the week included: