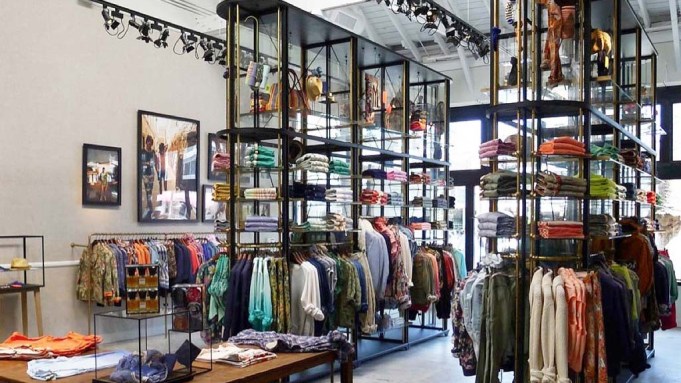 Earlier this month, the trendy Dutch brand opened new stores in San Jose, Calif.’s Santana Row shopping complex and in University Village in Seattle, lifting its total U.S. store count to 12, plus an additional three franchised units. The company has so far opened six stores this year, with another two to open next month, in Denver’s Cherry Creek mall and Portland, Ore.’s Pioneer Place mall.

The retail rollout has been propelled by the brand’s acquisition by an affiliate of Sun Capital Partners in 2011. “Sun Capital has helped us accelerate the growth of the brand. That’s what they are there for,” said Alex Jaspers, brand manager at Scotch & Soda, in a rare interview at the company’s Broadway store near Manhattan’s Union Square.

The company began seriously investing in U.S. retail following the sale to Sun Capital, opening six units in 2012, following in the path of its first franchised unit on New York’s Lafayette Street that opened in 2010.

Globally, the company now operates 104 freestanding stores, with new units planned by yearend in places as disparate as Sydney; Oslo; Bordeaux, France, and Istanbul and Ankara in Turkey. Outside the U.S., Scotch & Soda owns its stores in the Netherlands, Germany, the U.K. and Austria, while operating a franchise model in other international markets.

Including wholesale, the brand is distributed in more than 7,000 points of sale globally, including 200 shops-in-shop, mostly in the European Union. At the time of the sale to Sun Capital, Scotch & Soda’s total sales were about $350 million, a figure that has grown to more than $400 million, according to the company.

The U.S. market is forecast to become one of the brand’s largest, along with Germany, France and Italy. In September, Tony Strippoli joined as president of Scotch & Soda’s U.S. business. He was most recently with Diesel USA as vice president of sales.

There are about 300 points of wholesale distribution in the U.S., with key partners including Neiman Marcus, Nordstrom, Bloomingdale’s, Ron Herman, Atrium, Shopbop and Revolveclothing.com.

Earlier this summer, Scotch & Soda launched a dedicated U.S. e-commerce site, with prices in dollars and fulfillment from a new warehouse in California, rather than shipping from European distribution centers.

The diversity and assortment of styles offered by the contemporary brand each season is vast: 800 stockkeeping units in men’s, 800 in women’s, 350 in denim and 250 in kids, each split into four deliveries.

The Amsterdams Blauw range, which is a full collection of denim and denim-friendly sportswear, is sold in advance of the main collections as it is delivered to stores earlier. “We want to grab that early drop period,” explained Jaspers of the jeans, which retail for between $119 and $159.

In men’s, the company plans to launch a tailored-clothing line under the Scotch Atelier label for fall 2014, scheduled to first be shown to retailers at Pitti Uomo in January.

“We are not a standard design company. We pull influences from every region of the world — it could be the Orient, Hawaii or Morocco. We cut and paste and glue it together. From the fabrics to the prints to the details, even the smallest stitch is important,” explained Jaspers. “We are really led from a creative aspect, not a sales perspective. We don’t compromise on design, and creativity is number one for us. If our designers have an idea, we say, ‘Go for it,’ and our production and buying teams will make sure we get the right merchandise and price for it.”

U.S. stores opened earlier this year include the Broadway location in New York, Abbot Kinney Boulevard in Los Angeles, Newbury Street in Boston and Fashion Valley Mall in San Diego. The company declined to divulge productivity figures for its stores, insisting that it doesn’t place an emphasis on traditional retail metrics.

Neither does the company operate in a strict hierarchal structure. “We don’t believe so much in titles. We all work together and our communication lines are short. This works well for us and we strongly believe in this structure, since there is not one vision or one creative director,” said Jaspers.

Scotch & Soda was founded in the Eighties but relaunched under its current identity and aesthetic in 2001 by Eric Bijlsma, Joep Krouwels and Patrick Munsters. Krouwels and Bijlsma remain central to the creative and strategic decision-making process, but Munsters has exited the company. The brand today is headed by Jop Pollmann.

At the time of its acquisition, Sun Capital originally planned to operate Scotch & Soda under its Kellwood Co. umbrella but later decided to keep Scotch as a stand-alone entity, managed from its existing headquarters. Those offices and design rooms are situated in a light-filled, deconsecrated church in central Amsterdam. The company recently opened another 24,000-square-foot office space across the street, in a stately old building by the Keizersgracht Canal.

Every new Scotch & Soda hire, including retail employees, is flown to Amsterdam for several days of training. That investment is aimed at turning employees into true believers in the Scotch & Soda philosophy. Jaspers said it helps reduce turnover among workers, which can be a vexing issue for retailers. “People make the brand. It’s one of our mantras,” he noted.