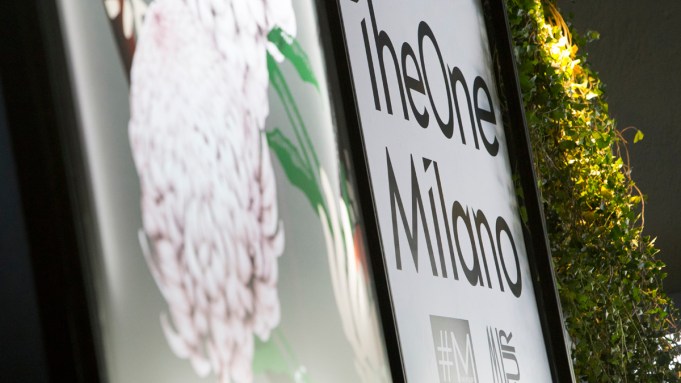 MILAN — The second edition of TheOneMilano haut-à-porter trade show in Milan rustled with the intimacy of a quiet boutique. Over the four days of the fledgling luxury clothing and fur show, slightly fewer than 4,000 buyers milled around 150 or so exhibitors showing spring collections across 27,000 square feet.

The merger of two former fairs, MIPAP (ready-to-wear) and MiFur (fur), it was a fraction of the size of February’s edition, as only four fur exhibitors showed for the warm season collections. By contrast, the February show spread across 151,200 square feet and attracted 11,150 visitors to more than 244 exhibitors, 164 of whom sold fur.

“First and foremost, it must grow,” said Elena Salvaneschi, secretary-general of TheOneMilano. Previously, the secretary-general of MiFur, she said she was evaluating strategic paths to take, but expressed confidence in the potential of the new fair to tap market synergies. She cited the PwC research released in February, which showed the Personal Luxury Market growing at a compound growth rate (CAGR) of nine percent from 2015 to 2020. She saw this as evidence that there is room to develop a showcase for commercial luxury fashion because, as, in her view, Milan’s runway and trade shows — which include Super and White — are primarily focused on research and fresh talent.

“A voice is missing that does not just consist of research designers,” Salvaneschi said.

In theory, high-end clothing should attract buyers intimidated by the idea of traveling to a separate fair to peruse fur collections, she reasoned. Fur, after all, has been primarily distributed through clothing stores since at least 2006, according to the PwC study. Conversely, fur retailers could be attracted to luxury clothing as a way to extend their sales season.

“Clothing is a complementary product that facilitates buyers entering the fair,” Salvaneschi said.

Yet, the September show received mixed reactions from exhibitors and buyers.

“It’s been good,” said clothing designer and entrepreneur Vaishali Shadangule. “For the brand, the response has been very good.”

Shadangule is the founder of Vaishali S, an Indian couture and rtw brand that has staged runway shows at New York Fashion Week for the last three seasons and sells handcrafted contemporary art garments for 100 euros to 1,600 euros wholesale. For her spring collection, she showed diaphanous layered pieces with sculptural contours, revealing transparencies, and nature-inspired, textured needlework, with birds, leaves, tree bark, clusters of sprouting mushrooms, the imprint of raindrops, and tightly clustered butterflies. Shadangule designs her own fabrics and employs specialized village craftspeople to make them. She estimates she supports more than 1,700 families across India on her current production of 5,000 to 6,000 garments a year.

“I could easily double revenues this year,” Shadangule said. She credits her growth potential to a partner she brought on to handle business development, Dhwani Srivastava. The label has offices in New York, Milan and Mumbai.

Another luxury player, Alberto Vanuzzo, said, “Things are going well.” He is the head of sales and son of the owner of Suprema Srl, an Italian fur and leather outerwear specialist.

Vanuzzo took advantage of the spring show to present garments in mixed materials for a sportier range than usual, like a cream suede and sheepskin vest with a diagonal stripe of turquoise and cream mink. A zippered grey sweatshirt featured a subtle, silvery patina that blended its mix of cotton and suede panels. His bestseller was a classic denim jacket with sheepskin accents.

The fair was going “so and so” for Valentina Carlesi, who handles production for Libellule, a new label by a historic Florentine clothing company, Gennai. Libellule aimed for the young at heart with commercially fetching, mid-range prices. Garments cost on average 35 to 45 euros wholesale with content and style geared toward a 2.5 times retail markup.

A mid-range veteran of MIPAP fairs, Parakian Paris, expressed outright disappointment. The French label is known for vivacious prints and flattering silhouettes, and is in the midst of a relaunch. Earlier this decade, sales ranged from 20 million euros to 30 million euros but collapsed in recent years. European distribution dried up while its Chinese joint venture chain of mono-brand stores kept the brand alive.  Xavier Murer, who headed the Chinese operation, bought out the company this summer, restored two previous designers to the creative team, and sealed an advertising campaign to feature the French-Israeli actress Sarah Adler.  He also hoped to regain traction at the upwardly repositioned TheOneMilano.

“This fair has no appeal anymore,” Murer complained. “It’s nice to meet each other, but it’s not the point, it’s not the goal.”

He had a few orders, but missed the great flow of foreign buyers. He said MIPAP used to have 10 years ago.

“[The show’ is quite small, quite trendy, quite special,” said Ulf Lindgren, a Swedish buyer who owns a men’s and women’s clothing shop in Stockholm. “This is not a volume fair. There are no big chains.”

Asked if he planned to buy anything, Lindgren said, “For me it’s a bit too expensive and too special, but I love the creativity.”

Lindgren said Berlin trade shows were his hub for commercial fashion, but that he increasingly bought e-commerce overstock. Two years ago, web sites began calling him asking whether he was interested in clearing their inventory. He estimated that as much as 20 percent of his merchandise now comes from websites.

Chris Hwang, a Milan-based agent and freelance buyer for a variety of distribution channels in South Korea — and a former MiFur attendee — felt that combining MIPAP and MiFur hurt the luxury fur contingent.

“MiFur was better from a garment company’s point of view. It had more of an identity,” Hwang said. He expressed surprise at the new fair’s seasonal contraction.

TheOneMilano will show winter 2018 collections Feb. 23 to 26, and no doubt the furriers will be back.