The limited-edition collection of ready-to-wear, jewelry and lifestyle products was launched alongside an exhibition of Chen Man’s photographs and paintings at Shang Xia’s Shanghai maison. 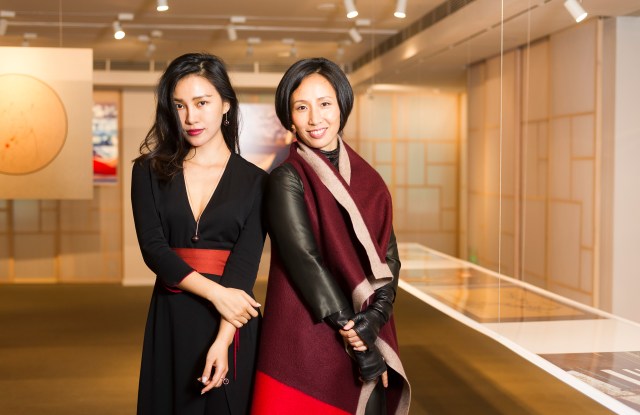 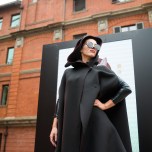 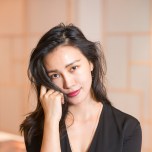 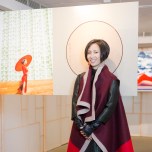 Known for her hyper-saturated, high-impact photography, largely of celebrities and often appearing on the covers of China’s biggest fashion titles, Chen Man has been friends with Shang Xia creative director Jiang Qiong Er for years. So it made sense for the two to collaborate on the photographer’s first foray into fashion design.

In working on the details of the collaboration, dubbed “Ebony Spark,” and the accompanying exhibition, both of which were unveiled Thursday at Shang Xia’s flagship Shanghai Maison on the retail thoroughfare of Huaihai Road, the two women agreed to show a different side of Chen Man by exhibiting not only her well-known photographs but also by pairing each image with a painting by Chen Man in the traditional Chinese ink painting style. Both Jiang and Chen Man studied traditional Chinese painting and calligraphy prior to pursuing design and photography, respectively.

Their other aim was to emphasize the notion of balancing opposite forces — a longtime theme of the Shang Xia brand, which gives traditional Chinese materials and craftsmanship a sleek designer update.

“Shang Xia from the first day is doing heritage and innovation, new materials and traditional craftsmanship and new technology, all of these things can be encountered. The best way is not to choose one or another, but to make the balance and find the harmony. With Chen Man this time, we are 100 percent loyal to this philosophy,” Jiang said.

The name of the brand itself — Shang Xia translates to “up down” — emphasizes the importance of opposing forces, Chen Man added.

“The balance between opposite sides is the traditional Chinese way. In Taoism, we have the concept of yin and yang. The colors that I used were black and red, in Taoism the red represents fire, which has power going up, the water is represented in the black. Balancing those opposite powers is the best way,” she said.

Materials utilized in the collection include wool, lacquered silk, zitan (a kind of sandalwood highly prized in China and used in antique furniture, though fashioned here into jewelry) and agate buttons. They were used in sleek, conservative styles with a hard edge designed to appeal to Chen Man’s legion of young, fashion-conscious fans – she boasts more than 5.6 million followers on Sina Weibo alone.

Jiang is confident that the collaboration, which after all retains many aesthetic markers used by Shang Xia, will not alienate existing customers, while at the same time attracting a younger demographic who look to Chen Man for style inspiration.

“I have lots of followers on my Weibo and other social media,” Chen Man said. “Before Shang Xia has been focused on the balance between modern and traditional. From my side, because I am a fashion photographer, I am more focused on the more cool and contemporary young women, and their attitude, because I am one of them.”

The collaboration is the latest in a series of moves by Shang Xia to broaden its reach to a younger demographic — China’s luxury consumers of the future — which has included releasing more accessible products. A red string bracelet can be bought for around $50 and a number of other jewelry, scarves and lifestyle objects such as tea cups and playing cards are now available for 500 to 1,000 renminbi, or $75 to $100. Shanghai Xia’s price points for more collectable items hover closer to 20,000 renminbi.

Now in its seventh year, Shang Xia has often been heralded as an avant-garde experiment in homegrown Chinese luxury. The brand has stores in Shanghai and Beijing, a presence via department store Lane Crawford in Hong Kong, as well as a stand-alone store in Paris — where Jiang said 90 percent of the customers are European, proving a Chinese luxury brand can also appeal to non-Chinese consumers. The brand also launched an e-commerce presence in March via a Tmall store, tapping into China’s booming online shopping market.

According to Jiang, Shang Xia is starting to gain momentum as Chinese consumers embrace the idea of China-made luxury products and quality and craftsmanship win over fans from established brand names among a fast-maturing luxury customer. Though Shang Xia declines to release sales figures, she told WWD the brand is seeing double-digit growth every month compared with the same time last year.