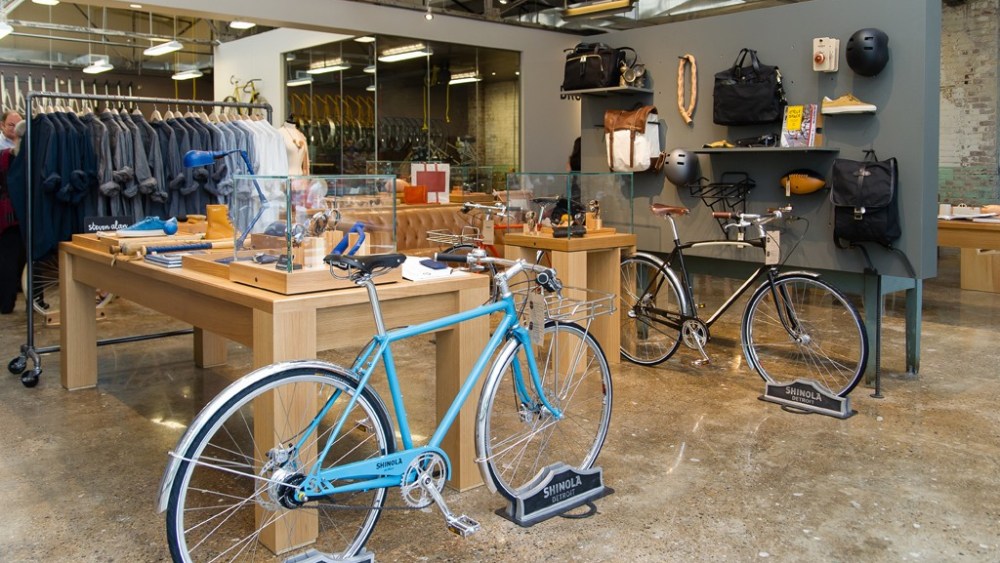 Detroit may have filed for the largest municipal bankruptcy in U.S. history on Thursday, but Shinola remains hopeful for a renaissance in the beleaguered city. Late last month, the Motor City-based watchmaker — backed by Fossil Inc. founder Tom Kartsotis — opened its first store a few blocks away from its 30,000 square-foot headquarters and watch production facility. On Friday, it opened the doors of a second store in New York’s TriBeCa neighborhood.

Despite Detroit’s precarious finances, Shinola executives said initial sales at its new hometown store at 441 West Canfield Street, opened June 27, have been robust. “We had a conservative plan, given that retail is untested waters for us, and it’s exceeded our wildest expectations,” said Heath Carr, chief executive officer of Bedrock Manufacturing Co., the investment and brand management firm controlled by Kartsotis. Apart from Shinola, Bedrock owns Filson, majority stakes in Original Jams and Mollusk, and minority stakes in Steven Alan, Clare Vivier and Marissa Webb.

Both the Detroit and New York stores carry a full range of Shinola lifestyle product, which apart from men’s and women’s watches ($550 to $725 at retail) includes bicycles, leather accessories and stationery, all of which are made in the U.S. There are also special items like shoe-shine products — Shinola was originally a World War II-era shoe-shine brand — vintage Louisville Slugger bats with hand-wrapped leather grips and Shinola footballs.

Other American-made brands are sprinkled throughout the store, including shirts from Gitman Bros., bags from Filson and collaboration product from companies like Map of Days, which created colorful leather-wrapped bicycle locks that look more like works of art than antitheft devices.

Mirroring the brand itself, the Shinola stores were designed with an eye for history but leavened with a modern sensibility. Overseen by the Rockwell Group and Shinola creative director Daniel Caudill, the 2,000-square-foot New York store at 177 Franklin Street boasts double-height ceilings, exposed brick and polished concrete floors.

“There are so many layers to this brand, and this really brings all of them together,” said Caudill of the varied merchandise mix.

A faux skylight, backlit by LED lights, casts a warm glow into the interior, while a spiral staircase winds its way up to an elevated catwalk where clerks can access exposed inventory. One wall is affixed with a massive, sculptural Thirties bronze Mercator map of the world, a stately relic of that era’s machine-age craftsmanship.

Both the New York and Detroit stores have newsstands for customers to browse. The New York store — located in a seven-floor building acquired by Bedrock in 2011, which houses offices for several of Bedrock’s brands — is fronted by a café operated by trendy downtown restaurant The Smile. The 5,000-square-foot Detroit store, which doubles as a production facility for Shinola’s bicycles, offers a cold-pressed juice bar operated by Drought.

The Detroit store is located in an up-and-coming industrial area that is still largely devoid of retail. “It’s still a bit under the radar today, and there’s still a lot of vacant real estate around us, but it’s becoming more trendy,” said Carr optimistically, pointing out a nearby microbrewery.

Since launching via its e-commerce site in March, Shinola’s exclusive wholesale partner has been Barneys New York. That will expand to 150 new doors in September, including Neiman Marcus, Bloomingdale’s, Steven Alan and independent jewelry stores. Later in the fall, the brand will launch internationally in 30 to 40 doors in Germany, France and the U.K.

Barneys has reported strong sales for the new brand. “We’ve experienced an exceptional response,” said Sarah Blair, vice-president and divisional merchandise manager of women’s accessories at the luxury retailer. “Shinola’s brand ethos of beautiful American craftsmanship, coupled with the sustainable model of rebuilding one of our country’s greatest cities, is a compelling story to support.”

Shinola has had some trouble keeping up with demand for its watches and is adding employees to its production facility. “We have not been able to keep up with demand, which is a fantastic problem to have,” said Carr. That may augur good things for both Shinola and Detroit down the road.