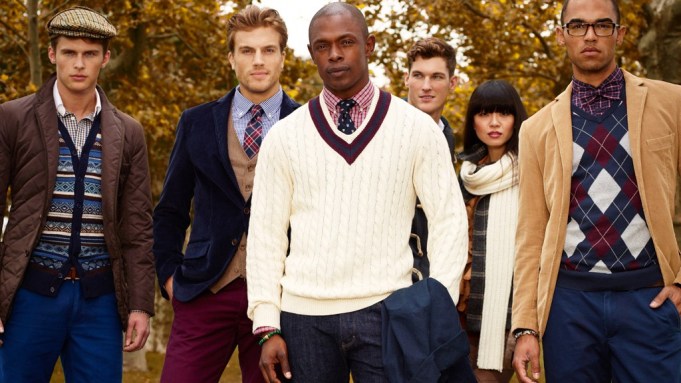 Russell Simmons has a new partner for the relaunch of his Argyleculture men’s label this fall — Joseph Abboud.

The hip-hop mogul came up with the concept for Argyleculture, which is preppy-inspired and targeted to what he calls the “urban graduate,” when he was with Kellwood Corp., which purchased Simmons’ Phat Farm business for $140 million in January 2004. When Simmons split with Kellwood in 2007, he took the Argyleculture label with him.

He produced the line on his own for two years before licensing it to LF USA, a subsidiary of Li & Fung Ltd. That relationship has ended and he has now signed on with Abboud, president and chief creative officer of HMX Group, with whom he is designing the collection. It will make its debut at a press breakfast at the HMX offices Wednesday. HMX has obtained the license for design, production and distribution.

“Finding the right match is tough,” Simmons admitted. “Sometimes it works, but most of the time it doesn’t. But this is Joseph Abboud.”

Simmons said Abboud’s classic yet modern sensibility was the perfect fit for the line, which will be sold in department stores next to collection powerhouse labels such as Tommy Hilfiger, Ralph Lauren and Calvin Klein. “We’re keeping our fingers crossed and our heads down.”

The launch will be a “full men’s sportswear collection,” according to Glen Farraye, president of the Simmons Design Group. It will include jeans for $69.50, knitwear for $59.50 to $125, outerwear for $98.50 to $245, sport shirts for around $80, sweaters for $89.50 to $155 and trousers for $79.50 and $89.50. There are also “completer pieces,” such as soft jackets and blazers that are being produced under license by Peerless, Farraye said. Eventually, he said, the company hopes to add a full clothing assortment. There is also an eyewear component.

“This is like preppy on steroids,” Abboud said of the collection. “There are a lot of preppy brands out there and no one does traditional preppy better than Ralph Lauren. But this is more irreverent. The colors are bright and the styling is aggressive. Traditional preppy has rigid boundaries and this pushes the envelope.”

Although Argyleculture has been “in and out of the market since 2008,” according to Farraye, this is the first time it has been designed as a complete collection. Simmons said he is “really dedicated to this,” and pointed out that it took Phat Farm five years to “pop.” And he’s convinced that the timing is right for this kind of line. Argyleculture is targeted to someone who grew up wearing urban business, but then “had nothing to graduate to, so they bought Ralph Lauren,” Simmons said, adding that he expects 80 percent of the customer base to be “non-African-American. This is a white space that just has to be spoken to.”

Simmons said the association with Abboud and HMX came as a result of Macy’s Inc., which facilitated a meeting between the two. “Macy’s was an advocate of HMX as a solid partner for the brand,” Farraye said.

The department store will be the primary source for the collection, but it will also be carried at other retailers such as Belk, Farraye said.

According to Jeff Gennette, Macy’s chief merchandising officer, “We believe the updated Argyleculture brand will be an important part of our Impulse offering for men at Macy’s, appealing to active ‘millennial’ guys in their 20s who dress for comfort and style. We are especially pleased about the exceptionally talented resources — Russell Simmons, Joseph Abboud and HMX Group — who are coming together to create a collection that will be distinctive and on-target for the lifestyle to which our customer aspires. We are planning for Argyleculture to launch in 100 Macy’s stores and on macys.com in the fall, and expect to expand it to additional stores in the years ahead based on an enthusiastic response from customers.”

Farraye said Simmons will be the “spokesman for the brand, not the face” and is expected to make personal appearances to promote the collection. Abboud is also expected to be involved in some promotional materials, he said.

The brand will also be available on Simmons’ Argyleculture Web site. “We’re hoping to do a lot of business on that,” Farraye said.