Slow and Steady Growth for Chaiken

The San Francisco-based sportswear brand is putting the pieces together to become a factor again in the fast-growing contemporary market. 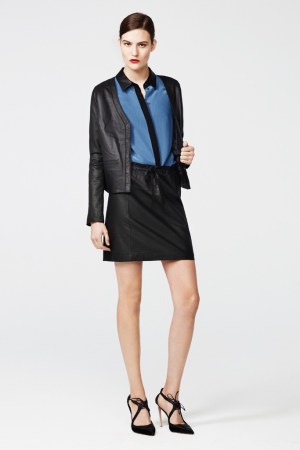 Chaiken, the San Francisco-based sportswear brand, is putting the pieces together to become a factor again in the fast-growing contemporary market.

The brand, which was relaunched in 2010 as Chaiken and Capone and has since gone back to the simpler Chaiken, is building on several fronts. The company relaunched its Web site, designed by Sweden Unltd.; is beginning to show major specialty stores the collection, and has hired Jeffrey Chow as design director. Other moves in the past year and a half were the naming of a president, David Lazar, who is based in San Francisco, and the hiring of Kim Vernon, president and chief executive officer of Vernon Co., as a business consultant.

“Since David [Lazar] has come aboard, we’ve done a lot of refining,” said creative director Julie Chaiken, who cofounded the brand in 1994.

Lazar joined the company in January 2011, having previously been founder and ceo of Twenty, president of Three Dots and vice president of merchandising, men’s, at Express.

Since the relaunch, Chaiken said they’ve taken stock of what was working and what wasn’t and moved into a new space at 785 Market Street in San Francisco, and opened a showroom in New York at 230 West 39th Street.

Chaiken, which has previously shown at Fashion Coterie, decided this time to show at Designers & Agents, which runs through Thursday.

Hiring Chow was a key move for the brand. The designer moved to San Francisco in April. A winner of the Ecco Domani Fashion Foundation Award, Chow has worked for Poleci, Perry Ellis International, Esprit, Tommy Hilfiger, Emilio Pucci and Lilly Pulitzer, in addition to having his own line.

“He’s helping us to move [the brand] forward,” said Chaiken. His influence will be felt in the spring collection. The line is produced in San Francisco, New York, Peru and China.

For spring, Paul Maffi photographed Chaiken’s look book for its retail customers and clients. Styled by Vanessa Traina, the book will be published in print and digital forms.

Chaiken, which has always been known for its great-fitting pants, is rounding out the line with knits, skirts, sweaters and dresses. “It’s not for a girly girl,” said Chaiken. “It’s sport inspired.” Spring’s wholesale prices range from $75 to $400.

For fall, Chaiken’s line is available at Knit Wit in Philadelphia; Wendy Foster in Santa Barbara, Calif.; The Store in Mill Valley, Calif., and Jamie Lyn in Beverly Hills. “The goal for spring 2013 is to take it to the next level,” said Vernon.

Chaiken noted that the redesigned Web site, chaikenclothing.com, will add e-commerce in the fourth quarter. They’ve also redone their Facebook page and their Tumblr account is active. The brand also has a YouTube channel.

“I’m really proud of what Julie has done in the past 10 months. A fantastic foundation is being laid to create a great contemporary brand,” said Vernon.