Is Slow Fashion the New Luxury?

If fast fashion defined the 2010s, slow fashion may be the marker of the new decade.

A piece from Agua by Agua Bendita's resort 2021 "Wallflowers Collection.”

Fashion, like trouser silhouettes, tends to change course once the pendulum swings too far in one direction. And if fast fashion defined the 2010s, slow fashion may be the marker of the new decade.

For years, the industry has pushed mass production and consumption at a clip so rapid that quick-turn, quick-churn fashion is now falling out of favor and making way for its more measured counterpart. COVID-19 has helped accelerate this redefinition of fashion — both luxury and at other price points — as clothing crafted with sustainability at the fore.

“The pandemic has helped foster a ‘buy less, buy better’ mentality with interest sparking in products with more value and longevity over disposable fast fashion. There has been a greater push on artisan products and items with a focus on craftsmanship, further backing the slow-fashion trend,” said Kayla Marci, market analyst at retail intelligence platform Edited. Creating exclusivity with handmade and made-to-order items is now “the ultimate luxury in the current state of mass production,” she added. “With so many new players trying to break into the market, brands with conscious and ethical products are poised to gain exposure and gel with younger consumers as they have an offer with more substance compared to traditional luxury brands.”

As defined, slow fashion is a movement toward thoughtful design, creation and consumption. It prioritizes product quality and longevity; considers minimizing waste of all kinds and maximizing social impact. It advocates for pumping the brakes on production for the sake of it, which, without an accurate sense of demand, often means more fodder for landfill.

In practice, slow fashion looks like what Agua by Agua Bendita is doing.

The luxury ready-to-wear brand founded in 2018 and produced by women artisans in Colombia, said in August — despite already putting out fewer collections than more mainstream luxury brands at just three a year — that it’s slowing its fashion cycle down even further.

“From this season onward, we will be working at a more organic pace for the sake of our creativity and, most importantly, to reduce our impact on the environment. We believe in creating pieces that can be worn and loved for years because of their timeless design and excellent quality. We want to create less, and create better,” Agua by Agua Bendita posted on its Instagram.

The move would appear bold in a fashion industry long beholden to bottom lines and retail’s constant need for newness, but it’s one the brand believes in and something buyers and shoppers alike will have to come around to. Now Agua will create just two collections a year, dividing them by drops.

“We found that collections were not living in the stores for long before they were on sale, and we didn’t find that sustainable,” Isabella Behrens, one of the brand’s creative directors, told WWD.

The aim is to have more time to create, a notion that has, in some cases, fallen by the wayside in fashion, luxury and otherwise, with a “more-faster” model in its place. And at Agua, the creation process is an intricate one. 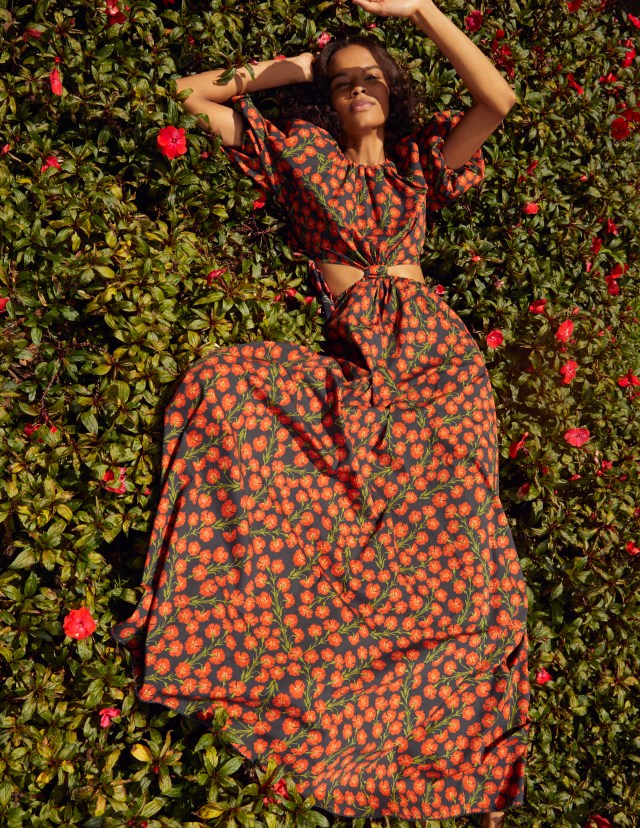 Concepts begin as a collaborative effort between the brand’s women-led leadership and a 700-strong collective of women artisans from vulnerable communities within and surrounding Medellin and the greater Antioquia region in Colombia. The artisans, part of Agua Bendita’s AB Hearts initiative, are empowered to turn their generations-old Colombian embroidery and beading techniques into their own small businesses, which means they are able to work from home to take care of their children and the households they are often heads of. Together, Agua and the leading artisans they employ distribute the work among local women. Prints are hand-painted in motifs that nod to Colombia’s culture and history, and pieces — which are largely made from linen and include embroidery or beadwork done by hand — are given to the collective of women that specializes in the type of detail work a design calls for.

Rushing the process of crafting each garment would come at a cost the brand isn’t willing to pay at the expense of its product.

“Our embroideries are quite intricate, our prints are developed internally so it takes a long time, and we found that we were also at a pace that it wasn’t sustainable to keep going and keep creating pieces that people wanted to buy and fall in love with,” said Cloclo Echavarria, the brand’s co-creative director. “We want to create less pieces and have people love them for longer, and we want to work with retailers to have a specific markdown strategy and not have our pieces be marked down at 70 percent off because it doesn’t reflect their value.”

That value extends beyond the quality of the product to Agua’s environmental impact and its efforts to minimize the label’s footprint. Only natural fibers go into rtw creations, which are digitally printed to save water and waste that would come from traditional dyeing techniques. All swimwear is made of recycled polyester from discarded plastic bottles, and then sublimation printed with water-based inks. Social impact is also part of Agua’s efforts, as it works to share value with the artisans in its supply chain. It’s a consciousness today’s consumers want from the brands they buy from.

“We have to work consciously. We are working with people, they are not machines,” said Catalina Alvarez, who founded the original swimwear-focused Agua Bendita brand with Mariana Hinestroza in 2003 before launching the luxury label. “The value that they give to every single piece, I think the consumer will value that. It’s a family behind that piece of clothing.”

Slow, considerate fashion may be one trend that shows staying power.

In its 2020 Conscious Fashion Report released in April, global fashion search platform Lyst said that over the 12 months leading up to the report, the term “slow fashion” generated more than 90 million social impressions, suggesting what it called “the beginning of a shift in shopping behaviors.” 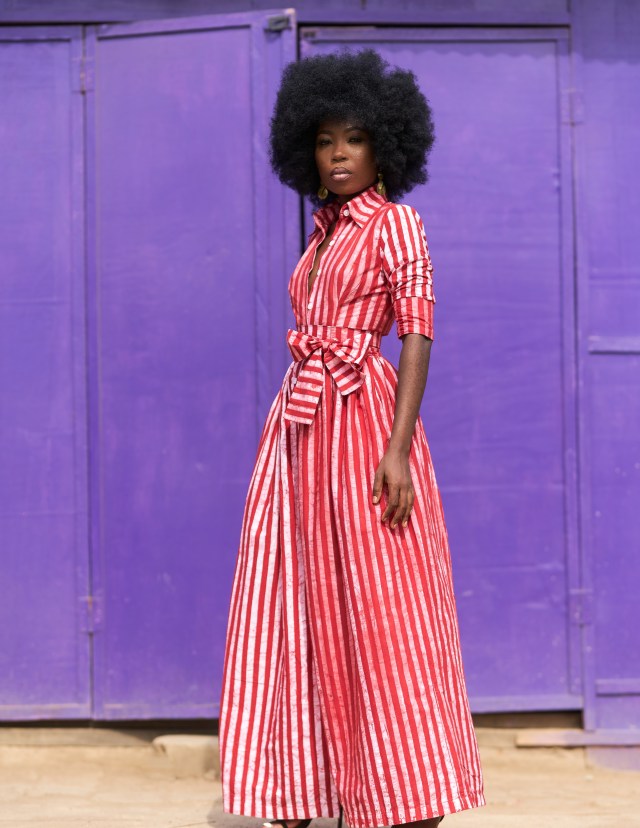 Another brand poised to continue picking up from that shift is Sika.

Founded and created by London-based Ghanaian designer Phyllis Taylor, the line of batik print-focused rtw is hand made and made to order in Ghana. And Taylor, it seems, may have been onto the slow-fashion movement before it had a name.

What began out of necessity after realizing the challenge of constantly pushing out new pieces for a collection alongside her other endeavors ultimately just became smart business for Taylor. She opted out of following fashion’s seasonal cycle altogether, and simultaneously refused to sign onto its ongoing excess inventory conundrum.

“I always had the luxury of being able to have a one on one with my customers…every customer is different and you can’t be sure that because you believe this color is going to work when you’re in the production process…that it’s going to translate a few weeks down the line, a few months down the line when you start producing hundreds of them,” Taylor said.

She started producing a handful of pieces at a time, seeing how they sold across her three shops in London, and then ordering more accordingly. When she moved to an online-only model, Taylor didn’t make anything before the consumer ordered at all. “I realized that the production team could just make as I take the order and there was no point in me just having them make 15 of these dresses and putting it out there just in case there’s 15 people in the world over the year that might decide on that particular style.…Also, I just don’t like the idea of having loads and loads of something.”

At Sika, there’s zero waste as well as the added luxury of having something made to order and created in a way that means no two pieces will ever be quite the same.

First, Taylor works with artisan batik-makers in Accra, Ghana, to develop the fabric designs and color schemes. The wax-resistant dyed cotton fabrics then dry on the lawn and the sun determines the ultimate color, which means the weather lends each piece its own uniqueness. The process continues from there entirely without the use of machines: the fabric is hand cut and each garment is then individually sewn.

The artisans who make Sika’s designs also earn a living wage, as do most making garments in Ghana, where instances of forced labor aren’t a part of the culture as they can be in other places that produce the world’s fashion.

“Sometimes I do think our dark history of slavery makes it just not something we do,” Taylor said of forced labor. “You don’t see people working and getting paid pittance, you don’t see children sewing anything.”

In June, when the Black Lives Matter movement suddenly drew new attention to Black-owned brands that were already making contributions of note, the uptick in Sika’s orders prompted a message on its site alerting consumers that it would take up to five weeks for their items to ship (typically, this is a 10- to 14-day process). But they ordered anyway. And they waited. In a week’s time, Sika gained 35,000 followers on Instagram.

“Companies like Amazon and some other companies that you buy today and in the evening it’s in your house have spoilt some people and they think that’s just normal — that’s just not normal. I just think there’s something special about the creation process of having someone take the time to make something special for you,” Taylor said. “I think the whole throwaway culture, it’s getting a bit played out now.”

Though slow fashion may take time to work its way through some consumers’ systems, artisan luxury brands will likely lead the charge for the change.

“Fashion has a bad reputation, but the way we see it and the way we live it, it can actually have such a big effect…such a positive impact,” Echavarria said.

As Behrens added, “It’s about being something bigger than fashion.”