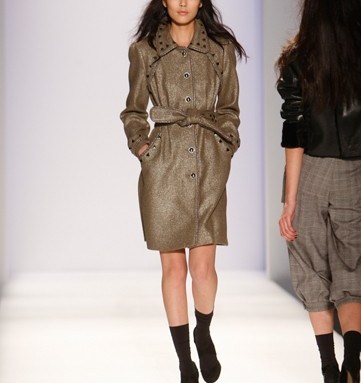 NEW YORK — How long can the little guy last?

As department and specialty stores react to the recession by trimming the number of collections they carry, demanding lower prices or asking for more markdown money, the small, quirky, edgy or underground designers these retailers used to fight over and flaunt are getting squeezed. Gone, at least for now, are the days when a store was willing to carry a line because of the buzz it generated — now the bucks are all that matters.

The fall ready-to-wear shows just concluded were the first to take place in the depths of the downturn and, as such, represent a last hurrah of sorts for many. Industry executives predict that, come the spring 2010 shows in September and October, there will be fewer designer brands out there as the economic shakeout takes hold.

“It’s just a different world than it was in September,” said Josie Natori. “It’s like they say, ‘Minus 30 percent is the new flat.’”

Long-established labels like Natori should be relatively safe even in the recession, but experts agree that even brands with sales of $50 million or more might suddenly find themselves with much smaller markets. Compounding the pressure on American designers is that in this climate, there is no magic number in terms of sales or investment that would guarantee their success — presuming their cash flow hasn’t already been strangulated.

“It’s a difficult period for young designers,” said Marvin Traub, whose TSM Capital invests in small firms like Rachel Roy and Matthew Williamson. Traub declined to identify any vulnerable small companies, but said, “It’s difficult with most stores, particularly in the designer business, having to cut their budgets. As they cut their budgets, they certainly want to preserve their relationships with long-standing designers. It’s difficult for new and struggling designers to get noticed.”

Kim Vernon, president and chief executive officer of the Vernon Co. consultancy, agreed the next six to 12 months will be critical. “It will be a trickle of companies that either disappear, have a complete pause or reinvent themselves as an entirely different entity.”

“There were so many designers and houses that had a difficult time even in the best of times, that in these difficult times, it will be hard if not impossible for some,” said Robert Burke, founder of the Robert Burke Associates consultancy. Several smaller businesses will likely disappear over the next six months to a year, and narrowly priced rtw in stores’ competitive designer departments will be the most challenged, he said, although he believes designers such as Alexander Wang, Phillip Lim and Richard Chai could end the season with increases.

His survival tips include broadening existing prices, sourcing outside of the U.S. and Europe and considering secondary lines, as Doo-Ri Chung has done successfully with Under.Ligne, being open to collaborations and possibly working as creative directors on other lines “will also be necessary for them to survive.”

• Consultancy gigs for a secondary income.

• Negotiating payment plans with individual stores to avoid being cash-strapped at the end of a season.

So how many seasons can struggling designers support their businesses before they have to call it quits? Paris-based consultant Richard Morgan said brands should aspire to 10 million euros, or $13.6 million at current exchange rates, in wholesale volume to survive. Steady progression over four seasons is essential, and designers must be proven players where they are based before venturing overseas, he said.

Others weren’t so sure. “I don’t know that there is a dollar amount in this tough environment, whether you are a new vendor or an existing vendor,” said Stephen I. Sadove, chief executive officer of Saks Inc., which is among those pressuring designers in the U.S. and Europe for lower prices and reducing its vendor base. “Two million in sales in one channel is very different than two million in another. Designers need to be doing what they need to do to make sure they are ready to get to work once this recession ends.”

Haresh Tharani, whose Tharanco Group’s portfolio includes Doo-Ri Chung and Poleci among other labels, said personal attention will cement a designer’s success. “More than financial backing, designers need more mentoring. Working with the customer and working with the retailer is definitely more important than just having your product on the sales floor,” he said.

Media interviews, celebrity dressing, TV cameos and Facebook profiles only go so far. Designers need to have a real passion for connecting with consumers one-on-one. Tharani said, “The one thing required in business today is to get designers to understand the customer through trunk shows or personal appearances. There is a whole reversal that involves going back to how business was done 30 years ago. ”

Stores like Neiman Marcus and Saks Fifth Avenue are downsizing their vendor matrix, scrutinizing each brand’s fate and requesting sharper prices. And it isn’t only U.S. retailers scaling back; international stores also are revising their vendor mix. Having already pared down her designer base by choice or due to their demise, Averyl Oates, buying director for Harvey Nichols, London, said, “We will see designers fold, regrettably — we have already noticed this happening.”

Earlier this month Neiman Marcus Inc. chief executive officer Burt Tansky spoke of plans to pursue a “much more conservative buying plan” for fall and to offer more sharper-priced goods. As a result, U.S. store buyers said they were pressuring designers in Milan and Paris to cut their prices by up to 20 percent — and were in turn trimming their open-to-buys by up to 30 percent because of the recession.

Another worry for many small businesses is stores not paying in a timely manner — a delay that can quickly set off a domino effect with detrimental results. Benjamin Channing Clyburn, who designs the contemporary Bensoni line with Sonia Yoon, said, “It is somewhat of a concern that it’s become more difficult to collect money even from your best vendors. Everyone is having a difficult time in cash flow. We have to advance factory money for them to release our goods. It’s a cycle. But we have been working with vendors as best as we can, with payment plans and other alternatives to help them ease the cash flow.”

The design duo has made several operational adjustments that could help them through this climate, including bringing sales in-house from a multiline showroom.

But some designers remain more idealistic, preferring to focus on what they do best and staying true to what inspired them to get into this business in the first place.

Twenty-five years into her career, Isabel Toledo, who wholesales 500 to 700 units a season, doesn’t sweat the numbers. Despite her limited — albeit covetable — account base, which includes Ikram and Barneys New York, she scored major league publicity when Michelle Obama wore a Toledo-designed ensemble for her husband’s swearing-in ceremony. “Happiness is the secret of longevity and never really feeling like you’ve made it,” Toledo said. “I work totally instinctively. That’s not a secret. There is no financial magic number. I go into it one season at a time.”

Jason Wu, Obama’s go-to designer for her inaugural gown, said his new-found fame doubled sales compared with last season — although they are minimal compared with a major house, with expected volume of $4 million to $5 million at wholesale this year. Like Toledo, he said he is not working toward any sort of magic sales number for greater financial stability. “My goal is to be as concentrated as possible and to remain very focused,” he said. Rather than stretch out into new categories, sign licensing deals or open a freestanding store, he said he is focusing on his own strengths — so much so that he decided to nix a fur deal after the inauguration. “There is so much [merchandise] in the industry already. I want to remain committed to why I created my business,” he said. “In this business, the single most important thing is brand recognition. It helps to make a brand stronger and to build a business.”

Anna Sui, this year’s winner of the CFDA Geoffrey Beene Lifetime Achievement Award, said maintaining a strong identity across various business endeavors is more essential than ever in these challenging fiscal times. With estimated annual sales of $20 million at wholesale, the designer has 14 global fragrance and cosmetics licenses and a 42-store franchise in China, Japan, Taiwan and Kuwait that boosts that amount substantially on a global basis. The fact that she is independent and maintains domestic production allow her to be more flexible and responsive, she said. “I went global 10 years ago,” Sui said. “Just the fact that I have a strong identity throughout [her global enterprises] has helped me get through all this.”

And then there is the growing trend of outside collaborations, sometimes yielding odd-couple type pairings. Five-year-old Verrier struck a year-long partnership with Viactiv calcium chews, which sponsored the label’s runway show last month. Designer Ashleigh Verrier also recently partnered with home furnishings company MacKenzie-Childs, and last month designed the company’s 57th Street window displays, integrating some of her spring clothes. Inside, the store also featured vignettes from her spring collection. Verrier said it has proven an effective marketing and sales tool: as a result of the partnership, she received 50 calls about the clothes.

With a licensing partner in Itokin for Japan, where she has 15 shop-in-shops in department stores like Takashimaya and Isetan, she plans to open a Verrier flagship shop-in-shop in Omotesando Hills in Ayoma. Today, she said she is able to continue her U.S. business because of her Japanese sales.

“In this state of the economy, you have to be very creative and think of different ways to continue to get your name out there, and be smart about whom you align with,” Verrier said.