The 78-year-old brand, best known for its boat shoes, signed a license with LF USA to create the collection about six months ago. 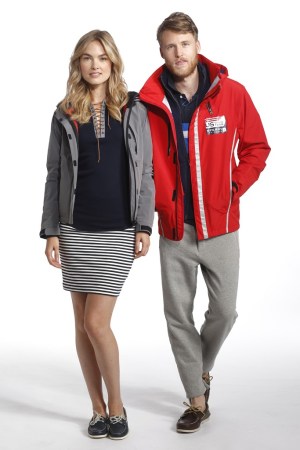 Sperry Top-Sider is ready to dive headlong into the apparel business.

The 78-year-old brand, best known for its boat shoes, has turned to LF USA to launch a men’s and women’s lifestyle collection for fall. The collection will be unveiled to retailers at an event in New York on Thursday.

Sperry, which last May was acquired by Wolverine World Wide Inc. along with a number of sister brands formerly owned by Collective Brands Inc. for $2 billion, was founded by Paul Sperry in 1935. As the story goes, Sperry, a former naval officer and avid outdoorsman and sailor, watched his cocker spaniel Prince run across a frozen New England pond without slipping. He used the tiny grooves in the dog’s paws as inspiration to create what it billed as the world’s first boat shoe, the Sperry Top-Sider Authentic Original. That heritage and love of the sea still permeates the brand and will continue to be the signature of the label, according to Craig Rheingold, president of Sperry.

“It’s authentic and iconic with a rich history,” he said.

Over the past several years, the brand has branched into categories including swimwear, hats, gloves, scarves, sunglasses, socks and hosiery. “We envision it as a lifestyle brand, but we need apparel to complete the package and bring the brand to life,” Rheingold said.

Sperry signed a license with LF USA about six months ago.

Paul Raffin, Group President LF USA Men’s/Kids, stressed that although the styling of the brand will center around nautical references, the label will also include “true performance” features. It is the technical aspects of the line that will separate it from competitors such as Nautica, Vineyard Vines and other brands that are aligned with the ocean or sailing.

He expects the line to be a $100 million business at wholesale.

“We believe the heritage brand movement coursing through the market for the past six or seven years needs to evolve,” Raffin said. “Sperry Top-Sider has a heritage and a sense of real adventure but it’s also product that performs.”

Sperry is the official sponsor and outfits the U.S. Sailing Team and that product was used as inspiration for the LF USA collection. Raffin said he is “very respectful of the other preppy, traditional brands with nautical and seaside inspiration, but ours is a more-engineered approach. We want to be disruptive and break through with a line that is differentiated. Yes, there are preppy cues, but we’re infusing it with innovation.”

Although the line will feature seamed seals, SPF 50 sun protection on knits, water-repellent finishes on fabrics, breathable membranes, zippers that won’t scratch boats and other performance features, it’s also designed with a modern sense of style. “We think there’s a tremendous white space in the market for that,” Raffin said. “We’re calling it Life Gear — we didn’t want just another commoditized, preppy brand.”

Dawn Brandl, vice president of design for the collection, said most competitors are “either sportswear or true performance,” but the Sperry collection offers both. The collection is “rooted in America” and will include tri-layer waterproof breathable sailing jackets; classic peacoats in canvas, wool and nylon; Breton stripes in dresses and shirts; bonded fleece outerwear; washed cargos, and sweaters. Blue will be a pillar of the line but there will be pops of color infused into the collection as well, Brandl said.

There will also be a luxe component, she added, including cashmere cable knits, wool yacht club blazers, waterproof toggle coats for men and silk tops rooted in nautical patterns for women. Rheingold said Sperry also offers elevated price points in footwear in a collection called the Gold Cup Collection, which sells for $200 and up. But the “sweet spot” for the footwear is $80 to $150.

The brand will be evenly split between men’s and women’s wear. “Our long-range strategic plan was to build women’s,” Rheingold said, noting that women’s merchandise is now a slightly larger amount of the total, or around 51 percent to 49 percent. “Down the road, we see women’s as 60 percent of the business.”

Putting more of an emphasis on fall has also been a focus. Traditionally seen as a brand best suited for the warm weather months, Sperry’s business is now split evenly between spring and fall with sandals and drivers selling as well as cold-weather boots. Non-boat shoes are also gaining in importance. “That tells us the consumer loves the brand for its lifestyle,” Rheingold said.

The collection will be targeted to better department and specialty stores as well as traditional Sperry customers such as West Marine, Raffin said. It will also be carried in Sperry’s own stores — the company currently has 52 in the U.S. and 40 overseas — as well as through e-commerce companies.