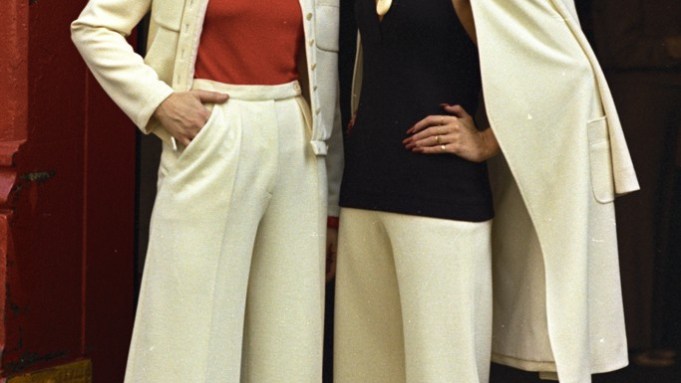 But before the mid-20th century, U.S. apparel firms mostly copied French styles for the American market. The war years made communication with Europe difficult, and Americans began to appreciate their homegrown talent. As women started enjoying leisure activities in the early to mid-20th century, American designers developed sportswear to meet their needs, and that demand has continued well into the 21st century, with American sportswear becoming a global phenomenon.

From the onset, sportswear was comprised of coordinated separates that could be easily mixed and matched, such as blouses and shirts worn with skirts or shorts. It was created to cater to the needs of American women whose lives were becoming increasingly fast-paced. It also became the dress of the American middle class. In the Forties and Fifties, people began moving from the cities to the suburbs, and that caused major changes in dress, with casual sportswear becoming more popular, according to “All-American: A Sportswear Tradition” (Fashion Institute of Technology, 1985). California also became well known for its comfortable, outdoor lifestyle which required a more relaxed, laid-back wardrobe. As women became active participants in sports such as golf, tennis and swimming, a casual sportswear wardrobe became a necessity. Sportswear was designed in comfortable fabrics that were easy to care for.

Many of the first American sportswear designers were women, who understood women’s needs and lifestyles. Dorothy Shaver, president of Lord & Taylor, in the Thirties and Forties started to support American designers such as Claire McCardell, Bonnie Cashin and Vera Maxwell, all of whom were first showcased in L&T’s boutiques and Fifth Avenue windows.  In the Forties, McCardell popularized a new way of dressing that included the dirndl skirt. She was well known for her swimsuits, sundresses, wool jersey dinner dresses and “Popovers,” denim wraparound housedresses.

In 1966, a 16-year-old British model named Twiggy made an impact on both sides of the pond with her miniskirts, and the look skyrocketed. Betsey Johnson made a name for herself as an innovator, and designed T-shirt dresses, pantsuits and miniskirts, starting in the Sixties. At that time, sportswear began taking on a unisex look, with blue jeans, bell-bottoms, T-shirts and denim jackets becoming fashion statements. Blue jeans, which had a rebellious attitude, moved from the fringe to wider acceptance and were worn by antiwar protesters.

The late Sixties and Seventies also saw the rise of the American sportswear designer as a lifestyle brand. Anne Klein, an iconic sportswear brand which catered to women who were attaining more senior jobs and didn’t want to look like men, created power suits. In 1968, Calvin Klein began producing elegant, simple clothes, favoring neural earth tones and natural fabrics. He became one of the most famous designers in the world with his clean, all-American sportswear. Ralph Lauren created a rarefied world, beginning with his men’s wear and later expanding into women’s apparel, known for its luxurious fabrics and timeless elegance.

In the Sixties and Seventies, Bill Blass, Geoffrey Beene and Halston were prominent in the market. Blass designed sharp, wearable clothes that could be worn day into night. Halston created pantsuits, sweater sets, knitwear and formfitting dresses, and Beene was known for his impeccable tailoring and eveningwear. In 1973, the T-shirt became the number-one counterculture status symbol around the world. HotPants also hit fast and furiously. They first appeared in Europe in 1970 and spread to America the next year. In the Seventies, fashion still had a hippie hangover from the Sixties, defined by ethnic and retro influences. Feminists, who resisted restricted clothing, threw out their bras, and pantsuits became popular, blurring the lines between women and men. Pants went from bell-bottoms in the early Seventies to skintight, tapered styles.

In 1976, Perry Ellis presented his first collection under his own name and scored a home run with his clean-cut, all-American look. He showed oversize jackets, hand-knitted sweaters and baggy pants in natural colors and fabrics, which provided a fresh approach to sportswear. WilliWear also became a popular casual sportswear label.

By the late Seventies and Eighties, women started entering the workforce in droves. This resulted in the predominance of the power suit and day-to-evening dressing. For those working 9 to 5, the fashion industry created a whole new market, called bridge, with companies such as Anne Klein II at the forefront, and then Ellen Tracy eventually dominating the category. In 1976, Liz Claiborne cofounded a sportswear company that catered to the growing legions of women entering the workforce. Liz Claiborne Inc. became one of the most successful apparel firms in the world, providing stylish, colorful and affordable sportswear for working women and their leisure activities. Firms such as Evan Picone and Jones New York also addressed the needs of the working woman at affordable price points.

Mainstream consumers got their first taste of designer labels when the designer jeans craze took off in the Seventies. Calvin Klein, Gloria Vanderbilt, Bill Blass, Sasson, Jordache and Sergio Valente led the denim revolution, knocking traditional brands out of the spotlight. In the Seventies, many women skirted the hemline issue (long or short) by turning to pants. Pants became an acceptable fashion trend for the office. In the Eighties, minimalist designers such as Michael Kors garnered attention with clothes that were not fussy and were strong in shape and line. Marc Jacobs brought grunge to the market when he designed for Perry Ellis, which became one of the influential statements of the Nineties, in large part for the negative reaction it elicited. Isaac Mizrahi also made his debut in 1988 and offered up lively, colorful sportswear. A fitness craze swept the country in the Eighties, and activewear as streetwear became prevalent. Americans spent billions of dollars on sportswear for working out. Sportswear with Lycra spandex became a popular option, both for participatory and spectator purposes.

Throughout the Nineties, designers such as Donna Karan, Ralph Lauren, Calvin Klein and Tommy Hilfiger each brought their own sensibility to the sportswear market, and became global lifestyle brands and giant licensing machines. Supermodels showed off the clothes on the runway, creating images that went global. The designers also launched diffusion lines (i.e., DKNY, ck Calvin Klein, Lauren Ralph Lauren, for example), and a slew of other categories, as part of the megabrand phenomenon.

The late Nineties saw a casualization of the workplace. The Nineties were also dominated by hip-hop fashion, which consisted of baggy pants, baseball caps worn backwards, oversize rugby or polo shirts and expensive sneakers.

In the 21st century, sportswear encompasses casual streetwear and dressy looks, with jeans continuing to play a key role. Celebrities got into the sportswear game, with well-known celebrities such as Mary-Kate and Ashley Olsen, Gwen Stefani and Jessica Simpson all creating followings for their sportswear lines. A new generation of designers such as Tory Burch, Phillip Lim, Proenza Schouler, Peter Som, Alexander Wang and Derek Lam keep American sportswear thriving.