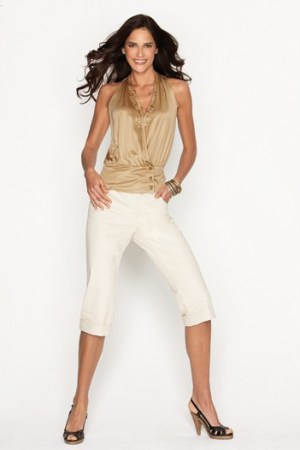 The retailer will test D.R. by David Rodriguez in a total of 100 units of Bealls, Stage and Palais Royal stores in the Southwest, said Kim Bell, Stage Stores marketing manager. The line could eventually be rolled out to the company’s 747 stores in 39 states if it performs well, she said.

“I’m looking at this as the beginning of a foundation that could grow into other categories,” Rodriguez said. “We found the right retail partner to get behind it, and I love having the ability to speak to a much larger audience.”

The item-driven line features proprietary prints and is sized up to 16. Its summer delivery offers slim cropped pants, ruffled blouses and city shorts, and fall is made of lightweight fabrics suited to the region.

“Every piece except one is under $45, so it allows us to bring true designer fashion to normal average women,” Bell said. “Designer partnerships are something we want to develop further. The designers make far more through collaborations like this than through couture.”