The trade show attracted a smaller group than usual. 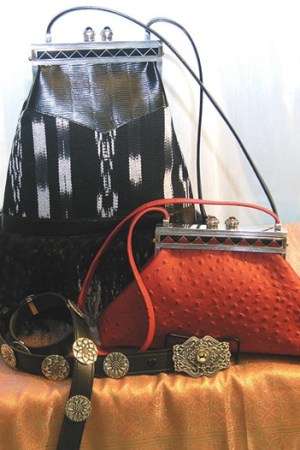 NEW YORK — The Atelier Designers trade show, which ran from May 3 to 5, attracted a smaller group of exhibitors and retailers than usual for the May market, but according to show director Susan Summa, that was to be expected.

“We’ve had a steady flow of stores, but it has been slower than in the past,” she admitted. “Of course in this economy, we saw this coming.”

Summa said many of the retailers she spoke with at the show were interested in picking up items, rather than writing full ensembles from exhibitors. One retailer, Lori Ruda of Lena’s of Hagerstown, in Maryland, said that since a popular store across the street from her, Figurehead II, went out of business a few months ago, she is hoping to upgrade her mix of merchandise to attract customers who used to shop at that store.

“We used to be the store for grandmothers, but now I’m hoping to get the mother-daughters to come in,” said Ruda, noting she picked up some more contemporary looking items at the exhibition from Cynthia Ashby, sweaters from Giselle Shepatin Inc. and a few bags at Moulin Rouge. “I’m looking for items for fall since I have too much inventory in the store right now. But with the new dynamic we are adding, we have been editing out a lot of what we used to have and looking at bringing in a wider range of items.”

Chris Warren, an assistant buyer at the New York-based Marjorie Warren The Studio store on Madison Avenue, said she found some casual items at Amy Brill and loves the sweaters at Carole Tomkins Collections.
“Business is actually getting better. We are seeing it happen,” she said. “I’m here mostly looking for items to fill in what we’ve already ordered. Women have to buy clothes eventually.”

On the exhibitor end, 43 designers were spread over three floors at the Doubletree Hotel in Times Square. In the Moulin Rouge suite, designer Michel Marzano of Kitty Hawk, N.C., showed his newest collections of handmade handbags and belts. He said the navy embossed leather bag was selling well, as was the ikat print canvas bag with Mongolian lamb fur trim. He was also seeing a lot of interest in his new belt collection. The Moulin Rouge collection wholesales between $150 and $350.

At Barbara de Jounge and Bodil, two contemporary knitwear and sportswear brands, Neeta Malik, a sales representative from the Los Angeles-based firms, said business was starting to pick up.

“Buyers have been cautious, but we really see a turnaround happening,” Malik said. “Our lines are also made in the U.S.A., which has been a great selling feature for us.”

Malik said retailers are also gravitating toward colorful items for a “pick-me-up in bad times.” The Barbara de Jounge collection wholesales between $39 and $195.

Nina Ganci, designer of the St. Louis-based Skif International, said she was doing well with her hand-painted knit sweaters in colors like tan and black and pink and red. Her line of casual contemporary sweaters wholesales between $70 and $185.

“This is always a great show for us and it’s been great this time too,” she said. “I’m finding that a lot of people are liking some of my original designs, so I’m bringing back a lot of what I used to do in the Nineties.”