Stella McCartney has built — and expanded — her brand on her set of firm principles. 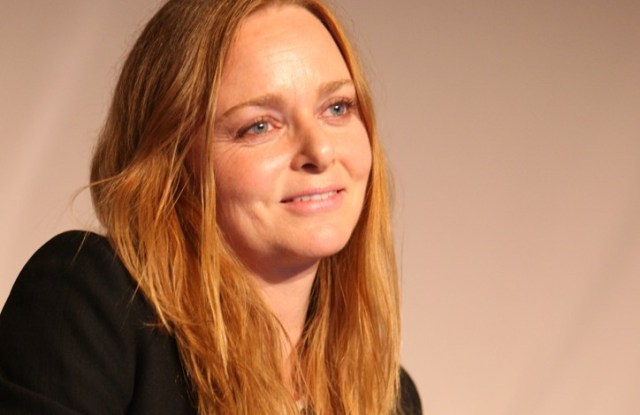 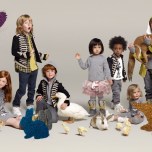 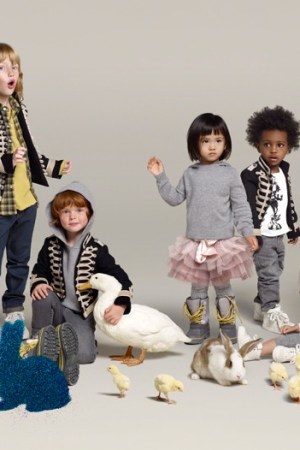 A shot from the campaign for Stella McCartney’s first children’s collections for GapKids and babyGap.

Calling herself “an infiltrator” in the world of fashion, Stella McCartney, in a wide-ranging Q&A that touched on topics from her adherence to animal-free production to the decision process behind her corporate collaborations, offered insight into the challenges facing a nascent luxury brand.

The designer initially disputed the notion the economic crisis has had a negative impact on her work, calling it “creatively empowering,” while noting that being a relatively small company has its advantages in tough times. “I feel very much like it’s made me have to challenge myself as a designer and have to push myself and do a better job, and not take things for granted and not take the easy way out,” McCartney said. “But, you know, we’re a very agile company…and we run a pretty tight ship anyway. It’s obviously a very difficult time for everybody, but in our business, it’s been strangely — we’re OK.”

Pressed on how precisely she has approached her work since luxury spending took a nosedive, McCartney explained she sees every garment individually, rather than as an outfit, and therefore stays detail oriented. “I’m also very aware that I work for the customer, and I think that’s very important at times like this, to not try to elevate yourself above the person who’s going to pay your wage,” she said. “I think that I’m the customer, and I really admire people who go out and earn money and part with their own hard-earned money for our products.”

Despite her intensely private persona, the designer — who has three children with her husband, entrepreneur Alasdhair Willis — veered away from business talk at times. Her kids, she pointed out, were a primary reason in deciding to collaborate with Gap on her recent babyGap and GapKids lines: “I just couldn’t buy anymore kids’ clothes, to be honest. I couldn’t be bothered.”

As for social media, McCartney noted her company participates in it, but she views it as “fluff. It’s not our bread and butter.” The designer has little time: “I have a lot going on.…I also think there’s merit to some things being left to the imagination.”

McCartney also admitted that only recently has she felt entirely comfortable with her career choice — “I was a bit embarrassed by the word ‘fashion’” — and that part of her adjustment has been dependent on sticking to her ideological as well as aesthetic guns. “I’m one of the school of designers that tries to do timeless pieces, pieces that will stay with you forever. It’s important to have things that you can fall back on in your wardrobe,” she said. Perhaps recognizing her designs have at times hewed to a more experimental customer as well, McCartney added: “It’s important to be ridiculous in fashion occasionally.”

Yet it is her commitment to “responsible luxury” — which McCartney said grew out of the way her parents, Sir Paul McCartney and the late Linda McCartney, raised her, on a rural farm in England — that has proven to be the biggest challenge in her work. Prior to joining Gucci Group in 2001, McCartney said she was approached by Tom Ford, then the company’s creative director, who was interested in McCartney becoming part of the company.

“I said, ‘Great. OK.’ I was really into it. He said, ‘We’re not going to do fur for you, Stella; we’re gonna give up fur,’ and I thought, that’s amazing. And I told him, ‘Well, you do know I don’t do leather, either,’ and his face just went white and his jaw dropped to the ground.”

Nonetheless, Gucci Group approached her later and asked to invest in her company, and she now jointly owns it with Gucci. Still, McCartney said her standards have resulted in financial roadblocks. “I’m working with Italian factories that have been doing leather for years,” she said (those factory owners think she’s “less crazy” given her sell-through rate, McCartney noted dryly). “It costs us up to 70 percent more to make a pair of shoes than any other brand — we take that on the chin; we don’t mark it up for the customer. Coming into the States, we have nearly a 30 percent import duty for nonleather goods, which I think of as kind of medieval.”  She added that about 50 million animals are killed each year to produce leather handbags and shoes, “which I’m sure nobody in this room wants to hear, but it’s kind of a fact.”

Given her well-known stance on the practice of using animals in fashion, McCartney said she remains committed to the expectations of Gucci Group — namely, creating luxury goods. “If my job first and foremost is to create luxurious, desirable, gorgeous items, and that is my job, and if that piece has to be sacrificed so much to the extent that it is no longer luxurious and desirable, then I will make the decision to probably not go with the organic fabric,” she said.

And though McCartney declined to suggest leather be abolished from fashion — “That would be a ridiculous thing to say!” — she noted the slow move toward sustainable practices has frustrated her (she said even her London offices are solar- and wind-powered). “That’s what I mean when the fashion industry can be a little unfashionable at times,” the designer added. “All other industries are having to think about how to push themselves.”

Yet McCartney is disinterested in being known as an eco-friendly brand. She said she is happiest when customers don’t realize her products are animal free, and that the blitz of corporate collaborations she has undertaken since linking with Adidas six years ago have been specifically chosen, in part, to expand her brand recognition. H&M, Adidas, a skin care line called Care with YSL Beauté and the Gap collections (as well as a LeSportsac capsule line) each have applied the McCartney name to brands with a wider audience than straightforward luxury offers, she explained.

“We really did it to have people get more access to the brand at a more affordable price point,” she said of the H&M deal. “I think the main thing for me when we get asked to do stuff is to really choose things from the heart. I don’t like to be hypocritical, just as a person.” McCartney couldn’t escape the question of how, particularly in this era of celebrity-saturated fashion, she copes with that famous last name, as well as the lingering whispers her name has offered significant tailwind for her ascent.

“It is what it is. At the end of the day, though, I don’t think it really matters,” she said. “I think staying power is the key. You’ve got to work your ass off. And you’ve got to be relatively good at something, I think, to go the distance.”

Which is not to imply she’s unaware of the trend in famous offspring entering the business. “I do joke with my celebrity friends, ‘Everybody is a designer,’ and I do joke, ‘Don’t you try it! Don’t you step on my toes!’”

McCartney emphasized her own well-known mother, who died in 1998, represents the look she has tried to convey since her first collection at Central Saint Martins in 1995. “It was an attitude. I always say that our brand is naturally sexy and naturally confident and modern, and the natural word is very important to us,” said McCartney, who wears little makeup and noted her mother eschewed it as well. “At the same time, you know, I was hugely influenced by my dad’s Savile Row suits,” McCartney said.

So much so that she took tailoring lessons in the evenings from a Savile Row designer while still in school. Thereafter, McCartney said, she even dabbled in editorial at Vogue (“I knew I didn’t want to do that”) as well as public relations (“I knew I definitely didn’t want to do that”). Indeed, with her talk being live streamed to fashion students, McCartney said that beyond her number-one credo — hard work — adaptability is key to doing well in what she called “a fickle business.”

“You have to believe in yourself, you have to be talented and if you don’t think you’re in the right area of the industry, don’t be afraid to change directions,” she said. Regarding her own penchant for following her gut when it comes to collaborations, McCartney remarked that a certain humility is valuable, too: “I would say hardly anyone knows of Stella McCartney, really. I once got told by a friend of mine that nobody else really cares as much as you do about yourself.”

As for a perennial question — whether she will design men’s wear, given that Savile Row background — McCartney told the audience she is considering it, increasingly since so many people seem to inquire about it. “I’ve always said I don’t want to be a huge brand, but as time goes by, we’re sort of slowly moving…,” McCartney trailed off. “I’d like it to build, build brick on brick. I think that I would like the brand to still be here in the future. I would like it to build on the foundations we have now, the same belief system. I want to build a strong, dedicated clientele of women who really love the brand.”