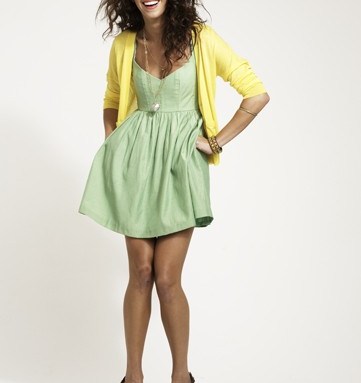 After a tough holiday season, retailers had immediate business on their minds as they shopped the aisles of Intermezzo at the Jacob K. Javits Convention Center in New York Monday to Wednesday.

“For me, this has been a pretty good show,” said Michele DiMarco, owner of Lilac and Lilies, a contemporary boutique opening in Lauderdale by the Sea, Fla., in mid-April. Her Web site, lilacandlilies.com, will launch March 1. “As a new business, I think I will be able to grow as the economy gets back on track. Also, I’m finding that exhibitors are much more open to talking with me now. When I walked this show a year ago, when I was just trying to feel things out in the market, they weren’t giving me the time of day.”

DiMarco said she was mostly writing orders at this show to fill in the voids, as she already has done most of her summer ordering. Her store and the site will offer an array of items from brands such as Rebecca Taylor, Ali Ro and Black Halo.

“I’m really on the lookout for some emerging designers, since I want to be able to differentiate my store from the rest,” she said.

“It’s so sad; I honestly don’t know what I’m going to do,” she said. “I have a large open-to-buy and I’m not finding much of anything here. I was expecting to be able to get more immediates, but am surprised that these vendors have so much for summer. I’m not thinking about those deliveries now. I can’t think that far ahead. These vendors need to be more in touch with what the consumers want now.”

With that said, Pecor said she did find some good accessories as well as immediates at Rebecca Taylor, AG and Joie.

“I’m worried and getting desperate and that’s not good,” she said.

Randi Siegal, owner of Rapunzel’s Closet stores in Palm Beach, Fla., and shoprapunzels.com, said she was disappointed with a lot of what exhibitors were offering.

“We are a bit shocked that the summer colors are pretty dark [olives, purples],” she said. “We thought it would have been brighter and punchier. Also, a few brands offered discounts if you leave your orders at the show, [but] we expected to see more vendors discounting, offering free shipping or lowering their minimums.”

While Intermezzo, which is typically held at the Show Piers, was slightly smaller than last January’s version (when there were 501 exhibitors), there were still 453 booths on display. ENK International executives said they had no issues filling the space at the Javits Center, saying that they couldn’t possibly fit any more booths.

For Just Johnson, a brand that closed about one year ago in Los Angeles and reopened in New York, the show was a good one.

“We’re happy with the traffic and feel like we have to be here, especially in hard times,” said Samantha Schwartz, a sales representative at the New York-based L’Atelier showroom, which took on Just Johnson and also carries the Milly, Splendid and Ella Moss brands. “Overall, we are finding that our stores are interested in newness, but are also being very conservative in their buying.”

Just Johnson, which was founded in 2005 by celebrity stylist Kristen Johnson, was doing well with its signature shorts styles in men’s wear fabrics as well as cotton canvas and silk. Also booking were the sequin tanks and plaid cuffed-sleeve tops. The line, which already has been picked up by Barneys New York and Shopbop.com, wholesales between $59 and $115. Johnson, the brand’s creative director, said she expects to reach about $1 million in first-year sales at wholesale.

“We want to make sure we are in all the right stores, and now that we have all the resources in place that we need to grow, we are able to do that,” she said.

Also new to the show was Storee, a Los Angeles-based line of printed silk dresses and tops. Paul Yi, the brand’s sales manager, said he sees the collection doing well so far since stores are looking for new brands to entice shoppers. Yi said the price points are low for the contemporary market, ranging from $48 to $110, which also has been a good selling point.

Across from Storee was Primp, where retailers browsed through the newly expanded line of jersey basic tops and dresses, as well as the brand’s signature printed T-shirts, sweats and hoodies. Some highlights included a red-and-white seersucker maxidress and the giraffe-printed T-shirts and hoodies. The big news for Primp, however, was the hoodie that Sasha Obama wore to school on her first day in Washington.

“I screamed when I saw she had on our peace-sign printed hoodie,” said Wells Butler, designer of Primp. “It was an exclusive for Bloomingdale’s so she must have purchased it there.”

Butler said she has an updated version of the print for spring-summer on T-shirts and sweats ready to go.

“It’s a great message that she’s sending by wearing the peace sign,” Butler said. “And we have many happy prints for a poor economy.”

The Primp collection wholesales from $32 to $65.

At New York-based contemporary line Ali Ro, the booth was filled with retailers looking at booking items in bright colors, such as a yellow-and-white cotton sundress, a silk chiffon printed tank and a silk knit printed halter dress.

“Stores are gravitating towards the bright, cheery colors and sexy pieces,” said Stacy Esser, president of sales at Ali Ro. The Ali Ro line wholesales between $89 and $130.