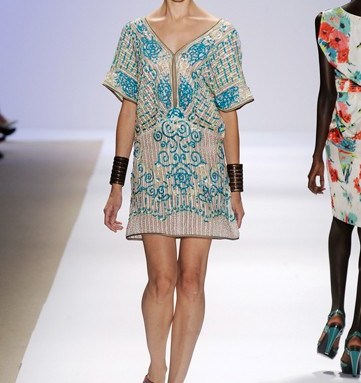 Retailers do want new merchandise — they just want it faster than ever before.

Coming off of what many consider the worst fall-winter shopping season ever, retailers had already cut back on orders for spring and were understandably even more conservative when ordering fall merchandise back in February. But as consumers’ moods seem to brighten and wallets open a crack, retailers are finding shoppers are feeling an urge to buy at least some new clothes. As a result, specialty stores are running low on merchandise and are nervous that come fall, they won’t have enough either. So many are placing orders for immediate deliveries.

“I have a lot of open dollars and haven’t really placed any fall orders. In this economy, we just can’t think so far ahead,” said Stacey Pecor, owner of the four Manhattan-based Olive & Bette’s stores. “Placing orders for immediates is the only way to do things nowadays. Just last week, girls were looking for white dresses to wear for graduations, so I placed an order on Monday with a brand called Envy, the dresses were in the stores by Friday and I sold them all weekend.”

Pecor said that when she was scouring the trade shows earlier this month, she was surprised that Intermezzo had very few vendors willing to work with her on immediates. The Fame and Moda Manhattan shows were better for that, she said.

“I started this business in the first place as a destination that reacts to the trends, so in a way, we are going back to that and we need these goods fast,” Pecor said. “Immediates are available, it may not be exactly what I wanted and it is a lot more work to find the right things, but they are there.”

Randi Siegal, who owns ShopRapunzels.com and the three Rapunzel’s Closet stores in Palm Beach, Fla., said she also has found more of a need for immediates.

“These last few months our vendors had lots of immediates, I guess from bounced boxes from stores that closed,” she said. “But now it looks like they are cutting closer to what is ordered. I think that these vendors need to cut extra of their bestsellers because if a store runs out and wants more, they will be missing out on sales.”

For vendors, this is easier said than done. Manufacturers are finding the need for immediates to be particularly challenging in this economic environment, especially as they work to keep inventories leaner than ever.

“It’s very difficult for us because over the course of the last year, we got stuck with so many goods, and we now have to be lean on inventory,” said Jane Siskin, chief executive officer of L’Koral, the parent company of such contemporary brands as Elizabeth & James and LaRok. Siskin said L’Koral attempts to work with the retailers in whatever way it can. For example, there are a handful of core styles in Elizabeth & James — the boyfriend blazer and tailored blazer among them — which are almost always in stock and available for immediate shipping.

“For the most part, we tell our stores that we absolutely have to cut to sales and they have to order what they need according to the buying schedule,” she said. “If we overcut in hopes of getting orders for immediates, we are taking the risk and the retailers aren’t.”

Beth Bugdaycay, ceo of Rebecca Taylor, takes a similar stance on the idea of immediates.

“It’s just not our business,” she said. “We plan for very little excess, which prevents the overflooding of merchandise in the off-price market. Overall, I think that our retailers are used to our way of buying. We are noticing they are wanting value, they are being cost-conscious and looking for versatile pieces, which we work to provide. We also never push the buyers to overbuy, but rather to turn in cleaner orders and as a result, our sell-throughs have been great.”

For Tibi designer and owner Amy Smilovic, it is difficult to fill large orders for immediate delivery, but since she owns a warehouse in rural Georgia, the firm is able to keep some excess inventory there.

“We do keep some inventory on hand so that if something isn’t working for one particular store, we will happily switch it out for them,” she said. “We manufacture everything in China, so it’s not easy to cut for a quick delivery in some cases. But stores are certainly asking for more immediates.”

For those who still rely on domestic manufacturing, filling orders for immediate delivery is much easier. Susana Monaco, who manufactures everything in her Passaic, N.J.-based factory, can turn product quickly — in some cases in just about a week. The facility, which her father purchased about 45 years ago in order to run his private label suit manufacturing business, employs about 60 people and also holds stock on some of Monaco’s signature knit fabrics.

“I’ve had more stores than ever come to me for immediates, which has been great for my business,” Monaco said. “Having the factory in New Jersey is such a benefit. Nordstrom once needed us to fill a $120,000 order in three weeks, and we were able to do it, which is unheard of if we had to manufacture overseas.”

Nanette Lepore, who is a leader in the fight to keep New York manufacturing alive, is also able to turn product quickly.

“We are seeing that as people are becoming a tad more optimistic, stores are realizing that they either don’t have inventory or they don’t have the right inventory,” said Heather Pech, ceo of Nanette Lepore. “The consumer is not responding to cheap items, but rather they are looking to invest in pieces that make them feel good, so we have been filling immediates. Because we do it all — from pattern making to fitting and manufacturing — in New York, we can easily turn the product quickly.”

Pech said one particular dress on the line, a beaded number from the fall runway show, has been a hit — despite the high retail price of $900.

“We were not even going to produce this dress, but made the decision to cut it after we got an order for one,” she said. “As of today, we’ve sold 10 of these dresses and need to cut more.”