When it comes to prom, teens still crave a little glitz and glamour, even if it’s on a tight budget.

By Rosemary Feitelberg and Julee Kaplan on April 30, 2009
View Slideshow 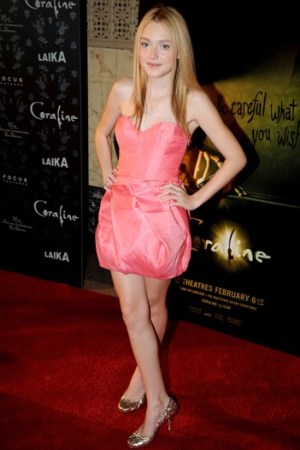 When it comes to prom, teens still crave a little glitz and glamour — even if it’s on a tight budget.

No matter what the trend — bold prints, bright colors, back detail, beading and crystals, cocktail dresses or long elaborate gowns — a range in price points is key this year, with some retailers offering dresses for as low as $50. Stores are also clammering for teen attention by having in-store events where shoppers can walk away with goody bags in addition to their dress.

Teens have been cruising the stores for months in hopes of finding that dream dress for prom. And, as it turns out, once they have it — no one better buy the same one. Teens are getting superserious about making sure their dresses are indeed one-of-a-kind, even setting up groups on Facebook that allow fellow classmates to post photos of their dresses. One example is a Facebook group from Horace Greeley High School in Chappaqua, N.Y. The group, called “HGHS Prom Dresses ’09,” encourages all girls at the school to post their dress choices on the page so no two dresses will be alike. The labels they’ve purchased (and posted) include BCBG Max Azria, Nicole Miller, A.B.S. by Allen Schwartz, Dina Bar-el, Tadashi and Niteline.

“I bought my prom dress a few weeks ago,” said Ali Peikon, a junior at the school. “I couldn’t find a picture online, so I wrote the designer name [Bianca Nero] and color [black and cream] on the group wall.”

Another group, called “Bitch That’s My Prom Dress!” started by a student at John F. Ross CVI in Ontario, Canada, encourages students to post photos in order to “avoid some catfights on the night of prom…because I sure as hell would start one with a girl wearing my dress,” the group’s creator writes.

Maxed out on conversations about prom dresses, Stephanie Liu, a senior at Emmaus High School in Emmaus, Pa., decided to illustrate the drama of it all with a comic for The Stinger, the school’s paper. In the “Maladies Every Prom Date Should Be Wary Of” strip, she defined “Same Dress Syndrome” as “a human disease that may occur when two people wearing the same apparel encounter each other and is characterized by dizziness, fainting or a sudden desire to pulverize the wearer of the offending garment.”

In a phone interview Wednesday, Liu said she wound up wearing the same outfit as another high schooler at her junior prom last year, but didn’t think much of it. But now that there is no shortage of conversations about prom dresses at her high school, she wanted to draw attention to the humor of preprom angst.

That angst is reaching retailers as they witness a downturn in prom spending because of the economy.

“Overall, luxury consumers have cut back their spending by about 10 percent [last year.] Expenditures on teen apparel in particular have dropped significantly since 2007, down 20 percent from 2007 to 2008,” said Pam Danziger, founder and president of Unity Marketing. Danziger said when it affects shopping for prom, affluent consumers — both teens and their parents — are being forced to become more selective in their purchases. “When it comes to something like a prom dress, which is typically only going to be worn once, the high-priced designer gowns may not be the way to go right now,” she said.

Apparently, even celebrities have not been spared from the economic crunch. Fourteen-year-old Dakota Fanning recently showed off her thriftier side by recycling the hot pink bubble-hemmed minidress she wore to the premiere of “Coraline” to wear to her prom.

Spending patterns for prom dresses pretty much mirror those for other categories, according to Christine Chen, principal, equity research specialty retail and apparel analyst for Needham & Co.

“I don’t think kids are not buying prom dresses just because times are tight. Proms are just like weddings. People aren’t going to stop having them because of the recession,” she said. “Along with everyone else, they are more price-conscious, but in this environment, retailers have stepped up their promotions. There are deals to be had.”

In terms of trends, traditional ballgowns have “gone out the window,” with more teens favoring cocktail dresses and brands they might not normally buy, Chen said. BCBG is a popular destination for prom dresses even though the store typically caters to shoppers who are out of high school. The company has been e-mailing the rundown on its prom offerings to potential customers. Guess by Marciano is another less obvious prom resource that is dipping into the prom dress business and hails the category on its Web site.

“I don’t think anyone is making huge bets on prom this season. As department stores have substantially scaled back on their inventories, there are not as many dresses to choose from even though dresses in general continue to be an important trend,” Chen said.

At Holt Renfrew, Barbara Atkin, vice president of fashion direction at the Toronto-based retailer, said teens are using prom as an opportunity to buy designer dresses ­— a strapless black, white and teal jersey dress by Alexander Wang has been a favorite, as have printed chiffon dresses from Elizabeth & James, all retailing for about $500. Bright red, blue and green cocktail dresses with ruffles, beading and crystals from such brands as Marc Bouwer and Nicole Miller are doing well, as are long, body-conscious gowns with back details.

“Maybe her mom is paying for half and she has to pay for the other half. Whatever it is they want something they’ve seen their favorite celebrity in — they want sexy, sparkle, glam,” Atkin said. “These girls are cruising the stores with their girlfriends, they are starting Facebook groups where other girls at the school can post photos of their dresses so that no two girls will have the same dress. Prom is big, this is their moment and they really don’t want to make sacrifices.”

With that said, Atkin said in the dress category she has been careful to offer a large range in prices. Overall, dresses sell from about $150 to $1,200, with the sweet spot for prom dresses ranging between $450 and $995.

At Saks Fifth Avenue, teens are going with dresses from BCBG, Laundry, A.B.S., Notte by Marchesa and Marc Bouwer, with most spending between $375 and $450. It seems $500 is the most teens will splurge on a dress, according to fashion market director Colleen Sherin.

“Young customers are looking to these brands for prom as well as for bridesmaid dresses. They have a lot of look for the money and that really is the magic price point,” she said.

Prom has always been a big season for Lord & Taylor, and according to Liz Rodbell, executive vice president and general merchandise manager, this year has been no different. Customers have been gravitating toward body-conscious gowns, when cocktail dresses were all the rage last year.

“Customers are looking for color and fashion for prom. She wants glitz and glamour,” said Rodbell. “She wants to be noticed.”

To drive traffic into the store’s Manhattan flagship, the retailer usually hosts a prom event. This year, it opted to focus on the contemporary customer by hosting a “Love at First Sight” event last Thursday that included TV personalities and best-selling authors Matt Titus and Tamsen Fadal, who cowrote the book “Why Hasn’t He Called?”, giving advice on dating and relationships, music from DJ Cat, massages, food and drinks, gift certificates and goodie bags for incremental purchases. The event was marketed through a customer invite, e-mail blasts, Facebook, Taxi TV, phone kiosks on the East Side and newspaper advertising. While the event wasn’t focused on shopping for prom, many teens took advantage of it in order to purchase their prom dresses and walk away with some free gifts.

For teens on a tighter budget, J.C. Penney has been a hot spot, as Siiri Dougherty, vice president and divisional merchandise manager for dresses and outerwear at the retailer, said prom shopping started out strong and early.

“These girls started shopping for their dresses as early as February, which is something that we haven’t seen in a long time,” Dougherty said. “Part of the reason for that is that we really focused in on an opening price point of $90 for a dress. We saw great success with the $90 dress for homecoming, so we decided to focus on expanding that offering for prom.”

Dougherty said teens are gravitating toward bold, bright colors such as coral, green and yellow. She said new this year are prints for prom dresses, something that hasn’t been as popular in past years.

Even Target, which is known for its low prices, but not for eveningwear, is selling prom dresses on its Web site. To appeal to a range of shoppers, all styles are $50 and short, with sizes running from 2 to 18.

Teens are buying short dresses in novelty fabrics at David’s Bridal, a 303-store chain, with prices of less than $120 being a key selling point. Floral patterns and animal prints are popular, as are cut-out styles and open backs, said Cindi Freeburn, vice president of public relations. This year, girls started buying prom dresses in February and March instead of waiting until April, which was more the norm last year. They have, however, been holding off on buying handbags, shoes and gloves until this month, presumably waiting until they had saved enough to do so, she said.

Increasing its offerings for dresses retailing from $189 to $229 has helped to boost upper-end sales. The chain has picked up prom dress shoppers who opted not to drop $400 or $500 in a specialty store, due to the financial climate, Freeburn said. A scholarship contest that required teens to personalize prom looks for themselves and their friends online also helped business, since many e-mailed friends asking them to visit the David’s Bridal site to vote for them, Freeburn said. In addition to the viral marketing, the retailer texted shoppers to remind them about the contest.

Even Freeburn has been surprised by this season’s prom business. “We’re in such a struggle with everything that is going on with the economy. I would not have predicted our prom sales being up versus last year,” she said.

Bud Konheim, chief executive officer of Nicole Miller, noted that more stores cherry-picked dresses that wholesale for $50 less than what they carried last year, which means a $100 savings for shoppers. While the company does not pursue prom as such, it always sees a bump in dress sales at this time of year at wholesale and in the 30 Nicole Miller boutiques.

“Nicole does not design prom dresses. To her, prom is a four-letter word. But she understands beautiful dresses and everything she makes is young,” he said.

“Girls don’t want to hear about oil prices or the economy. They want to look pretty in pink,” Konheim said.