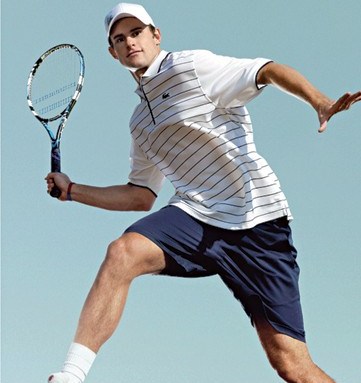 View ALL 7 Photos
Tennis apparel sales have hit an ace, with consumers wearing tennis outfits both on and off the court.

The sport is experiencing a higher growth rate in popularity than any other, with an 18.7 percent increase in participation in 2007, according to the National Sporting Goods Association. This growth — particularly in women’s interest — translates to traffic not only on tennis courts but also at tennis apparel retailers.

At the U.S. Open, the United States Tennis Association is selling tickets at a record pace. More than 660,000 tickets were sold prior to the start of the tournament on Monday, and the USTA expects attendance for this year’s Open to surpass the all-time record of 715,587 set last year. This creates retail opportunities both on the premises for brands such as Polo Ralph Lauren, which also dresses the ball girls and boys, and Lacoste that have stores at the Arthur Ashe Stadium, as well as throughout the rest of the country for brands like Nike that dominate the tennis category.

According to sporting goods and tennis associations, consumers are swinging rackets again and buying more clothing and footwear than in previous years. While sales and participation estimates vary, all groups contend tennis has regained its form, and is giving the active industry an opportunity to capitalize on the sport’s popularity with fashionable, high-performance looks.

“Tennis is alive and growing…and we intend to keep it that way,” de Boer said.

Players spent an average of $191 for tennis shirts, $67 for tennis dresses/skirts, $100 on skorts and shorts and $50 on tennis jackets, the 2007 TIA tennis consumer study found.

All of this is welcome news for active apparel companies.

Adidas is enjoying double-digit gains in its tennis category, growing in almost every region but mainly driven by Asia, according to the German active company. Even in the U.S., Adidas increased its total tennis business 10.1 percent from 2007 to 2008.

Reebok’s tennis business is up 62 percent in the U.S. from last year, fueled by the brand’s approach to women’s fitness as a whole, according to the active firm’s head of tennis, Dianne Hayes. Reebok features its star tennis athletes, including Jelena Jankovic, Amelie Mauresmo and Nicole Vaidisova, in its “Your Move” integrated marketing campaign.

In the last year, Fila has increased its specialty account base for tennis apparel by 40 percent, according to the company. Fila attributed part of the increase in sales to positive tournament results from its athletes, including Svetlana Kuznetsova, who was ranked third going into the U.S. Open.

“Our tennis business is healthier and stronger than ever,” said Danny Lieberman, Fila’s vice president of apparel. “More customers are buying our products. Accounts that have passed on Fila for the past few seasons have come back on board. Current customers have added genders previously overlooked. Current customers are buying more frequently throughout the entire year, meaning that we have a better flow of fashion throughout the year.”

Although Lacoste’s roots came from the tennis court, performance tennis represents less than 10 percent of the business today. But it’s been growing at 10 to 15 percent annually for the past three years, according to the company.

“Although as a percent to our total, pure tennis is small, it is the positioning of being the authentic and original tennis brand that really drives our DNA,” said Lacoste chairman Robert Siegel. “Our tennis business is quite strong in ’08, having aspirational players such as Andy Roddick, Richard Gasquet, Tatiana Golovin and Nathalie Dechy, to name a few, definitely positions us as an authentic tennis brand.

“After Andy plays a Grand Slam event like the U.S. Open, we get immediate demand for what he is wearing, including the cap, shirt, short and even the track jacket,” Siegel added. “In fact, our boutique at the foot of the entrance to Arthur Ashe Stadium sells what Andy wears on the court and is generally sold out after a few days.”

The good news for tennis apparel makers is that women account for 44 percent of all tennis players, according to the SGMA’s participation studies. The number of girls playing on high school teams shot up 53 percent between 1990 and 2007 to more than 202,000, and tennis was the sixth most popular girls’ high school sport. The number of boys playing high school tennis rose 28 percent in the same period. SGMA’s Sports & Fitness Participation report rated tennis as the second most popular sports category behind team sports and as the top traditional sport gaining participation from 2000 to 2006.

Mike May, director of communications at the SGMA, noted tennis’ new vigor stemmed from efforts by private clubs, public tennis centers, teaching pros and manufacturers as well as the support of QuickStart, an industrywide program introducing children to the sport.

“I see ads for it around the country whenever I travel, and it’s making a difference,” May said. “It’s exposing people to the great game of tennis. And you don’t have to play like a pro to enjoy the game.”

“Tennis clothes can be worn both in and outside the tennis court — to a cocktail party, to the office, to the grocery store — so there’s now a lot of crossover appeal to tennis apparel,” May said. “The technology used in tennis clothing today is revolutionary, and when you’re wearing these clothes it gets you in the mood to play tennis again. It makes you look and feel like a tennis player, so makes the whole experience much more positive.”

Thomas Doyle, vice president of information and research at NSGA, said tennis skirts and tennis dresses are worn more now in the fashion industry. “Serious players — especially if they are female — tend to dress better,” he said.

The TIA’s de Boer noted players who used to simply wear T-shirts are switching back to performance tennis gear because “tennis fashion has definitely improved with technology and new fabrics. Players enjoy looking better and having more choices. T-shirts get wet, heavy and restrictive, unlike the new lines of activewear. Kids may prefer T-shirts, but more mature players go for better materials and better looks.”

Major tennis labels are investing heavily in designing, developing and growing in-house tennis apparel lines, she stressed. “People are wearing tennis apparel not only on the court, but off the court in their everyday activities.”

Tennis is growing faster than other sports because “tennis is for everyone,” de Boer said. “And what other sport has women in their 80s and older running around in miniskirts and Lycra fitted tank tops?”