The Man Repeller, PJK Team Up for Sportswear 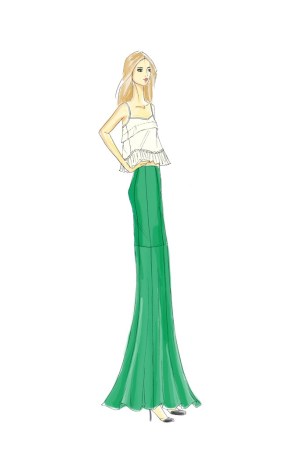 The collection, which will bow at the Coterie, is a cross between PJK creative director Chelsey Santry’s feminine West Coast-infused aesthetic and Medine’s edgy New York style.

“The collection will be wearable insanity — in the coolest sense of the word,” said Santry. “It will be whimsical, colorful and playful.”

It can be dressed up for a more serious look or relaxed to look tomboyish, she added. “There are leather jackets you can wear out at night; quirky graphic Ts, and feminine, girly dresses that go under a big army vest.”

The MR x PJK collection will be shown at the Coterie, sporting hangtags that feature a “Repel-ometer” — essentially a tongue-in-cheek rating system attesting to the level of “man repelling” in the item. This is based on Medine’s point of view that trend-driven fashion pieces don’t appeal to the opposite sex.

“I love their young spirit and the accessibility of their brand,” said Medine. “Jane [Siskin, president of parent Jaya Apparel Group] is really smart and committed, and I wanted to align myself with them.” She said she’d love the clothes “to repel” the opposite sex, “but Jane is very smart and said we just can’t put fur pom-poms on everything!”

In 2009, Jaya, formerly L’Koral Industries, launched Patterson J. Kincaid trendy sportswear at the opening price point of contemporary. Siskin said the company had been talking about the idea of collaborating with a blogger or a stylist for PJK. “We went through our wish list and Leandra was at the top. We have a relationship with Creative Artists Agency,” which represents Medine, she said.

The new brand is priced higher than PJK and includes dresses, skirts, tops and knits in silks, chiffons and cottons. Retail prices for MR x PJK range between $198 and $398, compared to PJK’s tags of $98 to $198.

“Everything has an attitude. Leandra’s personality shines through in every piece,” said Siskin, who said Medine collaborated with Santry on design. “She free-associated what girls would want to wear for next spring, and we [came up with] things that embodied her words. It just happened organically.”

The Man Repeller clocks 3.5 million page views a month, and came in at number one on Adweek’s “Fashion’s Power 25” list last September.

MR x PJK will have a limited offering. “We’re teaming up with key retail partners who are doing events that Leandra will host,” said Siskin, who declined to project first-year sales. The line will also be sold on pjk.com.

Mitch Grossbach of Creative Artists Agency, who through its Fashion & Beauty division, represents designers and other talent, added: “MR x PJK provides an additional access point for Leandra to connect with her fans and followers, while extending her Man Repeller brand into new areas of business.”