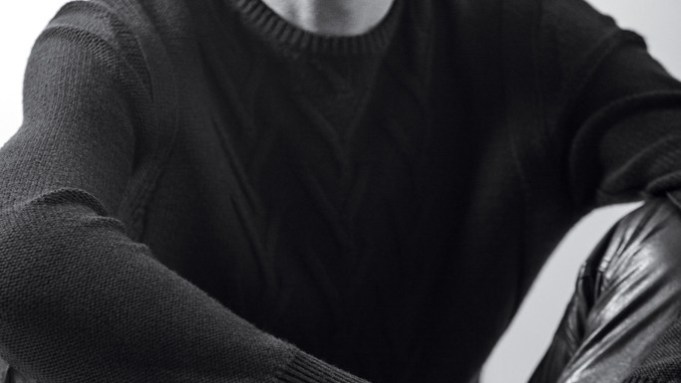 NEW YORK — The men’s contemporary market is thriving at retail and Theory, a pioneer in the category, is aiming to capitalize on the trend.

The company, a unit of Japan’s Fast Retailing Co. Ltd., is undertaking a number of key men’s initiatives this year, including:

• The launch of a full-canvas tailored clothing program.

“We are [pleased] about what is going on in men’s wear in total and believe that the time for contemporary men’s wear is now. We’ve seen such incredible excitement and enthusiasm from retailers about the contemporary side of men’s wear in general and what we’re doing in particular,” Theory cofounder and chief executive officer Andrew Rosen said in an interview from his expansive corner office at 38 Gansevoort Street here, five floors above the Theory flagship in the Meatpacking District. “Our men’s business has really been growing and we’re adding more of our own retail stores, as well as building out shops in department stores and really making a stronger mark and taking a more important foothold in men’s globally.”

Men’s sales at Theory now top $100 million a year, posting over 20 percent growth last year. While men’s is only about 15 to 18 percent of total Theory sales at this point, the business is growing at a slightly faster pace than women’s, said Rosen.

“In terms of the value and the construction and the quality, this is really best-in-class. We elevated it to be this guy’s staple suit at a price point that is the best value in the market,” said Andrew Berg, Theory’s vice president of men’s merchandising and sales.

“Most suits at our price point are a fused construction. This is full canvas and it’s loosely basted by hand, so that the suit molds to the shape of your body. The more you wear it, the better it looks,” said Ben Stubbington, director of men’s design at Theory.

The full-canvas suits feature all Italian fabrics, more hand stitching on the interiors and a slightly higher button stance and a raised notch lapel, for a more modern look. The suit jacket comes in the Wellar fit, which is available in notch lapel, peak lapel and double-breasted styles. The notch lapel model has both flap and patch pocket options. The pants for each jacket are in the Marlo fit, which is a core, slim straight leg silhouette.

The full-canvas assortments are available in 14 suit fabrics — ranging from wool blends to 100 percent cashmeres — and two tuxedo fabrics.

“We are really excited about the addition of this full-canvas collection,” said Kevin Harter, vice president of men’s fashion direction at Bloomingdale’s, which carries Theory in 27 of its 31 total men’s doors. “We’ve had a lot of success with Theory suits in general and the full-canvas is a big plus that I think will really resonate with contemporary suit buyers. The contemporary tailored market is a hot business and Theory is a terrific suit for the body-conscious, fashion customer.”

Retailing its suits as separates has been a competitive selling point for Theory, said Rosen. “When we are picking fabrics and patterns we are choosing for versatility. A guy can wear the jacket with jeans, if they want. And they can buy just the jacket or just the pants. The men’s wear industry for a long time was set in its ways. We are trying to address the modern way of dressing the modern guy. I think that’s important.”

To support the launch of the new suit program, Theory will unveil this fall a tailored clothing-focused marketing campaign under the theme “What Suits You.” Shot by Peter Arnell, who has worked with the brand since fall 2012, the imagery shows men wearing Theory tailored clothing in a variety of environments. “We didn’t really have a men’s campaign before,” said Berg. “The men’s business has grown up a lot here and we’re putting a lot of energy behind it.”

About 25 percent of Theory’s men’s sales is in tailored clothing and 75 percent in sportswear and other categories. Woven shirts, bottoms and tailored sport coats are the three biggest classifications for Theory. Accessories, which comprise less than 5 percent of men’s sales via cold-weather items like gloves, represent an area of future growth potential, said Rosen.

This fall, Theory will open its first store in Europe that carries men’s wear — a 2,700- square-foot, dual-gender store in Paris. The shop will combine two buildings at 10 Rue de Grenelle. Rosen said opening more men’s retail locations in Europe is part of Theory’s strategic growth plans, but no further leases have been signed.

Similarly, Theory intends to enter men’s wholesale distribution in Europe for spring 2014, but those plans are still being fleshed out. Theory currently operates women’s stores on Rue Saint-Honoré in Paris and on Marylebone High Street in London, in addition to women’s-only concessions in European department stores.

In total, there are 240 Theory-branded retail locations worldwide, counting both freestanding stores and shops-in-shop in department stores. Including wholesale, there are 800 Theory points of sale around the world.

The Theory men’s business is particularly strong in Japan. Last month, the company opened its 40th Japanese men’s shop-in-shop in the Fukuya department store in Hiroshima.

In China, Theory sells men’s wear in two of its own dual-gender shops in Shanghai and Beijing, with 10 other stores in that market selling only women’s. The company has partnered with Lane Crawford to introduce men’s wear in several of the luxury retailer’s stores in China. (Theory operates all of its global stores and wholesale distribution directly, apart from South Korea, which is a license.)

In the U.S., Theory opened a store with a dedicated men’s section earlier this month on North Beverly Drive in Los Angeles. The company also recently renovated its existing Melrose Avenue store and moved men’s to the front of the space, providing a separate entrance for it. Theory now operates 16 full-price stores in the U.S., eight of which carry men’s wear.

Denim is a category that has always been incorporated into Theory’s assortments and the brand is putting a new emphasis on the category. “We created a destination in our stores in a different way this season,” said Berg of the denim effort. “Coming into fall, we’ve developed a secondary fit in denim.  We have an opportunity to have our own point of view. Our denim has stretch. It feels authentic but with a more contemporary point of view.”

For fall, Theory is offering the Haydin straight leg and Raffi skinny leg in five-pocket styles, in fabrics like true indigo denim, black denim and colored twill. Retail prices in denim range from $225 to $295.

Also new this year is the performance-driven Theory 38 label, which encompasses both workoutwear and active-inspired streetwear. The collection launched exclusively at Theory stores, theory.com and Bloomingdale’s stores this spring.

“It’s shorts that you can run in, as well as shorts you can just wear on the street. It’s a sports design, but made for the urban environment,” said Rosen. “There are a lot of performance fabrics and we have sweatpants that are a cool shape and not your traditional baggy sweatpants. It’s great stuff for traveling but you don’t look like a slob, you look hip.”

Harter said Bloomingdale’s has enjoyed “incredible” sell-throughs so far with the Theory 38 launch. “Theory is building a solid lifestyle brand and building out everything that a guy needs in his wardrobe,” he said.

Rosen said fit has always been a hallmark of Theory and central to its growth. “The fit and the feel of a garment are what I started the business with 15 years ago and we continue that,” said Rosen. “For bottoms, everyone comes to us for those, they love the fit. In our sweaters and polo shirts and T-shirts, we have the perfect cut on the shoulders that’s very clean and sharp.”

Theory leases more than 30,000 square feet at 416 West 13th Street — about a block away from its headquarters building — that houses design studios and sample-making facilities. “We make a pattern and a 3-D garment here, so we have much more control over the fit. We can scrutinize things in a way you can’t when a factory is doing the pattern for you,” explained Stubbington. “It’s been that way from the beginning of the company. We have an extremely tight tolerance for any variance in the fit of a finished product.” (The actual line production of clothes is outsourced to third-party factories in Asia, the U.S. and South America.)

In fiscal 2012, which ended in August, Theory generated record profits, according to Fast Retailing. More recently, for the six months ended in February, the Theory business performed to plan but profits decreased marginally due to higher marketing and personnel expenses in the U.S.

While Theory is putting a concerted emphasis on its men’s business, Rosen declined to make any projections on sales increases or target goals in the business. “My philosophy is a very simple one: I believe that the better your clothing and the better you execute your clothing, the more business you’re going to do. I don’t look at things specifically as trying to push the volume,” he explained. “The size of our business is dependent on our ability to execute, both from a design perspective and sales and marketing perspective. I’m always trying to work with our guys to push the integrity and the authenticity of the Theory experience vis-à-vis what we are trying to do, rather than the volume.”