Things to Know at the Las Vegas Shows

Key happenings and events at and around the trade fairs. 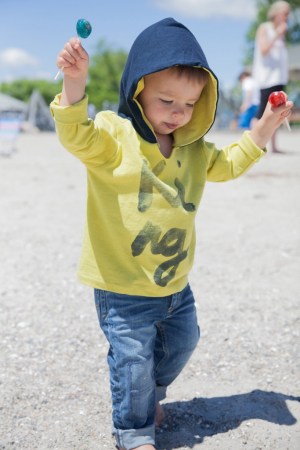 ENK VEGAS GETS ETHICAL
ENK Vegas is on a mission to promote women’s brands that make not only stylish product but also a social difference in the world. As part of a group called Conscious Collections, the selected 46 brands immerse themselves in philanthropy, fair trade, organic materials, ethical production, social consciousness and working with global artisans. Among them are jewelry maker Gorjana, accessories brand Whiting & Davis, Fisher Project from apparel label Eileen Fisher and casual clothier Michael Stars. — Khanh T.L. Tran

ENK VEGAS’ CO.LAB GOES ON SAFARI
For its third iteration of design collaborations offered exclusively at the trade show, ENK Vegas is going on a chic African safari. Under the Co.lab grouping, Ben-Amun went tribal for a necklace and bracelet, as did StyleStalker for a blazer with beading. Zebras inspired a raglan-sleeved hemp T-shirt from LNA as well as a water bottle from S’well. McGuire designed black ripped cargos. — K.T.L.T.

FREE TRADE IN THE MIDDLE EAST
On the 10th anniversary of the Qualifying Industrial Zones trade agreement that allows for certain duty-free benefits between the U.S. and Egypt for goods manufactured with Israeli-made materials, diplomats from the three nations will commemorate the occasion at a ribbon-cutting ceremony at the Egyptian Pavilion at Sourcing at MAGIC.

BOYS WILL BE BOYS
As the mother of three young sons, actress Melissa Joan Hart knows a thing or two about outfitting boys for an adventure. And she’s going to MAGIC’s Playground to show off her knowledge as manifested in the boys’ clothing line, King of Harts, launched this spring with her husband, Mark Wilkerson.

Setting up camp in booth 50304, Hart will take buyers through the American-made collection of jeans, T-shirts, hoodies, button-up shirts and military-inspired outerwear, all retailing from $32 to $88. As for the Hollywood mom’s ultimate seal of approval, her sons — Mason, Brady and Tucker Wilkerson — model the togs for the company. — K.T.L.T.

Also making their debut under a pink neon sign and banner of a yellow rising sun are two new apparel brands: Another Important Culture and Tokostyle Impressine.

“It’s MAGIC’s responsibility to bring the world to Vegas,” said Chris Griffin, president of Sourcing and WWDMAGIC. “When properly presented, buyers love the idea that they can have a taste of Tokyo fashion in their boutique.” — K.T.L.T.

SOURCING WITH GLOBAL ARTISANS
As a growing number of consumers seek products that have been crafted with an artisanal touch, Sourcing at MAGIC is introducing an emporium dubbed Global Artisans. There, 10 artists from the Philippines, Cambodia and Nigeria will display an array of handmade clothing, jewelry, scarves, handbags and shoes.

“[With] this compassionate consumerism movement, we’re trying to give it a platform and are bringing in artisans from around the world,” said Chris Griffin, president of Sourcing and WWDMAGIC. The emporium is open Feb. 16 to 19, Las Vegas Convention Center South Hall, Level 2, Booth 90402-90407. — K.T.L.T.

SPA DAY AT CURVENV
For the second time, CurveNV is sponsoring a resort and spa program that invites 20 buyers representing 350 properties including the Cosmopolitan Hotel, Four Seasons’ Beverly Wilshire Hotel and other posh resorts from the West Coast and Midwest. The purpose is to view loungewear, cover-ups, accessories and lingerie from 40 brands, including Hanro, Pluto on the Moon, Carmen Glaser and BedHead Pajamas.

“Our brands are looking for new areas to develop and grow,” said Pierre-Nicolas Hurstel, chief executive officer of New York-based CurveExpo. “They want to find places where there is a real buying experience. Resorts and spas are a good start for them.” — K.T.L.T.

ONE-STOP SHOP
WomensWear in Nevada once again takes place at the Rio Hotel. The show bills itself as one-stop shopping for women’s apparel retailers and offers vendors ranging from contemporary and misses’ lines to tall and petite collections. WWIN also includes accessories.

Complimentary breakfast and lunch is available. Shuttles, located at door 21 of the North Hall, will take attendees to and from the Las Vegas Convention Center for WWDMAGIC. Shuttles are also available to Bally’s for the KIDShow. — Kari Hamanaka

TREASURE HUNT
OffPrice, which added about 1,000 square feet, has more than 500 exhibitors across some 1,300 booths. Footwear, accessories, activewear and men’s wear have been expanded and the Cash & Carry section will total 65 booths, up from 53 at last February’s show.

OffPrice will again have a room dedicated to buyer information and social media, which was offered for the first time in August. It’s back and larger for February’s show and has an area for buyers to take selfies for OffPrice’s social media hubs as part of a contest.

ON THE AGENDA
A contingency of streetwear and action sports labels will show at Agenda Las Vegas. It’s not as large as its editions in Long Beach and New York, but brands showing include Zoo York, Vans, Diamond Supply Co. and Herschel Supply Co.

Curbside Apparel artists will be on hand to paint in the Pool Lounge. Custom bags from American Apparel and AKA, Angry Blossom temporary tattoos, an exhibition featuring items from the Irregular Choice Installation archives and performances by Get Down Art round out the mix of events and other happenings at the show.

CAPSULE COLLECTION
At Capsule, a few of the overarching trends include streetwear going high-end via brands such as Hood by Air and Off-White, along with — not surprisingly — activewear. Brands showing include Naked & Famous Denim, Black Pine Workshop, 18 Waits and Self Edge.

The cash-and-carry section, Donut Shop, features vintage merch from dealers such as Tart and Orange Crush along with ceramics and home goods from Los Angeles labels Bzippy and Scout Regalia. Editors from the men’s wear blog Selectism were tapped to pull their favorite pieces, which will be displayed at the show entrance.

BACK TO SCHOOL
Magic University launches this year starting with five e-courses aimed at retailers, entrepreneurs and other fashion industry professionals. Topics to be tackled include omnichannel, social media, trend forecasting, consumer demographics and sustainability in product design and development. Content will be e-mailed to program participants every three days; each track includes between three and five e-mails. Educational topics will be updated on a quarterly basis. Current offerings can be found at magicuniversity.co. — K.H.

SPANDEX STILL STRONG
Activewear is showing no signs of fatigue. Floor space dedicated to yoga and activewear at WWDMAGIC White is being expanded by more than 50 percent to 5,000 square feet. New additions include Rese Activewear, Zara Terez, Tono a Tono, Mika Yoga Wear and Satva. WWDMAGIC White is in the North Hall of the Las Vegas Convention Center. — K.H.

Zee will also serve as guest director for the women’s fashion show, offering commentary on what he deems standout brands. The runway event takes place at 2 p.m. in the North Hall, Booth 61517. — K.H.

PARTY TIME
Las Vegas isn’t known as Sin City for nothing. Trade fair organizers are hosting a string of parties for attendees.

n OffPrice is holding an opening night cocktail party in its Cash & Carry area on Feb. 15 as well as a closing night bash at Tao Lounge on Feb. 17.

n FN Platform is ringing in its fifth anniversary in Las Vegas with singer Taylor Dayne, who will perform at the FN Café on Feb. 17.

n On the other side of the Las Vegas Strip around the same time, Project is splitting hosting duties with swim brand Orlebar Brown for a cocktail party at Red Square.

n ENK Vegas and contemporary label StyleStalker are rounding up bloggers such as Sahara Ray, Margo & Me and Jen Agogo for cocktails and conversation in the Oasis area on the same day.

n Later that night, Capsule is throwing its usual shindig at downtown dive bar The Griffin.

n Pool is bringing the festivities to its lounge at the Mandalay Bay Convention Center with a happy hour on Feb. 17 and 18.

n FN Platform rounds up dapper dudes for a men’s cocktail hour on Feb. 18 at the Camp/Bond Lounge.

n For its official party at Light nightclub, also on Feb. 18, Project is hooking up with Eleven Paris to blast tunes spun by GTA and a special guest. — WWD Staff

RETAIL’S FUTURE — ROBOTS?
Nadia Shouraboura, ceo at Seattle-based Hointer, thinks robots are the future of retail, and is set to give a keynote address at Sourcing at MAGIC on the future of buying and inventory management using technology. Hointer has a specialty denim store in Seattle that allows customers to make selections and purchase items through an app, thereby eliminating the need for customers to sift through piles of pants and store associates having to clean up the mess.

The company helps other retailers install the same technology platform in their own storefronts.

HOLLYWOOD AT MAGIC
Learn about the creative process of costume designers or find out whether your line has the potential to make it big on set at a series of seminars being offered throughout the week. Speakers include stylists and designers from shows such as “Pretty Little Liars” and “Fashion Star” and plus-size model Emme. — K.H.

BUZZ ABOUT TECH
For the latest on new apps or social media trends, check out the Buzz Boutique. Representatives from Alibaba and TrueShip, among other companies, will be on hand and workshops will take place throughout the course of WWDMAGIC during regular show hours. Las Vegas Convention Center, South Hall, Level 2, Lobby. — K.H.

ETCH-A-SKETCH
Street-style photos are so 2013. Project is partnering with illustrator Sunflowerman (née Matthew Miller) to digitally sketch nattily dressed attendees at the expo’s #BloggerProject Lounge. Par for the course with street style, Instagram serves as the vehicle for sharing via the artist’s handle, @sunflowerman. — K.T.L.T.

NEST FOR NEWBIES
Following its debut in AccessoriesTheShow’s New York edition last month, Nest is heading to Las Vegas with a juried section of up-and-coming designers. Some of the brands to be featured include CoFi Leathers, Red Earth, Dona Bela Shreds, Kutula Kiss and Jamison Rae Jewelry. — K.T.L.T.

NEW VANGUARD AT MRKET
Proving that the hit animation movie “Frozen” has seeped into every corner of pop culture, MRket is adapting themes like “Polar Plunge” and “Danger Thin Ice” into its presentation of emerging men’s brands within its Vanguards Gallery. Hand-selected by Michael Macko, a former vice president at Saks Fifth Avenue, the section features more than 25 exhibitors, including C89, Hook + Albert, I.C. Richard Choi and ZB Savoy Bowtie Co. — K.T.L.T.

A NEW STITCH
Stitch is taking an elevated approach to contemporary women’s fashion with a new zone called Stitch Together. Nearly 50 brands hailing from the U.S. and Europe are slated to appear. Among them are Amour Vert, Viereck, The T Refinery, Nanà Nucci and Phillipe Olivier. — K.T.L.T.

CELEBRITIES MAKE THEIR PITCH
Several bold-faced names are making the trip to Las Vegas not to party but rather to work the trade show floor. On Feb. 17 at Project, Kellan Lutz will walk buyers through the fall collection for Abbot + Main while Brooke Burke-Charvet will promote her activewear line called Caelum Lifestyle. Then on Feb. 18, Nicky Hilton will unveil her new handbag collaboration with Linea Pelle at ENK Vegas.