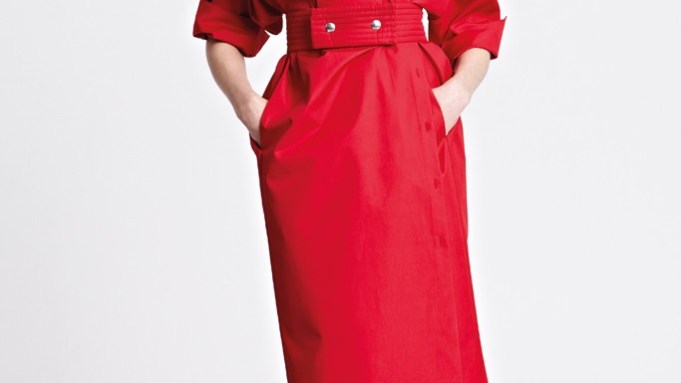 Thomas Pink is shining a spotlight on its women’s business.

The U.K.-based brand, best known for its men’s shirts, will unveil a new women’s wear concept today in New York that will be introduced to customers at its retail stores in late August. The redesigned 60-piece line centers around the white shirt but includes skirts, jackets and slacks as well.

Women’s wear, which was introduced at Thomas Pink in 1992, has grown to represent around one-third of the brand’s sales. But the offering has always been a second-class citizen to the core men’s range.

“When we started doing women’s wear at Thomas Pink,” said creative director Florence Torrens, “it was all about women wearing their husband’s, boyfriend’s or significant other’s shirts. They loved the looseness and ease.”

She said the new collection will play off that vibe. “We went back to the original idea of a slightly oversize shirt,” she said, adding that the new collection was inspired by iconic shirt wearers such as Diana Vreeland, Katharine Hepburn and Fitzwilliam Darcy of “Pride and Prejudice” fame. “We put them all in a pot and came up with this,” she said.

The shirts are designed to work with everything from jeans and loafers to business suits and tuxedo jackets and incorporate “form and function and frivolity,” Torrens said, noting that some of the shirts include feminine touches such as lace and details such as a pink button for the top closure.

Fifty of the 60 pieces in the collection are shirts, which will be available in fine Swiss cottons and poplins as well as silks. Hues range from bright white to ivory, but there are some shots of color and pattern as well. There is also a shirtdress that can be belted and buttoned in at least five different ways. There will be two jackets offered: a four-pocket tweed and a tuxedo jacket in wool mohair. Retail prices for the tailored shirts run from $160 to $250. Silk blouses are $250 to $500. Tailored pieces retail from $700 to $1,400.

In stores, the new collection will have its own dedicated section similar to the White Shirt Bar for men. Within that section, the shirts will be merchandised in various pigeon holes depending upon style and fit. Torrens said the sizing was simplified and the shirts will be available in small, medium and large.

“It’s really easy to shop,” Torrens said of the collection, adding that “the pieces we’ve homed in on are non-age-specific and versatile. They work for work or the weekend.”

Torrens said that Thomas Pink is still viewed primarily as a men’s brand but women’s is “a very important part of the business.”

Thomas Pink has experienced significant expansion since being acquired by LVMH Moët Hennessy Louis Vuitton 10 years ago, recently moving into South Africa and India and adding men’s tailored clothing to its mix. It currently operates more than 90 stores around the world.