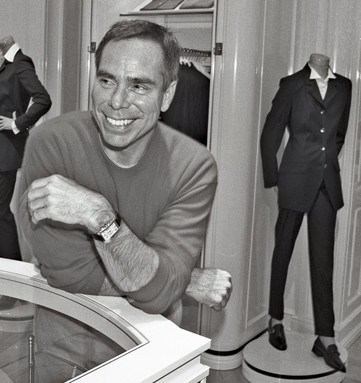 1987: Hilfiger’s distribution expands from the U.S. to include Central and South America and the Caribbean.

1992: Hilfiger goes public, making its debut at $15 a share in September and soaring to $26 in two months. Distribution expands to Japan. The company generates $107 million in revenues.

Hilfiger is awarded the Menswear Designer of the Year Award by the Council of Fashion Designers of America. Sales climb to $321 million.

2003: Hilfiger steps down as chairman of his company, assuming the title of honorary chairman and principal designer. Then-chief executive officer Joel Horowitz takes over as chairman. Co-chairmen Silas Chou and Lawrence Stroll leave the company.

Hilfiger becomes the official sponsor and supplier of the U.S. Freestyle Ski Team. Hilfiger also sponsors the Freedom America yacht, which wins Around Alone yacht race. Distribution extends to Australia. Inthe U.S., product launches include men’s leather outerwear and European socks, as well as H Hilfiger. In August, Horowitz steps down as president and ceo and is succeeded by David Dyer as president and ceo. Horowitz remains executive chairman through March 31, 2005. Company sustains a walloping $513.6 million loss, due mostly to a $430 million charge reflecting the cumulative effect of a change in accounting principle. Revenues inch up 0.6 percent to $1.89 billion.

2004: Beyoncé Knowles is featured in the True Star fragrance campaign. David Bowie and Iman are shot together for the H campaign.

2005: Hilfiger settles an 11-month U.S. Attorney’s office investigation over Fall 2000 commission prices and pays additional federal income taxes and interest of $18.1 million. J.P. Morgan is hired to find a buyer for firm. Hilfiger stars in a reality TV show called “The Cut.” The company celebrates its 20th anniversary during New York Fashion Week with a fashion show and a performance by the Black Eyed Peas. Distribution expands to Italy. H Hilfiger, a Federated exclusive, is pulled from the market and is reinvented for Hilfiger’s own stores. Product launches include True Star Men’s fragrance with Enrique Iglesias and True Star Gold, the second women’s fragrance under the True Star name and inspired by Knowles. Hilfiger opens his first store in Paris. The company reports revenues of $1.78 billion.

2006: On May 10, Apax Partners completes the acquisition of Tommy Hilfiger Corp. for $1.6 billion and takes it private. Hilfiger’s stock was trading at $16 on the New York Stock Exchange. Fred Gehring is named ceo of the Tommy Hilfiger Group, and Ludo Onnink, chief operating officer.

Hilfiger publishes his fourth book, “Grace Kelly: A Life in Pictures.” Distribution expands to the United Arab Emirates andNew Zealand. Product launches include children’s footwear in Europe, as well as Tommy 10, an updated version of Tommy and Tommy Girl in celebration of the fragrances’ 10th anniversary. The company sponsors golfer Nick Dougherty and partners with soccer star Thierry Henry as a brand ambassador for men’s formal and underwear. Henry designs a limited edition collection for the brand. Hilfiger’s volume is $1.7 billion.

2008: The company relaunches Tommy.com. In the fall, Tommy Hilfiger U.S. Sportswear is sold exclusively at Macy’s and the brand’sown specialty stores. Launches include Hilfiger, a men’s fragrance. Revenues hit $1.88 billion.

2010: Apax Partners sells Hilfiger to Phillips-Van Heusen Corp. for $3 billion. Hilfiger winds down its European license for handbags and small leather goods and plans to take the business in-house beginning in spring 2011.