The project marks the first commercial foray for the Japanese designer, who normally focuses on custom-made pieces

A look from the Tomo Koizumi x Pucci Capsule Collection

TOKYO — While the ongoing coronavirus pandemic has dealt several blows to both the fashion calendar and the industry overall, there are still some projects that promise a bright spot amid an often dark year. One of those is the collaboration between storied Italian house Emilio Pucci and Japanese designer and one of the eight recipients of the 2020 LVMH Prize Tomotaka Koizumi, known by his nickname Tomo. Between the loud, graphic prints associated with the former and the colorful, frothy ruffles favored by the latter, one can expect the capsule collection to lift moods at the very least.

The capsule will be unveiled on Saturday during Milan Fashion Week, but WWD spoke with Koizumi near his studio and home in Tokyo just a few days before he was due to board a plane and head to Europe for the first time since the start of the pandemic. 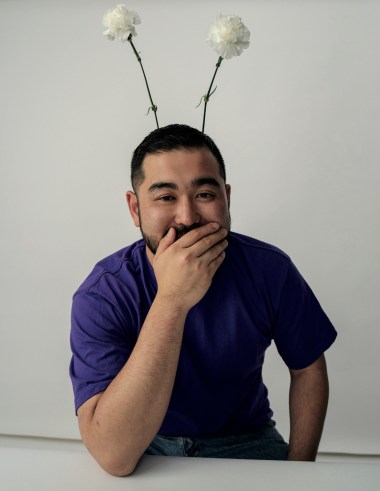 WWD: How did the collaboration with Pucci come about, and what was it like working with a brand based in another country at this time?

Tomo Koizumi: We started talking from the end of last year, so it was before [I was named a finalist for] the LVMH Prize when I got the e-mail. We planned to meet up in Paris, but Italians couldn’t come to Paris after their fashion week so we couldn’t meet. So I have never met them — we just speak on the phone, Zoom, and that kind of thing. It’s a bit weird, but still they have helped me a lot and provided everything I needed. So it’s not that difficult. We helped each other to make special stuff for this collaboration, and it was really fun to work with them.

WWD: What was most fun?

T.K.: Pucci has a lot of great heritage and archives, so they provided books, prints, samples and that kind of thing. Then I was able to take inspiration from all the archives. That was something I really wanted to do as a designer. It’s not the same as being the creative director of a house or something like that, but I was able to do something similar to that. Using their heritage and DNA with my own designs, and create something new.

When I decided to be a designer when I was 14, I really loved [John] Galliano’s Dior, so I always dreamed of [becoming] that kind of designer, mixing great creativity with great heritage. So I really loved being able to work with them. But still it was a bit difficult, because normally I could have traveled to Italy to visit them, see their palace and archives. So that part was a bit sad, but still I talked with them every day, we sent pictures back and forth, and it worked. It was one of my biggest dreams come true.

WWD: You are used to working mostly on your own. How was it working with a team?

T.K.: Normally I do only custom-made pieces, so it was a bit different doing ready-to-wear. But still I put my own custom-made DNA into the designs. We made all the samples in Tokyo and then shipped them to Italy, so even if the designs are different, I did kind of the same thing that I always do.

WWD: Was Pucci a brand you had ever dreamed of working with?

T.K.: “Yeah, because I’ve been collecting Pucci vintage for around 10 years because I really like Pucci prints. So I have some small pouches, a lot of scarves, card cases and that kind of thing. I just love their way of using colors, and also I already had a really big Pucci book even before they contacted me [about the collaboration].

WWD: Have you ever found inspiration from those things for your own designs?

T.K.: Of course. I really love what they do — it’s not totally my style because they have a lot of graphics, but there are also a lot of colors and it looks just fun. I really love the vibe the brand has. So I really loved Pucci even before this collaboration.

WWD: Aside from use of color, were there any other points of synergy you found when working with Pucci?

T.K.: I think we have a similar image of the women who wear our designs. They love to wear colors, they’re joyous, they love femininity. But above all, they’re not afraid to wear colors — like multiple colors. 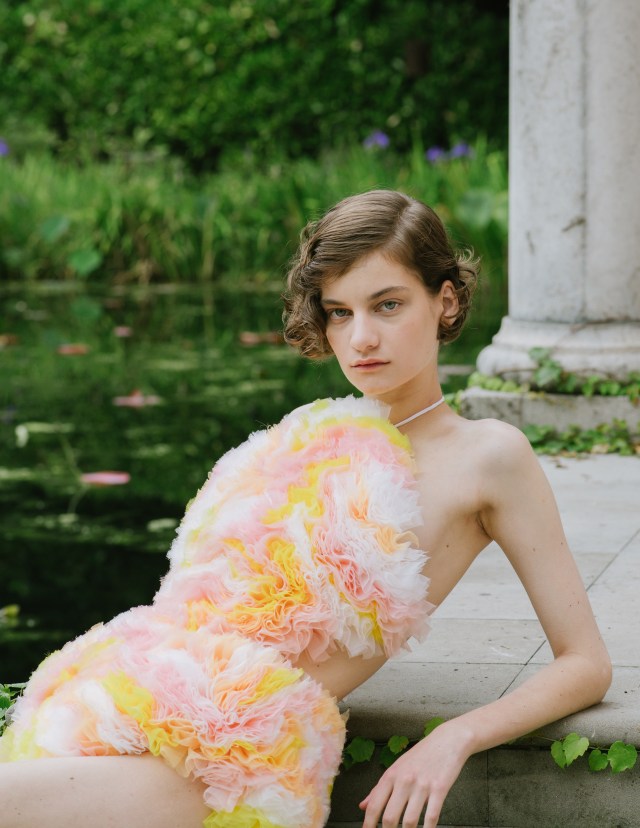 WWD: What is the biggest thing you learned from working with a big brand like Pucci?

T.K.: I was kind of nervous before starting, because I felt like I had to make something that would be like a bestseller. I don’t know why, but I felt a kind of pressure since I’m not used to doing commercial things. But actually I had a lot of freedom to design because I learned that what they needed was my highest creativity. I think freedom is what people want now, so in fact they encouraged me a lot so I didn’t have any stress. It was so fun, and I was really lucky.

WWD: Now that you’ve had this foray into more commercial fashion, do you think that’s something you might do under your own label in the future?

T.K.: People ask me all the time when I will do a commercial line, but I really like what I do now. I can keep high creativity with my own brand and my own collections, then I can do collaborations with commercial brands or big brands, so they can help me to keep my own brand going and also I can give them my brand’s energy and we can make something new and meaningful together. So I think it works well. Maybe if I wanted to be a millionaire I would have to make my own commercial thing, but especially in the current situation I don’t think I want to try that. I feel that it’s not necessary now. I don’t know; maybe in a few years.

WWD: Are there any other brands that you would like to collaborate with in the future?

T.K.: Pucci is luxury and colorful, but also I really want to do something with sportswear. And also maybe men’s sportswear.

WWD: Are there any other new categories besides men’s wear that you would like to experiment with?

T.K.: For my exhibition recently, I covered a chair in a carpet of ruffles and people really liked it, so I thought maybe I could do interior products like furniture or even small cushion covers. I think it would be fun.

WWD: You recently launched a bridal collection via a look book. What is the story behind that?

T.K.: We started talking in April. I collaborated with Treat Maison, which is a multibrand bridal shop in Japan that sells lots of imported brands. I worked with their studio and designed and directed the collection, but they made the dresses for me. We planned to bring the collection to New York Fashion Week, but since we couldn’t, we decided to make a good look book instead. So we did that in the end of August and released it on the New York Fashion Week date.

WWD: What is your main focus with your own brand right now?

T.K.: Starting from last September I decided to just make one collection a year. Since I don’t do commercial, I don’t need to have any season for my designs. It’s natural for me and it’s easier. Also it allows me to do a lot of special projects like this Pucci collaboration, or museum exhibitions. Things like this take time, as do custom-made pieces. But I like this cycle.

WWD: What are your plans for the future?

T.K.: I will keep doing the things I’m doing and try some new projects, but also I recently started a project to support young designers in Japan. I find new, young designers and chat with them, give them advice, and try to nurture their talent. I think this is what I have to do for this industry as well. The fashion industry in Japan is a bit different because it’s more commercial than, say, London. Before I had my first show in New York I searched for any kind of support that I could get, but everything is for commercial brands. So I couldn’t find any support for me, and I felt it was a bit boring. So since there’s nothing like that, I decided I can do it by myself. It’s not financial support, but I can support their creative side or connect them with editors and stylists in Japan or outside of Japan. It’s something I got in the past few years especially from [stylist] Katie Grand, so I want to pay something forward to the next generation. And also it’s good for myself because they inspire me a lot, so it’s not just one-sided. I don’t know, maybe in a few years or like 10 years I can have my own showroom introducing young designers. I would be fun. A showroom with my vision would be really unique, especially in Japan.

WWD: Did the pandemic affect your designs or business in any way?

T.K.: During the LVMH Prize, I was thinking I would have a small commercial line, because I thought the nominees had to have a commercial vision. But after the pandemic happened, I decided not to do it because it’s not the right timing to start something commercial.

It didn’t change my vision, but actually pushed me to try harder and to continue my own way of working. So I just keep doing my own thing, and I think it’s better this way. I feel like [larger scale] production and sales are really hard for me.

WWD: What do you hope that people will take away upon seeing your designs for Pucci?