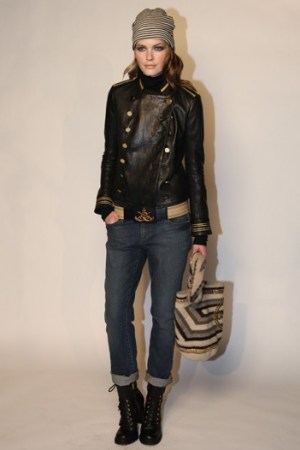 In an effort to expand its business substantially outside the U.S., Burch has signed two long-term Asian distribution deals — the first with Look Inc. in Japan and the second with Samsung Cheil Industries Inc. in South Korea. The deals will mark the first time the Tory Burch brand will be sold in those countries. With the new agreements, as well as continued expansion in the U.S. and Europe, sources said the more than $200 million firm could experience significant growth in 2009, despite the economic climate. According to Tory Burch president Brigitte Kleine, the goal is to eventually run businesses of equal size in the U.S., Asia and Europe.

The company’s deal in Japan gives the 47-year-old Look the exclusive rights to distribute and retail Tory Burch products throughout the country. As a partner with Look, Mitsubishi Corp. will import products into Japan. While the deal officially begins with the fall season, the demand for the brand in Tokyo has been so high the company has decided to launch with Isetan Shinjuku with a pop-up shop on the ground floor from April 8 to 15.

Executives at the retailer told Burch that in the month of January alone they received 350 phone calls from customers asking if they sell Tory Burch product. By February, the store received well over 1,000 calls inquiring about the label. The demand is such the store has set up a lottery system where only those customers with tickets will be able to visit the pop-up shop during the course of the week. Customers will also be given a limit to how many items they will be allowed to purchase.

“I always knew we would go into Japan at some point; it was just a matter of when,” Burch said Monday. “Our second month in business we were approached by someone who wanted to bring the brand to Japan, but I wanted to wait and grow here in the U.S. first.”

Once the pop-up shop closes on April 15, the brand will be carried throughout Isetan, with ready-to-wear in the apparel area and shoes and accessories in their respective departments. Look then plans to open freestanding stores in Japan, with the first one opening no later than spring 2010. In addition to Isetan, the fall Tory Burch collections will be sold in Hankyu Umeda in Osaka and in Takashimaya Nagoya. The goal is to open six freestanding stores and 24 department store locations throughout Japan within the next few years.

“Not only is Japan the second largest luxury market in the world, but I have traveled there a lot over the years and continue to find Japanese women to be very inspirational,” Burch said. “Also, we do get a lot of Japanese business in our stores in the U.S., so it makes a lot of sense for us to be there.”

In South Korea, Samsung will open a freestanding Tory Burch store in spring 2010, while it also focuses on opening in high-end department stores throughout the country. The target is to open in 15 stores in South Korea within the next few years.

“We want to be very careful to do this the right way and create the demand for the product without growing too quickly,” Kleine said.

With that said, Burch said the fashion company is not immune to the recession.

“We are affected, just like everyone else is,” Burch said. “We are growing, but not as fast as we could have been right now. We will pull back where we feel we should.”

Burch said that since it began expansion in Europe — the company opened a showroom in Milan last year — it has been looking at opening a boutique in London, which it has decided to delay a bit longer. The brand is doing well in Harrods, Selfridges and Harvey Nichols, but having a freestanding boutique in the city doesn’t seem like a smart move right now, Burch said.

However, the company has gained 30 new wholesale accounts in Italy, Germany, Switzerland, Belgium and the U.K. for fall. Burch said it could have easily doubled the number of new accounts, but in an effort to keep distribution tight chose to pull back where it could. For fall, the brand will be sold in 371 doors throughout Europe — 112 for apparel, 122 for accessories and 137 for footwear.

As for even more international expansion, Kleine said the company is actively looking for distribution partners in the Middle East (the brand is currently sold in select stores in Israel and Dubai), China, South America and Mexico.

Stateside, the brand continues to thrive, Burch said. There are at least five more freestanding stores planned this year with confirmed locations in Malibu, Calif., to open in late April, Orlando in July, Seattle in September and Palm Beach Gardens in October. By the close of 2009, the plan is to have 22 freestanding stores in the U.S. in addition to the brand’s 350 wholesale accounts here including Neiman Marcus, Bergdorf Goodman, Saks Fifth Avenue and Bloomingdale’s.

Sources have said Burch continues to discuss the sale of a stake in the company with several interested parties. However, sources said last month they doubted whether a price will be agreed upon since the designer doesn’t require immediate outside investment. Burch declined to comment Monday on a possible sale of a stake in the firm, which she founded in 2004.