The designer sits at the helm of one of the most digitally savvy brands in the fashion industry. 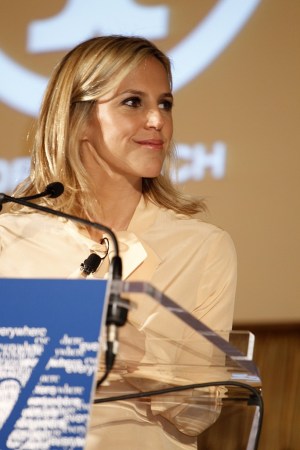 Tory Burch counts Mindy Kaling, one of the stars of “The Office,” as her first “Twitter friend.”

The two “met” about six months ago on the medium after Kaling tweeted to Burch’s attention, “I love you, Tory Burch, you closeted bling-loving Indian woman you.”

“Naturally, I had to respond to her,” Burch said at the WWD CEO Summit Monday, the first ever to be live-streamed on the paper’s Facebook page. “She’s so damn funny.”

The two have been tweeting each other ever since — even taking the next step and meeting face-to-face at the launch party for Kaling’s new book, “Is Everyone Hanging Out Without Me? (And Other Concerns),” which was hosted by Burch earlier this month at the brand’s Madison Avenue flagship.

Burch, who opened her session by self-deprecatingly confessing to the crowd that she’s always referred to as “technologically unfit” by her three children, now sits at the helm of one of the most digitally savvy brands in the fashion industry.

She said when she launched her company in 2004, her mission was to create a luxury brand that was accessible and socially responsible. Now, almost eight years and 61 freestanding stores later, Burch credits social media as critical to the company’s rapid growth.

She gave several anecdotes, such as the time she was fed up with the use of the nonword “irregardless” and tweeted “What nonwords bug you?” Burch was floored by the influx of responses she received from fans, who shared their favorite nonwords. Among other nonwords her almost 110,000 followers find that are overused: chillax, anyways and romantical.

Another tweet resulted from Burch bemoaning having to take off her shoes and go barefoot through security at John F. Kennedy International Airport (“Is it me or is everyone grossed out by having to go barefoot through airport security? Should I design a line of travel socks?”). This resulted in the creation of her travel sock, which has since completely sold out. And once, during an office baby shower, the team uploaded images to Facebook that were so well received that Burch was inundated by résumés from followers who wanted to “fill in” for the employees who were about to go on maternity leave (from this, Burch learned that “people want commentary on everyday life”).

While the brand doesn’t have the biggest following in the fashion world — it’s Facebook page has nearly 261,000 fans and others such as Dior, Gucci and Burberry have surpassed the five million “likes” mark — Burch contends that the community is a passionate one where two-way communication exists every day. She personally tweets from the handle

@toryburch and all content on Facebook and the Tory Burch blog is produced in-house, a collaborative effort between the editorial, marketing and public relations teams.

“We see our brand through many different lenses. We know instantly when there’s an extraordinary salesgirl, when a customer is frustrated or when a celebrity wears [our product],” Burch said. “We’re an open brand, which means accepting the good and the bad. When we look at criticism, we know we have to handle it in a public forum.”

For example, negative comments are never erased from social platforms such as Facebook. Instead, when customers voice complaints, an employee personally replies to him or her, rectifying the issue and, in turn, turning these people into brand advocates.

For Burch, toryburch.com is a portal that gives consumers entryway into “our world” and a place where commerce meets content. “Social media puts everything in real time,” she said. To that effect, products have links to relevant editorial content, the brand’s first runway show during New York Fashion Week in September was live-streamed on the site and a live Twitter feed is embedded into the homepage.

Earlier this year, the brand introduced a revamped Web site, mobile and Facebook commerce platforms (Burch believes that “social shopping is the future of commerce”) and a Tumblr page. Following the opening of her first Shanghai store last year, the brand launched Chinese Facebook and Twitter pages. Burch is also looking to get involved in newer platforms, such as the image-driven Instagram, Google+ and Pinterest, a digital pinboard that allows users to share common interests.

In addition to utilizing each medium in a way that’s fitting for the brand (“It’s one voice but all [the platforms] are different”) and avoiding what she calls “gratuitous promotions,” Burch said the key to success in the digital realm is authenticity.

“It’s in our own voice. It’s not forced, promotional or boring. We cover people we admire — from musicians to authors and other designers,” Burch said, adding that recent profiles on the editorial leg of the Web site have showcased Charlie Rose, Christy Turlington and Mario Batali.

She admitted that there was a learning curve, though, with respect to Twitter. When she began tweeting, friends were telling her that she had it all wrong and that her 140-character messages sounded contrived and too self-promotional. Burch rectified the situation by reading a book about Twitter and finding a way to have an authentic conversation with her fans.