After a long season of trade shows, a smattering of noteworthy brands managed to catch the attention of retailers. 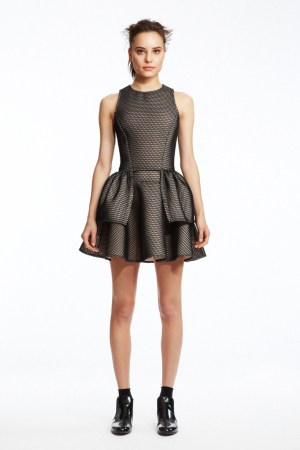 After a long season of trade shows that took over Las Vegas, New York, Paris and other cities, a smattering of noteworthy brands managed to catch the attention of retailers shopping Coeur, Brand Assembly, Designers & Agents, Select and the various showrooms in Los Angeles. Moreover, the California Market Center seized the growing interest in activewear to premiere a new expo called Shape, with 26 booths representing athletic-leaning companies such as Bench and Spirit Activewear. Here, brands to watch from the shows and a recap of the top trends identified by leading retailers who attended the market.

Brand: Prose & Poetry at Coeur
Debut Season: Fall 2015
Prices: $72 to $280 wholesale
Pedigree: A specialist in draping knits, previously at her namesake line and then at Three Dots in southern California, Pegah Anvarian has switched gears along with ZIP codes. Now based in New York, the designer has partnered with a private label manufacturer, which she declined to name, to produce dresses, skirts, tops and coats out of Neoprene, heavyweight cotton jersey, honeycomb-shaped nylon mesh, poplin and lace bonded to ponte. While influenced by activewear, she deviates from the usual sporty silhouettes by adding asymmetrical hems, puffing up sleeves and folding a variety of pleats. “I’m not interested in activewear shapes,” she said. “The shapes [in my line] are a little more classic and the fabrics are interesting. How to take a casual fabric and make it look dressy — that’s how I evolved.”
Signature Styles: With nary a pair of pants in the 42-piece collection, Anvarian lets customers show off their legs in minidresses and skirts. More demure customers can cover up in a sleeveless dress that features black lace bonded to nude-colored ponte for the bodice and polyester crepe for the floor-length pleated skirt. T-shirt dressing gets a peppy makeover with a pleated poplin skirt stitched to a cotton jersey tee. A plaid shirtdress proves its versatility via a wrap skirt that can be unfurled and worn over skinny pants. “Being able to dress anything up and down is perfect for the New York lifestyle,” Anvarian said. “It’s very L.A. as well.”

Trend: Activewear-inspired separates at Thomas Wylde Los Angeles
Retailer: Karen Meena, vice president of merchandising and buying at Ron Robinson Inc.
“That [active lifestyle] look has really resonated in all areas of fashion. I find even into couture, there’s elements of it. I see all of the designers are adding at least a few pieces. That’s expanded and there are a lot more brands doing that. Thomas Wylde has a new, sportier collection at a more accessible price point called Thomas Wylde Los Angeles. What I liked about it is, a store and a client can really put it together with their own individual tastes. [Thomas Wylde founder Paula Thomas] did some sweatpant [styles] that you could go out with but you could also run around the day in.”

Brand: L’Etoile Sport at Shape
Debut Season: Fall 2015
Prices: $40 to $135 wholesale
Pedigree: Three years after recasting athletic clothing worn to play tennis and golf with a preppy perspective, New York-based L’Etoile Sport is introducing a jaunty activewear line. With its blend of vivid colors, textured knits and stylish details like contrast piping, the activewear is landing in Net-a-porter.com and Poland’s S’portofino, the same fashion-centric retailers that also carry L’Etoile Sport’s main line. Even though the brand doesn’t sponsor professional athletes to endorse its wares, it doesn’t need to since it counts sporty celebrities as fans. Nicole Kidman dashed around Hong Kong in one of its white knit tennis dresses recently, and Ashley Judd donned its tanks, dresses and shorts to portray a tennis player in an upcoming comedy titled “Good Kids.” Its own founder and creative director, Yesim Philip, once played professional basketball in Europe.
Signature Styles: The inaugural collection includes 15 pieces, ranging from cropped leggings, Windbreaker hoodies and bras to track jackets, tanks and sweatpants cut out of cashmere, netting, waterproof nylon and polyester-Spandex. A seamless T-shirt molds the body, covering the chest and back with textured pin dots. Cashmere sweatpants display a fashion angle with a slight harem fit and wide bands for ankle hems. “We try to make it so you can wear it for multiple things,” said Lindzi Rebernik, director of operations for L’Etoile Sport, which posts annual sales of less than $50 million. “We’re not one of the brands where our customer buys one piece of clothing. Our customer is invested in the entire look.”

Trend: Bohemian at Cynthia Vincent
Retailer: Stephanie Kennedy, buyer at Revolve
“That boho-inspired gypsy inspiration from the Seventies was pretty cohesive within every collection. Big florals and peasant styles, the layered skirting and a lot of suede and fringe.…[Cynthia Vincent] was on point as far as trends go with our girl, 100 percent.”

Brand: AD Collection at Brand Assembly
Debut Season: Fall 2013
Prices: $120 to $700 wholesale
Pedigree: A partnership between designer Michael Abe and former showroom owner Lindsay Dixon Smith, Los Angeles’ AD Collection harks back to the versatile basics that Donna Karan popularized in the Nineties. Abe and Smith take one neckline — for instance, a deep V — and incorporate it into five silhouettes, including a bodysuit and dresses with hemlines that stop at the thigh, knee, calf and floor. Reversible styles, stripes and leather paneling prevent the core collection made of black, white and gray ponte from becoming too bland. Supplementing the line are novelty styles that incorporate Mongolian lamb fur and a fun color like kiwi green. After Shopbop.com had an exclusive to sell the line last year, it’s since expanded to about eight specialty stores, including The Tannery in Boston. Annual sales total less than $1 million.
Signature Styles: A reversible dress with zippered sleeves can be worn in black ponte on one side and gray jersey on the other. White Mongolian lamb fur is shaped into fuzzy sleeves that are buckled across the chest with leather straps. AD is appealing to savvy, stylish customers with its concept of customizing. As Smith put it, “women know their best assets.”

Brand: aB at Select
Debut Season: Fall 2013
Prices: $69 to $220 wholesale
Pedigree: AB is the latest offshoot of New York-based Bernardo Fashions, which produces outerwear under its namesake brand, Bernardo Men, Collection B and Ashley B. As the contemporary division, aB plays with real and fake fur, fuzzy textures, striking color combinations and nontraditional silhouettes. It lists Nordstrom as its largest retailer and recently broke into the e-commerce ranks at Revolve.
Signature Styles: A cocoon-shaped coat with a high-low hem exemplifies aB’s aesthetic. One version is crafted from boiled wool in a gray and cream windowpane print. Another style with a funnel neck features tiny nubs of wool peeking out of cottonlike tufts.

Trend: Cropped sweaters and outerwear at J.O.A.
Retailer: Karen Benge, senior buyer at Pacific Sunwear of California
“There were a lot of new updates to outerwear and sweaters, which are key for the fall time frame for our customer. [There were] lots of oversize silhouettes, ribbed necklines and mixed fabrications. Each piece felt special and more of a fashion item that the customer would need to buy to complete her look versus just to stay warm.…J.O.A. was on the mark with sweaters [and] outerwear pieces at affordable price points. From Sherpa-lined moto jackets to maxi wool coats to detailed cropped sweaters, they provided great pieces for fall transition.”

Brand: Fog Linen Work at Designers & Agents
Debut Season: 1993
Prices: $2.80 to $148 wholesale
Pedigree: Founded more than 20 years ago as a housewares company in Tokyo, Fog Linen Work finally brought its linen-based clothing and brass accessories to retail buyers on the West Coast. Owner and designer Yumiko Sekine produces all the garments in Lithuania, where she takes advantage of the centuries-old traditions of growing, weaving and sewing linen. While the colors and shapes appear basic — navy, red and off-white for boxy tops and triangle-shaped scarves — Sekine doesn’t care. Neither do the specialty stores like Mill Mercantile in San Francisco, Broome Street General Store in L.A. and Folklore in the U.K. that carry the line, which generates under $20 million in annual sales. The brand also operates stores in Tokyo and Cambridge, Mass. “Usually I design what I like,” Sekine said.
Signature Styles: Summarizing her fall collection as “simple and minimal,” Sekine blends linen with wool in tan and black herringbone that she fashioned into a wrap coat. She also enhances the movement on a pullover top by stitching side seams into subtly wide flaps. Serving double duty as turbans and sarongs, scarves pop in turquoise and bright pink panels that are attached to long braids.

Trend: Graphic tees at Madeworn
Retailer: Karen Meena, vice president of merchandising and buying at Ron Robinson Inc.
“I found a classic rock T-shirt that I think epitomizes L.A. fashion and we haven’t really had a great graphic T-shirt, I think, for a few seasons. I found, starting from spring-summer, my clients have been asking for them, specifically the classics. [Madeworn’s shirts] really look like their favorite worn-in T-shirts.”