The brand's founder discovered the wonders of charity at a young age.

A look from Obakki's fall/winter 2019 collection.

Treana Peake designs Obakki, a classic and refined contemporary collection based in Vancouver, but that’s just her day job. The Obakki Foundation, a nonprofit Peake launched in 2009, supports her charitable work in Africa, where the organization has installed more than 2,000 clean water wells, built 15 schools and hospitals and taught new skills to refugees displaced by civil war.

Peake’s path to the fashion industry was nontraditional to say the least. “I worked in psychiatry as a rehabilitation practitioner,” she said. “I was designing programs for people with strong developmental behavior issues at a hospital in rural Alberta. I have no idea how I ended up in fashion.”

Her interest in fashion “is less about the apparel and more about the creative process and the business behind fashion,” she said. “I love starting with a mood board and a concept, and using fashion as a canvas to bring it to life. You start with an idea and see it through to the final creation. I love where I am, designing these two things,” she said about the brand and her philanthropic work.

“I felt there was a need for a great, modern Canadian brand. We do all our own manufacturing and use all organic materials. Vancouver fashion has a reputation for being super-hippie. I wanted to make sure we weren’t hurting the environment and that we checked off all of the eco boxes,” Peake said of Obakki, which last year won Fashion Takes Action’s top sustainability prize last year. “At same time I’ve been doing philanthropy. A lot of my inspiration comes from my travels to different countries.” 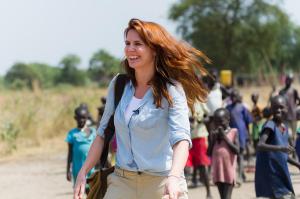 The Obakki Foundation sells limited-edition scarves designed to support specific areas in South Sudan, Uganda and Cameroon. When 500 scarves are sold, a clean water well is installed in one of the regions. Obakki, the brand, has contributed more than $3.5 million to the foundation since its inception and absorbs all administrative fees, allowing 100 percent of donations to go directly to charitable initiatives.

Pop-up shops in the fall will launch at Isetan in Tokyo and Holt Renfrew, Vancouver, featuring products made with partners in Africa. “There’s handwoven rugs, Namibian shea butter, and these really unique tribal wall hangings,” Peake said, adding that she’s in talks with several other international retailers. “These experiential pop-ups have different products, but they tell one story.”

Peake is working closely with African artisans such as Boubacar Doumbia, a celebrated textile designer in Mali, who designed tribal patterns for three textiles in five colors for the main Obakki collection. Earlier this year, a capsule collection sold at Isetan featuring scarves made by women living at Bidi Bidi, the world’s largest refugee camp in Uganda.

Peake said she’d like to share details about the hardships she’s witnessed, but “when you talk about how people in Africa are starving, people don’t know what to do with that. They want to know about the new colors for fall, rather than the hard bits. Even though I love both areas, I’ve found it’s so much easier to talk about clothing and the creative side.”

As a child, Peake learned that a single random act of kindness can have a big impact on someone’s life. “Every year, this white envelope of money would slide under the door,” she said. “It would help me and my mom get through the year. My mom would cry and put it in her purse. I thought, who is the person who would do this and not ask for anything in return. That set the benchmark. My mom didn’t know who it was. I wonder if that person knows what that little act would do. Now 2.5 million people have access to clean water.”