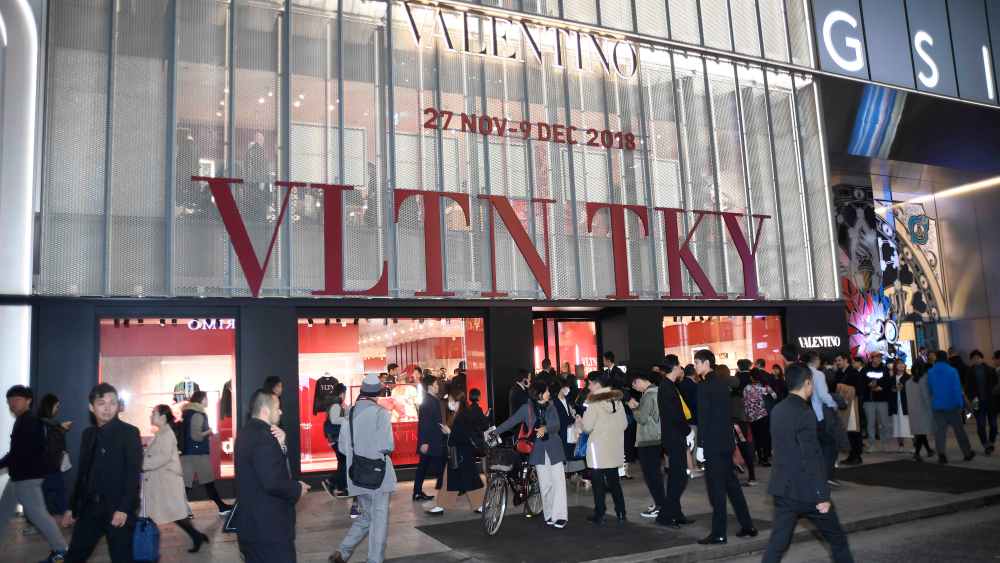 TOKYO — A day before it stages its pre-fall runway show in the Japanese capital, Valentino transformed its Ginza flagship into a temporary concept store conceived by creative director Pierpaolo Piccioli and Sarah Andelman. The store will sell a series of collaboration items, as well as an exclusive Tokyo collection, through Dec. 9.

Piccioli incorporated the concept of wabi-sabi into both the store concept and the pre-fall collection, while also drawing on another Japanese notion.

“I felt this word called ’ma,’ which we don’t have in Western culture, which is a word that represents the space between two structures, two elements. In Japan, even when you talk and you have a space in the conversation, it’s called ‘ma.’ So I felt that I had to run, to walk that ma to create a real and deep connection with the Japanese culture,” he said.

For the store, Piccioli collaborated with a range of Japanese artists, craftspeople and designers to produce both products for sale as well as art pieces intended for display only. The space is spread across five levels, with each floor representing a different concept. While some of the styles on sale in Ginza were created exclusively for the store, others will roll out to other markets at a later date.

The VLTN Kawaii Room in the basement has a new collection featuring five original characters inspired by Japanese manga and reinventing classic Valentino motifs, including a dragon, a butterfly and a snake. The cute cartoon characters appear on everything from pins and iPhone cases to Rockstud Spike bags.

The store’s main level is where collaborations with well-known Japanese brands are on display. A black Yohji Yamamoto bag is given pride of place in a showcase at the center of the store, while faux leather pouches by Undercover are adorned with Renaissance-style art mixed with elements such as a dragon or cherry blossom branches. T-shirts and sweatshirts embroidered by Doublet are equally double-branded, with one style even splashed with both labels’ logos, tonally stitched and intertwining.

The store is also debuting a new capsule collection, Valentino TKY, which includes T-shirts, sweatshirts, a leather iPhone case and the manga series. Special items created just for the Ginza store include denim and camouflage kimonos, a folding fan, Japanese geta sandals, a vinyl umbrella and cotton face masks, which are often worn in Japan in order to prevent the spread of germs.

But perhaps the most awe-inspiring aspects of the Ginza concept store are the artist collaborations. Photographer Izumi Miyazaki took a series of images featuring items from the capsule collection, origami artists Kyohei Katsuta and Satoshi Kamiya folded giant animals out of a single sheet of Valentino red paper, and Tetsuya Noguchi imagined a modern samurai in Valentino slide sandals.

Other traditional works of art and craft that are on display include hairpins by Takayuki Miura, Noh masks by Ichiyu Terai, lacquerware by Junichi Hakose and Tomizo Saratani, painted screens by Yuki Murabayashi, and large metallic jewels by Harumi Klossowska de Rola.

Much like the store concept, Piccioli said his pre-fall collection incorporates the Japanese ideas of wabi-sabi and ma, merging them with some of the traditional codes of the house.

“I wanted to create this kind of conversation between these two cultures, and I didn’t want to do anything like a souvenir of Japan. But working on the identities, the values of Valentino, the codes of the house as seen with a wabi-sabi perspective,” the designer said. “So all the ruffles, the bows, the flowers, the lace — everything is becoming more deep in a way. It’s less perfect, but with a sense of romanticism and also more daytime, more streetwear. With the idea of streetwear, which is not the American streetwear related to sports or leisure, but with the Japanese idea of streetwear, which is more cultivated in a way. It’s more sophisticated, and more personal, too. When you see people in Japan you feel that they are dressed to express themselves in a very personal way, to edit themselves in a way. And so that’s the way I was working on the collection.”

Piccioli elaborated that mixing red carpet elements with pieces that are intended for daywear is one way he is working to move Valentino into the future. Staging the brand’s first show in Tokyo since the Eighties is another.

“I’m trying to change the perception of Valentino for a contemporary world. I feel that Valentino has to change the idea of exclusivity into a more modern idea of inclusivity,” he said. “And I feel that the way you have to do it is also to go and to do relevant events. I think showing a new idea of Valentino here was a way to give relevance to the market and to underline the respect I have [for Japan] because we never did anything for years here.”