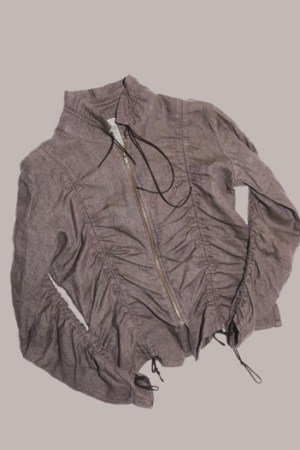 Ones to Watch: Olivia Latinovich

“Optimistic” was the buzzword last week at Moda Manhattan, which took place Jan. 5 to 7 at the Javits Center in New York. Designers noted their wares — women’s ready-to-wear ranging from evening dresses to T-shirts and tailored jackets — were being scrutinized for quality and value more than ever, though certain tweaks made to collections since the previous season seemed to be having an impact. Case in point: a wider range of sizes.

“I focus on the in-between woman, who is a bit older, so my sizing goes up more,” explained Jane Mohr, the designer of Dress to Kill, which is based in Los Angeles. Mohr has not changed her approach since the economy slid. Her motto, she said, “is if you’re a specialty store, you better keep it special, and that type of place is what my clothes work for.”

Mohr focuses on volume and silhouette, designing with a slightly masculine edge (clothes wholesale for between $85 and $200). “I do Euro styling without the euro price,” she said.

Echoing Mohr’s sentiments was Dana Harrison, owner of the Dana Emilia showroom, who has nine collections under her purview. “We’re accommodating more sizes,” Harrison said. “I’ve made other adjustments, like I used to have more European lines, but I’ve gone with more domestic lines. Americans feel the need to support U.S. lines, I think.”

One of Harrison’s collections, Hanna for La Journee, which wholesales for between $55 and $90, is indicative of the aesthetic of Moda this year: contemporary with flourishes — in this case, ruching on skirts and dresses. “We have a lot of repeat customers who have ordered again because they got such a good response last time,” Harrison said of the line.

Versatility is also an asset with certain lines, Harrison added. Redwood Court, which wholesales for between $60 and $115, offers a wide palette in silk and silk bamboo. That pastel-heavy color scheme was apparent at other booths, as well, including lime green suits at Stephen Burrows and bright Floridian patterns at K. Madison. Harrison noted the pastels and the larger sizes were additions to the Redwood Court line, to which retailers had responded favorably since the show started.

“We’re looking for pieces that pop in the store,” said Cheryl Glense, owner of Ritsi in Montreal. “November to spring is a tough time, and our customers are looking for fun things. If it’s different, they’ll pay.”

Indeed, retailers were eager to find specialty items this year in part to satisfy more critical shoppers. “I think the real story that we saw developing on our floor was that the state of retailing is much healthier this year than last,” said Britton Jones, chief executive officer of Business Journals Inc., the organizer of Moda, Fame and AccessoriesTheShow. “Retailers came in with a hunger, more cash and bought more aggressively.”

Jones noted, however, that the number of exhibitors was “essentially flat” compared with January 2009.